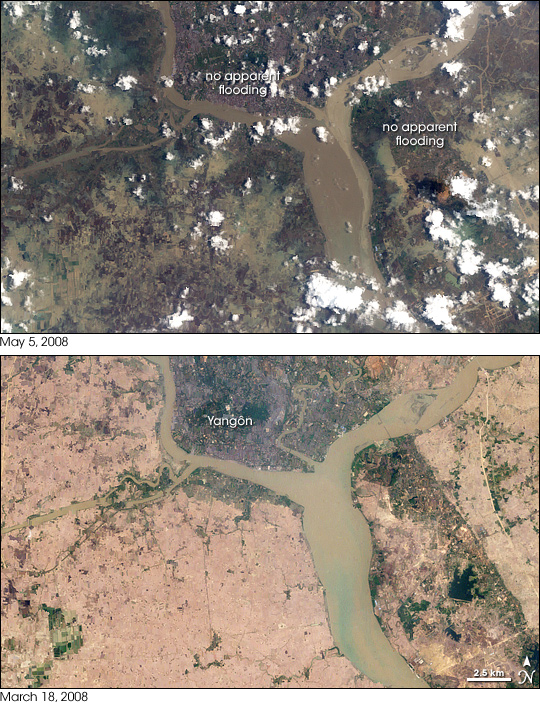 The city of Yangôn (also called Rangoon) in Burma (Myanmar), is tucked into a “V” between two rivers that empty into the Gulf of Martaban through a large estuary. When Cyclone Nargis passed over the city in the first week of May 2008, the entire coastal plain flooded, surrounding Yangôn with water.

This pair of images from NASA’s Landsat satellite shows the city and surrounding agricultural land before and after the storm. On March 18, 2008, the built up part of the city and its suburbs appear bluish purple, fallow cropland is pinkish-tan, and vegetation is dark green. The wide rivers are a muddy green.

After Nargis inundated the area with heavy rains and storm surge, standing water covered almost the entire area. As of May 5, flooding in the heart of the city appeared to be less than in the surrounding areas. (Flooding probably exists, but it may be at a smaller scale than Landsat is able to detect.) However, all the land to the west and southwest and most of the area to the east and southeast are still submerged. Across the river to the southeast of the city, a swath of relatively dry land—perhaps higher in elevation, or protected by a levee—extends toward the lower right corner of the image. Across the rest of the scene, standing water varies in shades from muddy brown, to green, to purplish blue.

You can download a 28.5-meter-resolution KMZ file comparing before and after the cyclone near Yangon suitable for use with Google Earth.