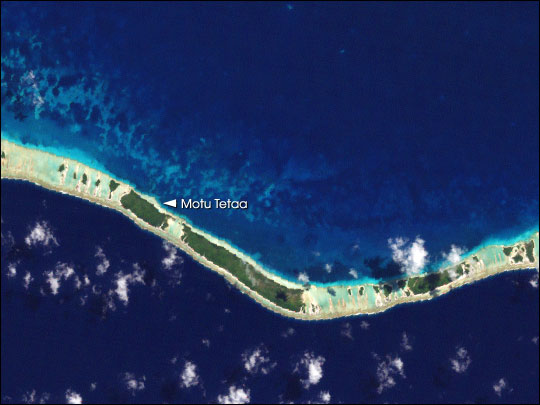 In the past decade, large numbers of coral reefs have died suddenly, leaving once thriving marine communities barren. This phenomenon, known as coral bleaching, occurs throughout the tropical oceans of the world. In 1998 a particularly severe bleaching event struck the corals of the Rangiroa Atoll in French Polynesia. Not only did large numbers (more than 99 percent of the pre-bleaching cover) of fast-growing Pocillopora corals die, but colonies of slow-growing and resilient Porites coral also died (more than 40 percent of the pre-bleaching cover).

Extreme temperatures and increased solar irradiation are the main causes of coral bleaching. During the 1998 bleaching episode in Rangiroa, a record-breaking El Niño raised the sea surface temperature almost 1°C higher than the normal highs for that period of the year, and held it there for three months. Such sustained high temperatures had never before occured in the 50 years temperatures have been recorded in the region. (Although a 1°C increase over three months seems trivial, it is the equivalent of a summer-long heat wave.) This suggests that the coral were killed by the high temperatures.

If conditions in Rangiroa returned to normal, it would take about 100 years for the Porites coral to regrow. Unfortunately, rising global temperatures and the possibilty of more frequent El Niños may prevent the reefs from ever recovering.

The true-color image above was acquired by the Enhanced Thematic Mapper plus aboard NASA’s Landsat 7 satellite in 1999. 82 percent of the Porites coral on the reef offshore of Motu Tetaa (see arrow on image) died in 1998.

For more information about the study of Rangiroa Atoll’s coral reefs, read the press release from the University of Newcastle upon Tyne.

Want to learn how scientists are Mapping the Decline of Coral Reefs? Also, click to read about the Amazing Atolls of the Maldives.