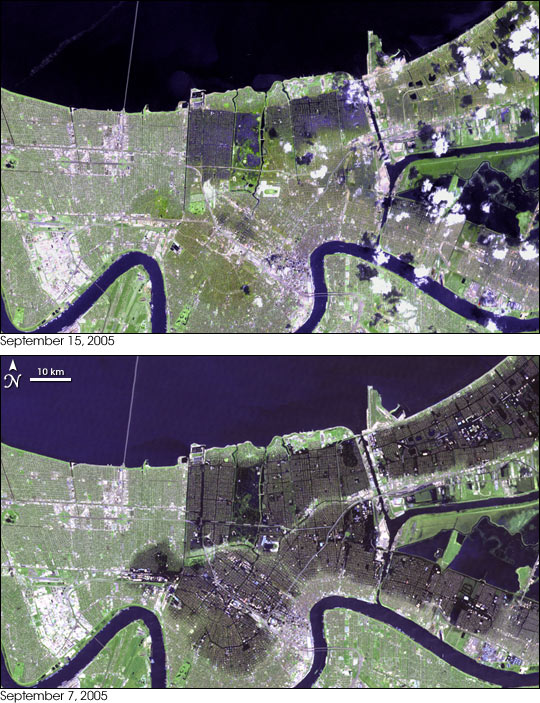 The floods that buried up to 80 percent of New Orleans had noticeably subsided by September 15, 2005, when the top image was taken by the Landsat 7 satellite. In the two and a half weeks that had passed since Hurricane Katrina flooded the city, pumps had been working nonstop to return the water to Lake Pontchartrain. As portable pumps were brought in to supplement the permanent pumps already hard at work, as much as 380 cubic meters (380,975 liters or 11,300 cubic inches) of water were being pumped out of New Orleans every second, according to the U.S. Army Corps of Engineers.

The progress in draining the city is evident when the September 15 image is compared with an image taken one week earlier. In the lower image, taken by the Landsat 5 satellite on September 7, black flood water covers much of the city. By September 15, the dark flood water had all but disappeared, lingering only in a few sections of the city. The September 7 image does not show the full extent of the flooding. Taken more than a week after the hurricane struck New Orleans, the image shows a flooded city that had already started to drain. In a similar (but cloudy) image taken on August 30, the flood water in St. Bernard Parish, image right, extends almost to the Mississippi River.