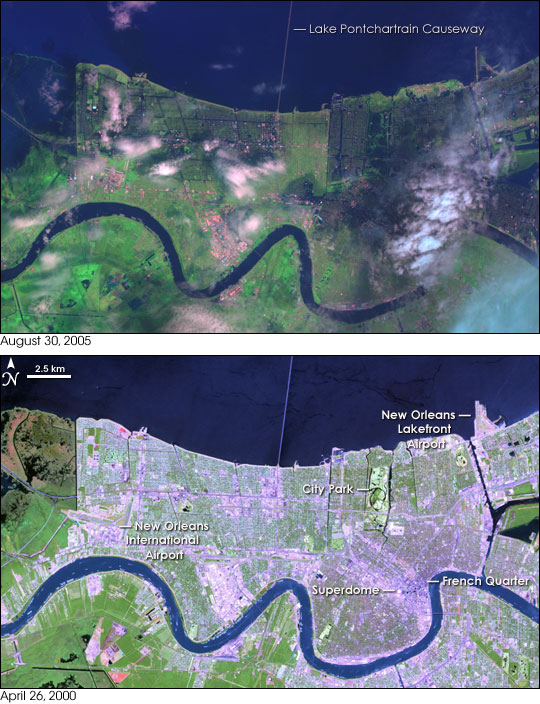 Although the Mississippi River undulates across the bottom of these images virtually unchanged, big changes are visible within the city of New Orleans on August 30, 2005 (top image), compared to April 26, 2000 (bottom.). In 2000, the urban landscape appears in lavender (developed areas) and pale green (springtime vegetation). The city neatly separates the blue ribbon of the Mississippi from Lake Pontchartrain to the north, although several narrow canals are visible as straight blue lines, such as the ones surrounding City Park. In the wake of Katrina, standing water creates a blue, bruised appearance to large sections of the city, especially the eastern part.

New Orleans sits in a low-lying area between Lake Pontchartrain to the north and the Mississippi River to the south. When storm surge and heavy rainfall from Hurricane Katrina weakened some levees—hills of earth that line the lake shores, the river, and canal banks—gravity took its course. Water was still flowing from Pontchartrain into New Orleans as of August 31, and many houses were swamped up to their rooftops. Among the locations being slowly inundated are the Superdome, where tens of thousands of refugees are staying, and the French Quarter, which was thought to be one of least flood-prone areas of the city. As the waters build, the risk of people coming into contact with chemical- or sewage-contaminated water increases rapidly.