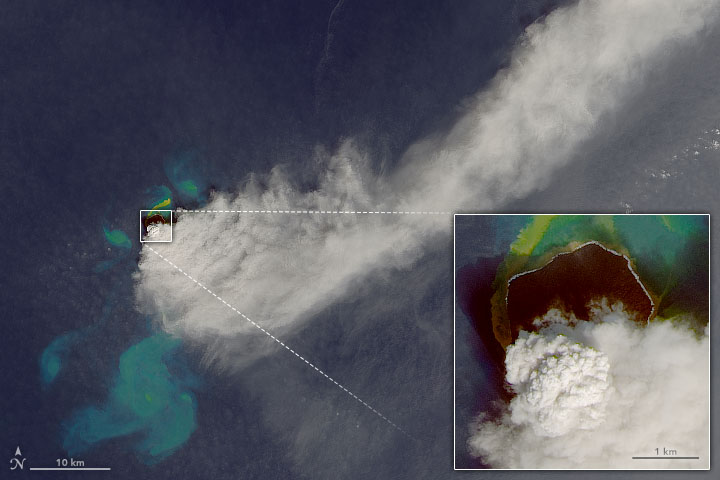 In November 2013, volcanic activity roughly 1,000 kilometers (620 miles) south of Tokyo gave rise to a tiny island in the Pacific Ocean. Since then, the young island—Nishinoshima—has alternated between periods of explosive activity and calm.

The Operational Land Imager-2 on Landsat 9 captured this natural-color image of the island on October 6, 2022, during a bout of explosive activity. The water around the island is discolored by volcanic minerals and gases and perhaps by seafloor sediment stirred up by the eruption. Ash reached a height of 3.5 kilometers (2.2 miles) between October 5-11, according to the Global Volcanism Program.

Small, bright plumes of steam routinely emanate from Nishionoshima and are often visible in satellite imagery. But a larger and darker plume became visible on October 1, 2022, a sign that the volcano had likely started to erupt ash. Satellite images show ash plumes drifting with the winds and darkening skies over the Pacific on several days, with the intensity of activity starting to wane by October 14, 2022. Imagery collected by the Moderate Resolution Imaging Spectroradiometer (MODIS) shows a smaller, lighter plume on October 15-17, a sign that Nishinoshima was likely emitting less ash.

During a previous eruption in August 2020, researchers used the Advanced Spaceborne Thermal Emission and Reflection Radiometer (ASTER) on NASA’s Terra satellite to observe the composition and particle size of Nishinoshima’s plume. In that case, they found that the ash had a primarily andesitic composition, meaning it had a moderate amount of silica compared to other types of volcanic ash. Andesite magmas typically erupt at temperatures between 900 and 1,100 degrees Celsius (1,650 and 2,010 degrees Fahrenheit), can generate explosive eruptions, and often form when an oceanic plate is getting pushed below the edge of another plate.