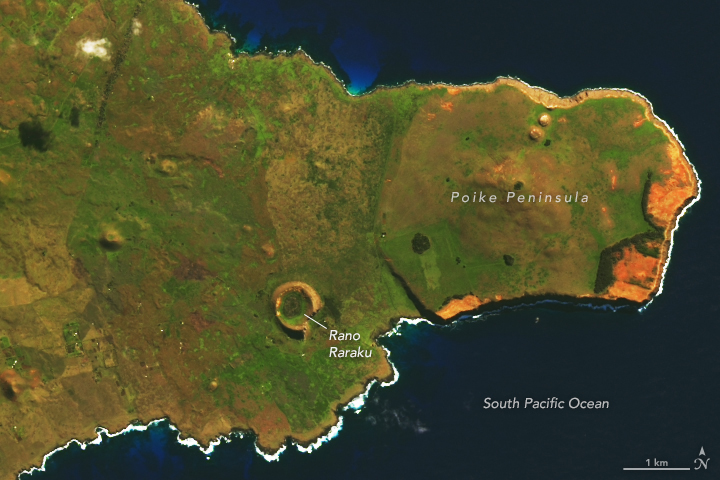 On October 5, 2022, a fire broke out on Easter Island, a remote island in the southeastern Pacific Ocean. As the blaze spread across nearly 100 hectares of rolling grassy hills, it singed dozens of the Chilean island’s iconic stone statues, or moai—monolithic human figures with large heads carved from volcanic rock. There are roughly 1,000 moai on the island, which archaeologists say were carved from roughly the 10th to the 16th century.

The blaze affected landscapes near Rano Raraku, an extinct volcanic crater on the eastern side of the island. The Operational Land Imager-2 (OLI-2) on Landsat 9 captured this natural-color image (right) of the burned area on October 12, 2022.

In this image, charred areas appear brown. Unburned areas—mostly grass and ferns—are green. The red soils on the easternmost part of the island are deeply eroded areas where colorful volcanic soils of the Poike Peninsula are exposed. The other image (left) shows the same area on June 14, 2022, nearly four months before the fire. 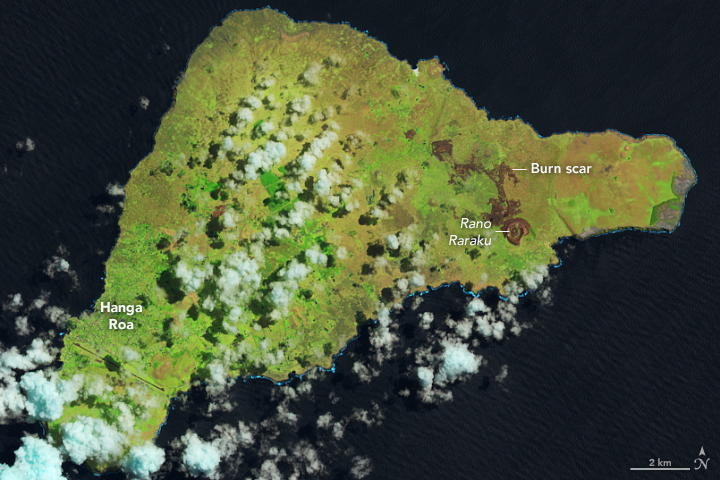 A false-color version of the image (above) shows the burn scar using OLI-2’s observations of shortwave infrared, near infrared, and red light (bands 6-5-4), which makes it easier to distinguish between burned and unburned vegetation.

The ancient Polynesians who once inhabited the island, the Rapa Nui, used Rano Raraku as a quarry from which they harvested lapilli tuff—a volcanic rock made of consolidated ash. Almost all of the moai are carved from tuff from the Rano Raraku quarry. (The red topknot “hats,” or pukao, found on some of the statues came from a different quarry on the western side of the island.)

Preliminary estimates indicate that as many as 80 of the moai were damaged by the fire. There are 265 moai outside of the crater and 121 inside of it, according to Chile’s Undersecretary of Cultural Heritage of the Ministry of Cultures, Arts and Heritage.