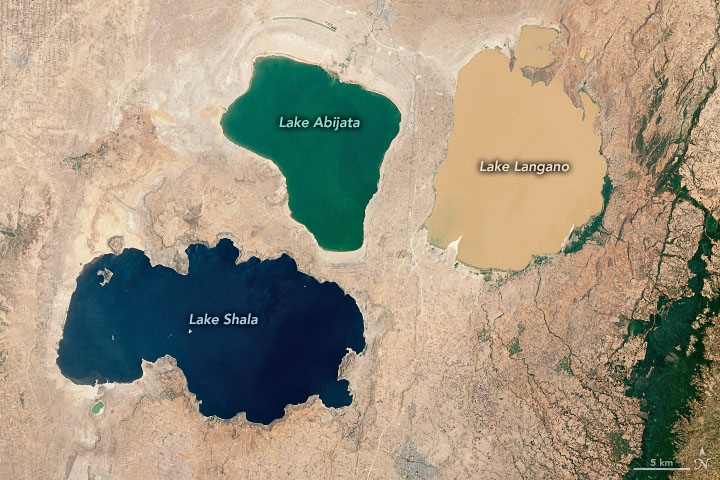 A Trio of Ethiopian Lakes

Tens of thousands of years ago, an inland sea connected the three Ethiopian lakes visible in this image. That large body of water—Lake Galla—began to contract about 10,000 years ago, a victim of changing rainfall patterns and tectonic motion that pushed the landscape upward and diverted key rivers that supplied it with water.

About 2,000 years ago, Lake Galla had declined so much that it became three separate bodies of water: Lake Shala, Lake Abijata, and Lake Langano. On March 29, 2022, the Operational Land Imager (OLI) on Landsat 8 captured this natural-color image of the lakes. Despite their shared origin, the lakes have evolved separately and now have different appearances and water chemistries.

Lake Shala, the largest and deepest of the three, fills an expansive volcanic caldera that collapsed 3.5 million years ago. With several hot springs and fumaroles near it, the lake’s waters are known for being unusually warm, saline, and rich in phosphate. It is classified as a soda lake because the water is strongly alkaline, meaning it has a high pH. Like many other soda lakes, Shala is biologically productive despite the extreme water conditions. It supports an array of life ranging from an abundance of microorganisms to small crustaceans to vast flocks of flamingoes.

Lake Langano, a freshwater lake fed mostly by streams to the east, stands out for its brown water. The incoming water is often rich with red-brown sediment from nearby mountains. It has become a popular destination for beachgoers, partly because its waters are free of parasitic worms that can cause schistosomiasis, a sometimes-fatal disease spread by freshwater snails.

Lake Abijata is the shallowest and most variable of the three, with a maximum depth of 14 meters (46 feet). The green color of the water is likely due to the presence of phytoplankton. Satellite observations from the Landsat program show the lake has shrunk significantly in recent decades, with some research indicating it has lost more than one-third of its area since the 1970s. Increased water usage by a soda ash factory on the lake, and increased evaporation due to land use and land cover changes around the lake are potential causes for the changes, according to the researchers.