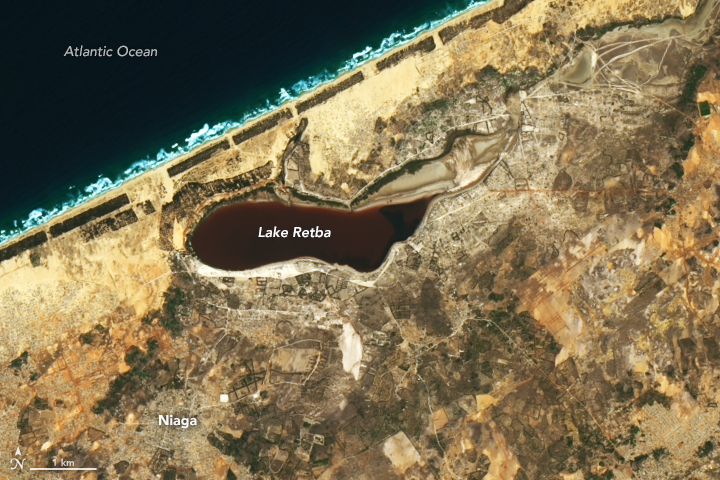 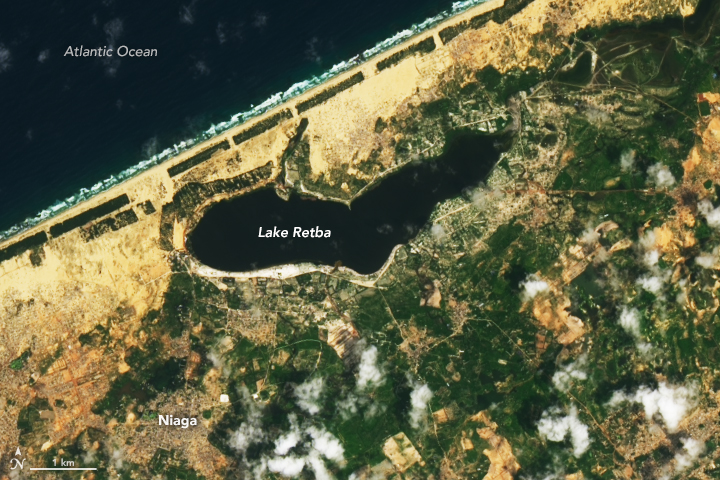 Today’s story is the answer to the September 2022 puzzler.

Along the coast of Senegal in West Africa, just a kilometer of beach separates the bright pink waters of Lake Retba from the dark blue-green waters of the Atlantic Ocean. But conditions at the lake (also called Lac Rose) are not always so rosy.

Located about 40 kilometers (25 miles) northeast of Dakar, Lake Retba attracts visitors who want to see its unique color and float in its salty, buoyant waters. With a concentration of salt that surpasses the Dead Sea, Lake Retba is also important to the local economy. Harvesters collect thousands of tons of salt from its waters each year, which is used locally for cooking and preserving food and is also exported to nearby countries.

The water’s pink hue comes from Dunaliella salina—a single-celled algae that can tolerate salty environments. D. salina are a type of green algae, but under stressful conditions, such as high salinity or intense sunlight, they produce protective carotenoids, including orange-red beta carotene.

The lake is typically at its pinkest during the dry season (November to June) when there is persistent sunlight and high concentrations of salt. The left image, acquired by the Operational Land Imager (OLI) on Landsat 8, shows the lake on May 19, 2022, when waters appeared rosy.

The pink color fades during the region’s wet season (July to October) when more clouds mean less sunlight and the waters become fresher due to rainwater. The second image (right), acquired with the Operational Land Imager-2 (OLI-2) on Landsat 9, shows the lake on September 16, 2022, when its color nearly matched the Atlantic Ocean.

The wet season in 2022 was especially wet. Bouts of torrential rain in early August and early September led to deadly flooding in Dakar and surrounding areas. The extreme rainfall impacted more than the lake’s color; for example, floodwaters in September breached the lake’s bank and washed away salt mounds that harvesters had collected there.

Lake Retba is the only pink lake in Africa, but the phenomenon occurs elsewhere around the planet. For example, Torrevieja Lagoon in Spain and Lonar Lake in India both take on rosy hues from the same single-celled algae.