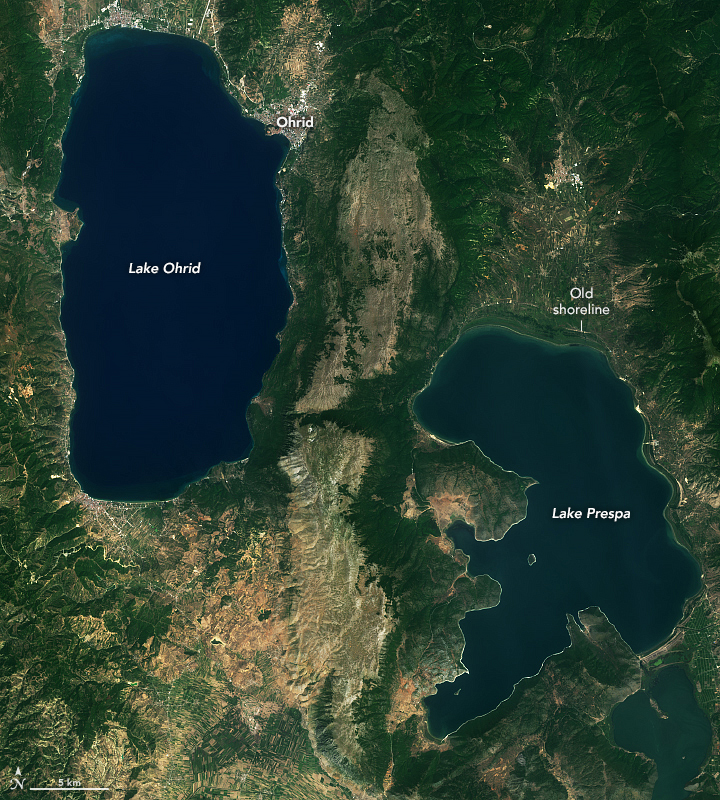 A Pair of Ancient Lakes

Lake Ohrid and Lake Prespa, two of Europe’s oldest lakes, lie in a mountainous area along the borders of North Macedonia, Albania, and Greece. The lakes have persisted for at least 1 million years and possibly longer.

The lakes owe their longevity to sustained tectonic activity that causes the land beneath them to sink, creating grabens, or low-lying valleys flanked by faults. This ongoing sinking of the valleys prevents sediment and plant life from building up and turning the lakes into bogs over time, as happens to most lakes after a few thousand years.

Most of the world’s millions of lakes are less than 18,000 years old and were formed when glaciers melted at the end of the last Ice Age. Geologists classify just 30 lakes, including Ohrid and Prespa, as “ancient”—defined by some researchers as persisting more than one ice age cycle (at least 130,000 years). Geologists think about 20 lakes on Earth, mostly found in grabens, have persisted for more than 1 million years.

Most of Ohrid’s water comes from underwater springs, but about 20 percent of it drains down from the higher-elevation Prespa through underground karst channels. While water levels have remained relatively stable on Lake Ohrid in recent decades, Prespa has experienced significant declines in both area and volume. In one recent study, based on nearly four decades of Landsat observations, scientists reported that Lake Prespa lost 7 percent of its surface area and half of its volume between 1984 and 2020, likely because of increased water withdrawals for agriculture.

The low-nutrient, high-oxygen waters of Lake Ohrid support more than 1,200 species of plants and animals, giving the lake one of the highest concentrations of biodiversity in the world. The longevity of Lake Ohrid has allowed for the evolution of 200 species that are found nowhere else, including unusual snails, ducks, and trout. The lake is a UNESCO world heritage site, and it is sometimes called the European Galapagos or a museum of living fossils due to its remarkable biodiversity.

The lakes aren’t the only local features notable for their ages. Ohrid, the largest town on the lake, is one of the oldest human settlements in Europe. It has the oldest Slav monastery and more than 800 Byzantine-style icons created between the 11th and 14th century.

In 2010, International Astronomical Union scientists gave the name Ohrid to a lake on Titan, a moon that revolves around Saturn.