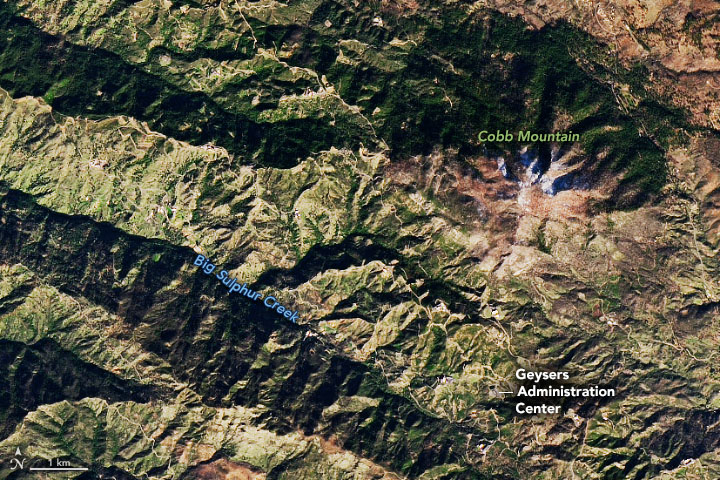 The Geysers of California

About 1.3 million years ago, a large blob of silica-rich magma forced its way through Earth’s crust beneath the Coast Range of northern California. Today that shallow rock body is still piping hot, and the 45-square-mile area above it is known as The Geysers—the world’s largest energy producing geothermal field.

Although the nearby Clear Lake volcanic field was still erupting as recently as a few thousand years ago, there were never any geysers at this geothermal field. The Geysers is a misnomer that came from 19th century settlers to the area who misunderstood the hot springs and fumaroles bubbling and steaming away in the canyon of Big Sulphur Creek. From the mid-19th to the mid-20th century, a popular resort hotel operated in the area, while indigenous people of the region have visited the springs since prehistoric times.

Situated about 8 miles (13 kilometers) northeast of Geyserville, the site is now home to 18 power plants that use steam to drive turbines to generate electricity. The white roofs of several of the power plants appear in this natural-color image, acquired by the Operational Land Imager (OLI) on Landsat 8 on January 10, 2022.

The steam-driven turbines in this area can generate 725 megawatts of electricity, enough to power a city the size of San Francisco. The Geysers typically supplies the power needs of Sonoma, Lake, and Mendocino counties, as well as a portion of Marin and Napa counties. As of 2018, turbines in the Geysers area produced 50 percent of California’s geothermal power.

Geothermal energy is produced by capturing heat from within the Earth, either via natural steam or very hot water. It is a reliable and renewable source of energy that can be available whether or not the Sun is shining or the wind is blowing.

Three elements are needed to produce geothermal energy: magma close to the surface, fractured or permeable rock, and fluids that can circulate through the heated rock. At The Geysers, the body of rock that intruded over a million years ago lies just 0.6 miles (1 kilometer) below the surface. Deeper parts, below 1.5 miles (2.5 kilometers), can reach temperatures of 750°F (400°C).

While most geothermal power plants tap into water reservoirs, the Geysers system is one of only two vapor-dominated systems in the world, according to the U.S. Geological Survey. This means the formation produces steam directly, which can more efficiently be tapped to produce electricity.

A small steam-engine generator was first used to produce electricity here in the 1920s, and the first modern geothermal well was drilled in 1955. Over several decades, further drilling and development by various operators brought The Geysers to its peak-production in 1987, when 21 power plants had a capacity of more than 2,000 megawatts. Then power production began to decline as the steam reservoir began to tap out.

In the mid-1990s, to sustain energy production and extend the life of the field, plant operators turned to a practice called enhanced geothermal systems (EGS). Water is injected at high pressure to reopen the natural fractures in the rock and allow hot water or steam to flow into wells. Today, two pipelines deliver treated wastewater from Lake County and the city of Santa Rosa to recharge the reservoir.