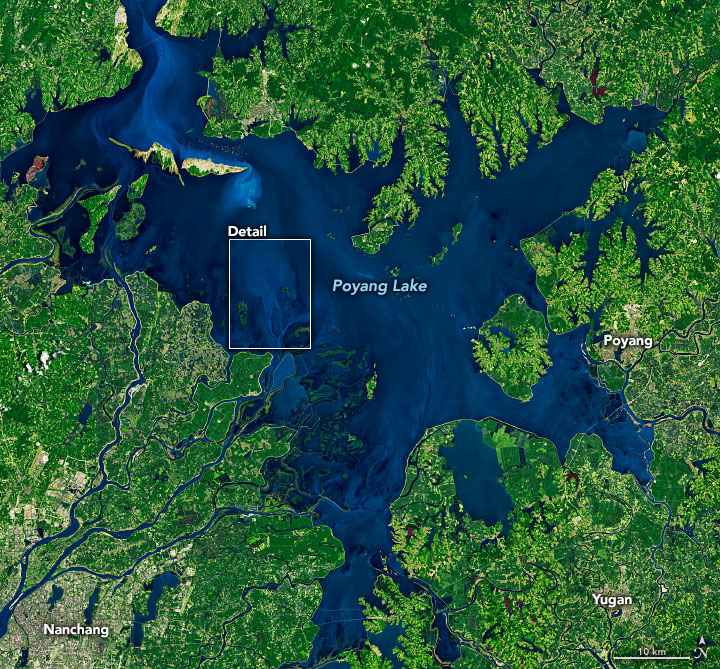 Poyang Lake, in China’s Jiangxi Province, routinely fluctuates in size between the winter and summer seasons. In winter, water levels on the lake in are typically low. Then, summer rains cause the country’s largest freshwater lake to swell as water flows in from the Yangtze River.

The lake has not swelled in the summer of 2022. A prolonged heat wave and drought across much of the Yangtze River Basin dried the lake out early and pushed water levels to lows not seen in decades.

The Operational Land Imager (OLI) on Landsat 8 acquired these pairs of images on July 10, 2022 (left images), and August 27, 2022 (right images). The images are composites, and combine OLI observations of shortwave infrared, near infrared, and visible light. 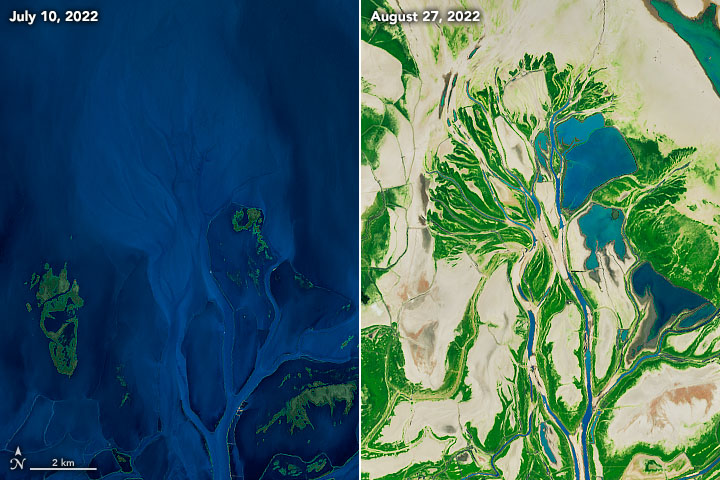 The highest water levels of the year on Poyang Lake occurred on June 23 (as measured at the Xingzi Station). After that, high temperatures and a lack of rain caused the lake to drop rapidly, according to the Jiangxi Hydrological Monitoring Center. By August 6, water levels had declined to 11.99 meters (39.33 feet), marking what the center called the start of the lake’s “dry season.” That low came roughly 100 days earlier than usual. It was the earliest date that the water dropped to such a low mark since records were first kept in 1951. Water levels have continued to drop, registering 8.96 meters (29.4 feet) on August 30.

The emptying of Poyang Lake has disrupted irrigation, shipping, and drinking water systems for nearby communities. In addition, millions of people living throughout the Yangtze River watershed are being affected as extreme heat and drought put pressure on China’s water supplies, electricity generation, farming, and industrial activity.