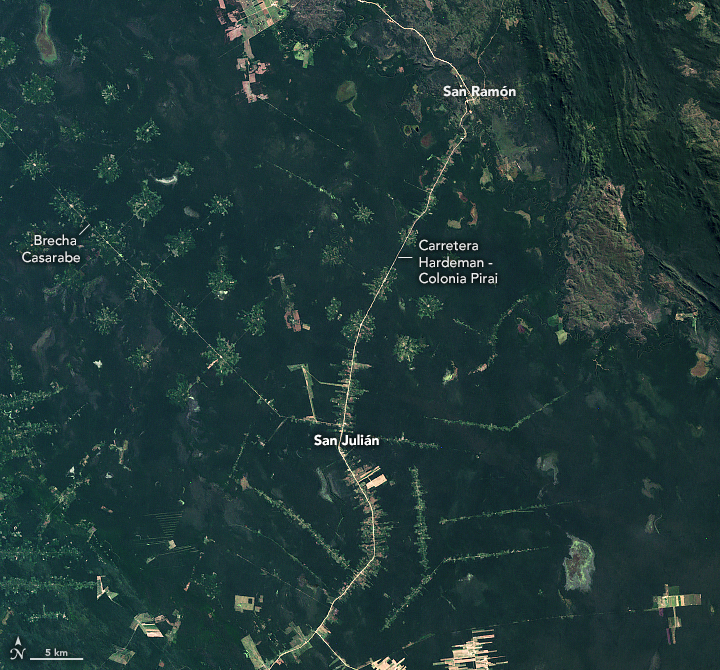 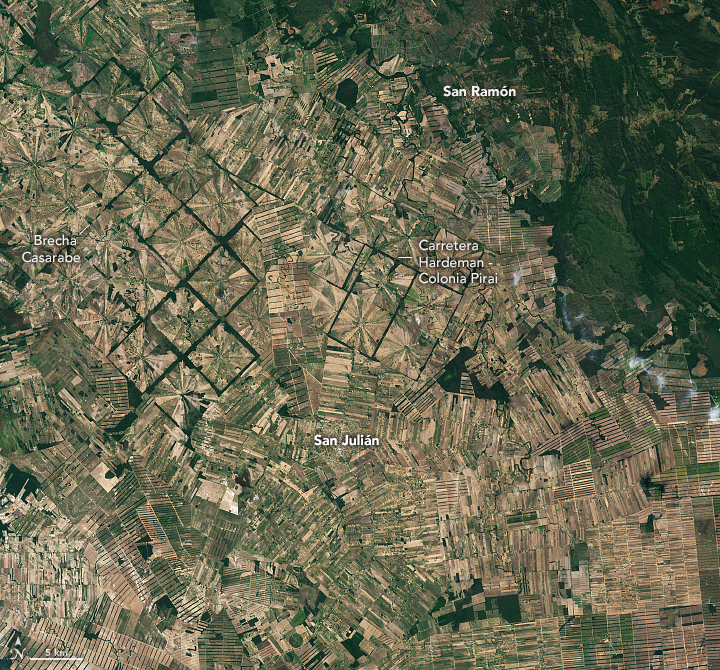 Patterns of Forest Change in Bolivia

The Tierras Bajas region in Bolivia is home to some of the most distinctive land-use patterns in the world. Since the late 1970s, a series of pinwheel-shaped and rectangular deforestation zones have remade the Chiquitano dry forest landscapes east of Santa Cruz de la Sierra.

Landsat satellites captured these natural-color images of the area in 1986 and 2022. Radial deforestation patterns first appeared when the U.S. and Bolivian governments worked to resettle impoverished migrants from the Andean highlands (Altiplano) to this lowland area, according to a historical analysis of land cover change published by NASA researchers. Early settlements in the 1970s and early 1980s typically consisted of a handful of buildings, a church, bar, soccer pitch, and a few fields and pastures where people engaged in small-scale subsistence farming.

Political instability halted most formal settlement programs in the 1980s, but different waves of settlement and economic activity continued. Migrants continued to arrive from the Altiplano where they congregated in unofficial settlements southeast of the government-sponsored settlements. Mennonite settlers from Mexico, who had started to migrate to this area in the 1960 and 1970s, continued to arrive throughout the 1980s and 1990s in large numbers. They established new colonies in isolated areas that typically had rectangular nodes of deforestation emanating from specific village centers and roads.

As the years passed, foreign and domestic investors moved in and set up large-scale farming operations that cleared broad areas for commodity crops, especially soybeans. Rather than expanding radially from a central point, these newer operations began with the construction of roads running deep into forested areas. Development spread outward in stepwise fashion, leaving rectangular deforestation patterns. (See the locations of large-scale farms, Mennonite communities, and unofficial Altiplano migrant communities here. Some are to the southeast of the images shown above but visible in this wider version of the 2022 image.)

Data published by the World Resources Institute indicate that the amount of primary forest loss in Bolivia each year has been rising in recent decades and has roughly doubled from the early 2000s to the early 2020s. Bolivia’s 6.7 million hectares of forest loss between 2001 and 2021 put it on the institute’s top 10 list for tree cover loss.