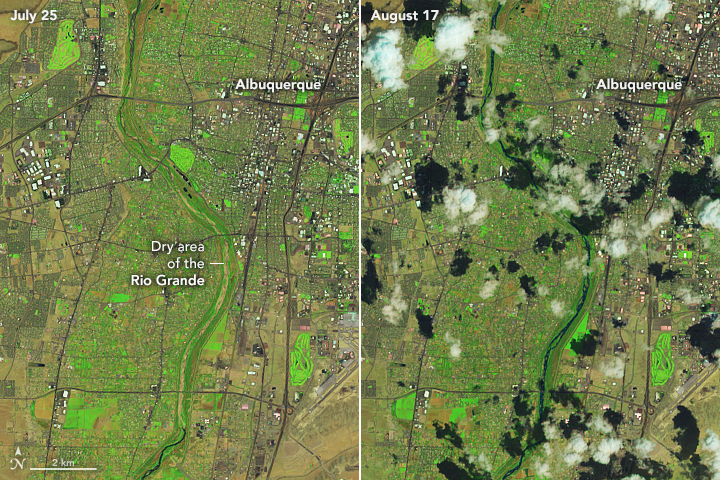 In the last week of July 2022, a 5-mile stretch of the Rio Grande in Albuquerque, New Mexico, ran dry for the first time in 40 years. Farther downstream, 12 miles of the river near Los Lunas and 32 miles in Socorro County had also dried up.

These images, acquired on July 25 and August 17, 2022, by the Operational Land Imager-2 (OLI-2) on Landsat 9, show the Albuquerque reach of the Rio Grande during and after the drying event. The images use false color to make it easier to distinguish the water.

Such drying events are not uncommon on the Rio Grande; in fact, hundreds of miles of the lower river are now often dry. But the drying events now also happen earlier and farther north.

“The Rio Grande has dry reaches every summer, but the dry reaches are typically downstream of Albuquerque,” said Grady Ball, a hydrologist with the U.S. Geological Survey in New Mexico. Despite the dry main channel, however, water is often still present in the system of irrigation ditches and channels that tap the river.

“The Rio Grande is a highly managed river system,” Ball said. “Drought years place strain on water operations and can make managing a complex system difficult.” The dry reaches south of Albuquerque each summer are usually due to high demand, he added.

The Rio Grande stretches for 1,900 miles (3,000 kilometers) from its headwaters in the San Juan Mountains of Colorado to its mouth in the Gulf of Mexico. A 1,250-mile stretch of the river forms the border between the United States and Mexico.

With the Southwest in the grip of the worst megadrought in 1,200 years, more than 40 percent of the Rio Grande watershed experienced exceptional drought in early summer 2022. Recent heat waves and continued water demands are taxing the country’s fifth-longest river, which provides water for 6 million people and irrigates 2 million acres of land.

A few days after the drying event, rains brought a pulse of water to the Albuquerque reach on July 26. By August 3, the Rio Grande was flowing at 1,000 cubic feet (28 cubic meters) per second at Albuquerque, according to provisional water data from the U.S. Geological Survey.

Boom and bust water cycles and ephemeral rivers are familiar features of the desert Southwest. But the last time the Albuquerque reach dried (1983), the reservoirs along its length stood much higher. Today, with drought, weak snowpack, a lack of rain, and continued high water demand, the river’s reservoirs are facing historic lows. At the end of July, New Mexico’s largest reservoir, Elephant Butte, stood at 4 percent of capacity, its lowest level since the 1970s.

In the third week of August, a sub-tropical low from the Gulf of Mexico brought intense storms, heavy rainfall, and flash flooding to the region. But the rains cannot fully alleviate the continuing drought conditions across the Southwest, which are due to long-term accumulated precipitation deficits, according to the University of Arizona’s Climate Assessment for the Southwest (CLIMAS). “Sustained monsoon activity helped reduce the most extreme drought characterizations, but is not enough to reverse long-term drought conditions,” CLIMAS reported in August.

“The Rio Grande through New Mexico is a snow-melt driven system,” Ball said. “As temperatures increase and winter precipitation becomes less reliable, drought is likely to become an endemic state in the Rio Grande Basin. As in much of the Western U.S., water resources will have to be reexamined as water supply struggles to match demand.”

Nearly 75 percent of the river’s water is used for agriculture. But other factors must be considered as well, Ball said. “Managing the system has to incorporate not only water users but also environmental concerns. For example, the silvery minnow is an endangered species that is native to the Rio Grande and it has to be considered in all operations.”

During the drying of the Albuquerque reach, when miles of habitat for the Rio Grande silvery minnow shrank to puddles, U.S. Fish & Wildlife Service crews dragged nets through the remaining pools to rescue and relocate the endangered species.