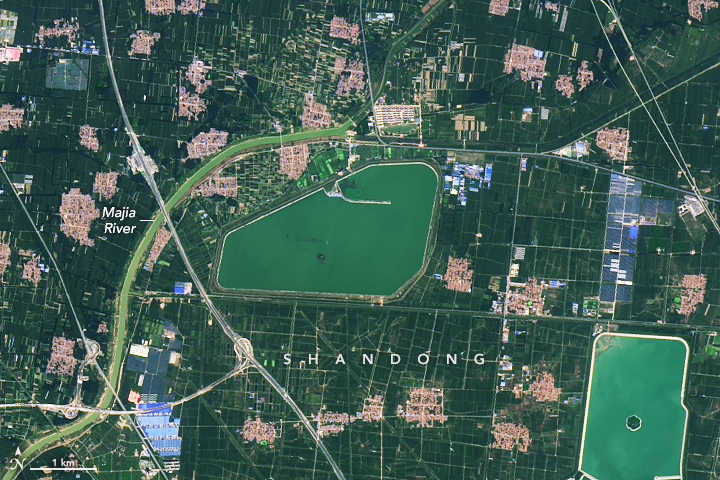 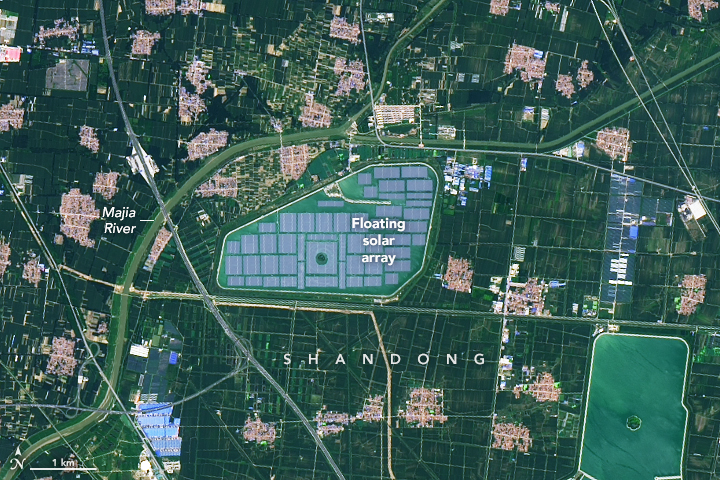 By some estimates, countries might need to devote between 0.5 and 5 percent of their land area to solar panels in order to fully decarbonize their economies by 2050. Where space is at a premium, that could create tension with farmers, conservationists, and other groups over land usage.

Floating solar panels have been proposed as one solution to this problem. While still uncommon in the United States, floating photovoltaic systems, also called floatovoltaics, are growing in popularity worldwide, particularly in Asia.

On August 17, 2022, the Operational Land Imager-2 (OLI-2) on Landsat 9 captured this natural-color image of a new floating solar system on a reservoir near Dezhou in China’s Shandong province. Part of a citywide push to decarbonize the city’s economy, the 320-megawatt project was among the largest floatovoltaic projects in the world in 2022.

Floating solar offers a number of benefits, according to one team of researchers at the U.S. National Renewable Energy Laboratory (NREL). Floating solar panels stay cooler and run more efficiently in water. They help prevent the evaporation of water. And they may help minimize unwanted algae blooms by shading the water. Many reservoirs are also located near cities, making it easier to feed power into the urban grid than supplying it from remote solar farms in deserts.

On the other hand, solar power experts note that floating solar systems need to be built to withstand water and waves. They are typically more expensive than land-based solar and could require extra cleaning due to the buildup of biofilms due to microbial activity. And they will likely have impacts on marine plants, fish, and other wildlife.

A team of renewable energy researchers, writing in the journal Nature, noted that the installed capacity of floating solar is about 3 gigawatts, compared to more than 700 gigawatts for land-based systems. But reservoirs around the world—which collectively cover an area the size of France—offer considerable room for expansion. Covering 10 percent of the world’s hydropower reservoirs with floating solar panels could produce 4,000 gigawatts of power-generating capacity, equivalent to the electricity-generation capacity of all the fossil-fuel plants in operation worldwide, the researchers wrote. Putting floating solar on about one quarter of the 24,000 reservoirs in the United States would produce about 10 percent of the electricity the U.S now generates, the NREL research team calculated.