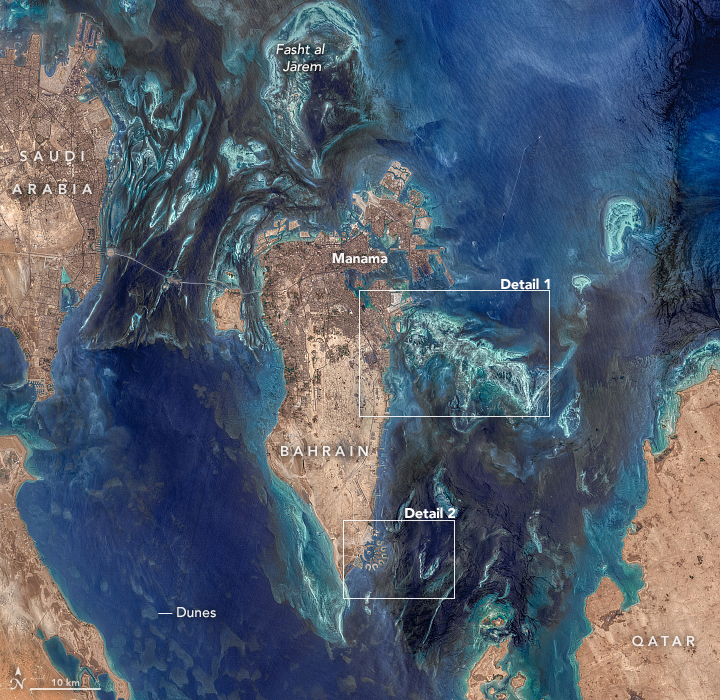 Making Pearls in the Persian Gulf

Bahrain, a small archipelago in the Persian Gulf, has grown substantially in recent decades. As developers reclaimed land from the sea, the shape of the island nation’s coastline has changed. So, too, has the underwater habitat around it.

The region’s unique land and water features are visible in these satellite images, acquired on July 24, 2022, by the Operational Land Imager-2 (OLI-2) on Landsat 9.

Norman Kuring, a retired researcher from NASA’s ocean biology group, processed the images and used color-filtering techniques to draw out details in the water. He still browses satellite images for anything that catches his eye. “I wasn’t looking for Persian Gulf imagery specifically in this case,” Kuring said. “The region just looked clear that day, and the shallow bottom offered interesting possibilities.”

The Persian Gulf averages just 35 meters (115 feet) deep. The water is even shallower close to Bahrain’s shores and reefs—just a few meters deep in places. Sunlight penetrates the shallow water and reflects off submerged surfaces.

Toward the bottom-left of the image, smooth, dark shapes dot the seafloor. Eman Ghoneim, a physical geographer at the University of North Carolina Wilmington, thinks these are old sand dunes. Thousands of years ago, when sea levels were lower, the dunes were sculpted by wind into crescent shapes. Then rising seas submerged them.

Perhaps most obvious submerged features in the images are the large reefs surrounding Bahrain, visible as the light-green areas offshore. Historically, these structures known as “fasht” were coral or pearl oyster reefs. Today, most of them are dead coral skeletons, although some rocky surfaces still have living corals attached to them, according to Ghoneim, who has studied this underwater habitat with satellites and field surveys.

John Burt, a marine biologist at New York University Abu Dhabi, also has studied the decline of Bahrain’s coral reefs. “There is little remaining live coral,” Burt said. He noted that the decline was caused by sediments stirred up by coastal development and by historic bleaching events. Coral bleaching, in which corals expel the algae in their tissues and turn white, occurs when water temperatures are higher than usual. Bleaching does not always kill the coral, but in 1996 it led to a mass die-off, “from which there has been negligible recovery,” Burt said. 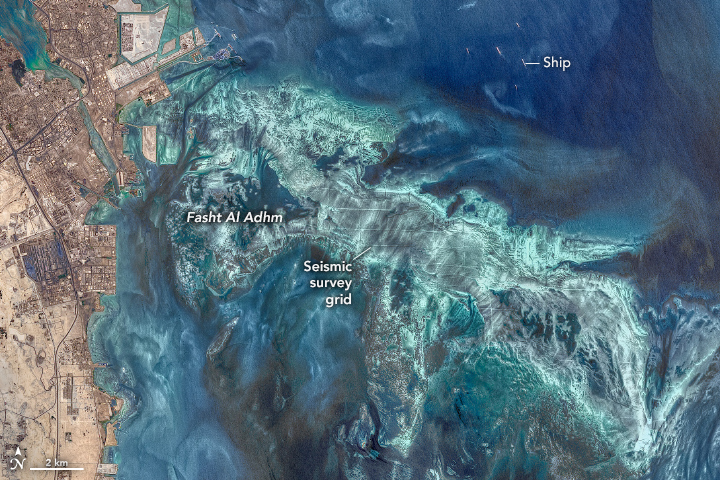 Fasht Al Adhm, the area’s largest reef, spans about 200 square kilometers (80 square miles) off the eastern coast of Bahrain. The detailed image above shows the reef (light-green) amid deeper channels and open water (dark blue). Notice the gridded pattern of lines across the reef surface. According to Burt, these lines are the transects along which explosive charges were detonated for seismic surveys during oil exploration in the 1980s. 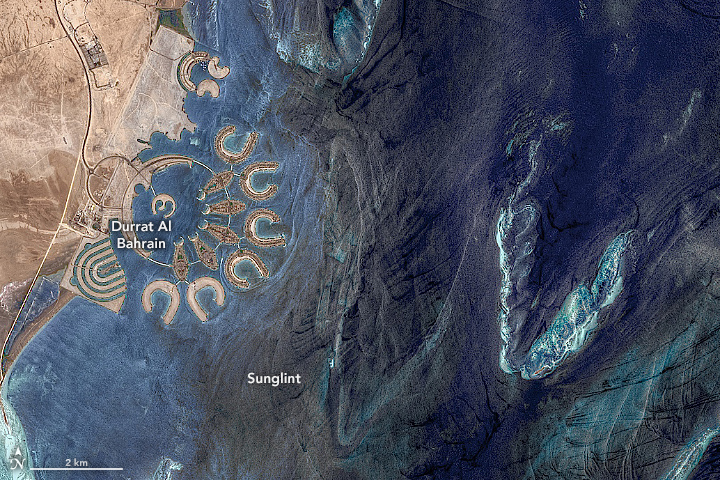 The second detailed image highlights an area where sunlight reflected off the water surface at the same angle that the satellite sensor viewed it, causing a gleam known as sunglint. Although sunglint can wash out many features, some phenomena—such as wakes and wind-roughened surface waters—become more visible.

The left side of the image shows Durrat Al Bahrain. Dredging began in 2004, and by 2007 it added about 5 square kilometers (2 square miles) of artificial islands to the southeast coast of Bahrain. “Durrat Al Bahrain was created to resemble oysters, fish, and of course the pearl so central to the nation’s history,” Burt said.

It is easier to build artificial islands here because the water is shallow. But such projects can take a toll on offshore ecosystems. The construction of the islands involved massive dredging operations to remove sand from the seafloor, Ghoneim said, “which has profound impacts on many benthic habitats.”