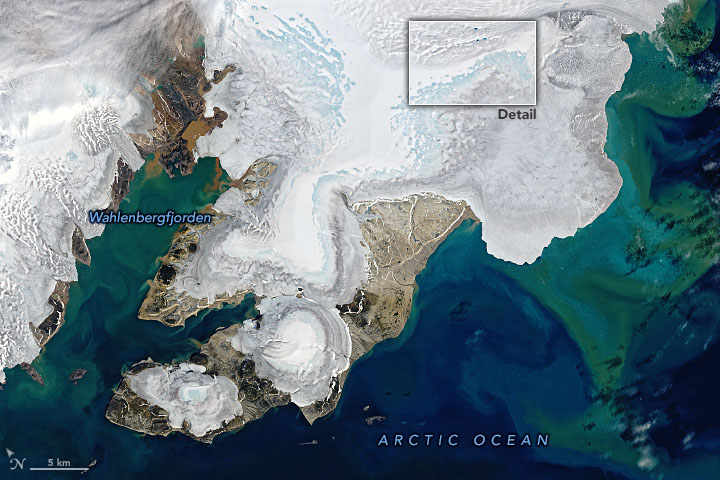 This Image of the Day is the answer to the August 2022 puzzler.

Exceptionally warm air temperatures in summer 2022 have caused record melting across Svalbard. The abundant meltwater, much of which flowed to the ocean, is the latest expression of a rapidly warming climate in Norway’s ice-covered archipelago.

According to Xavier Fettweis, a climatologist at the University of Liège, the cumulative melting across Svalbard between June 1 and July 31, 2022, was 1.5 times larger than the previous record in 2018. Since the start of summer, he noted, about 40 gigatons (44 billion U.S. tons) of meltwater has poured into the ocean.

“The melt anomaly is 3.5 times larger than the 1981–2010 average, and 5 times the interannual variability,” Fettweis said. “Only a changing climate can explain this.”

Located halfway between Norway’s mainland and the North Pole, Svalbard is one of the fastest warming places on the planet. More than half of its land area is covered with ice, representing about 6 percent of planet’s glaciated area outside of Greenland and Antarctica.

Even before the record melting, warming was already changing the landscape. Glaciers have been retreating, and a surface layer of compressed porous snow, known as “firn,” has been losing its capacity to store much meltwater.

The excessive warmth in summer 2022 has taken a visible toll. These natural-color images, acquired on July 29, 2022, by the Operational Land Imager-2 (OLI-2) on Landsat 9, show a portion of Nordaustlandet—a major island in northeast Svalbard. Notice the extensive light-blue areas where snow and firn have melted away and exposed bare ice. The detailed image (below) shows several dark-blue melt ponds, where meltwater has pooled on the surface of the ice cap.

Offshore, some of the colorful water is likely due to sediments that were eroded by the flow of ice over bedrock, and then carried by meltwater into the waters of Wahlenbergfjorden and the adjacent Arctic Ocean. There might also be phytoplankton present, which can color the water turquoise-blue and green. 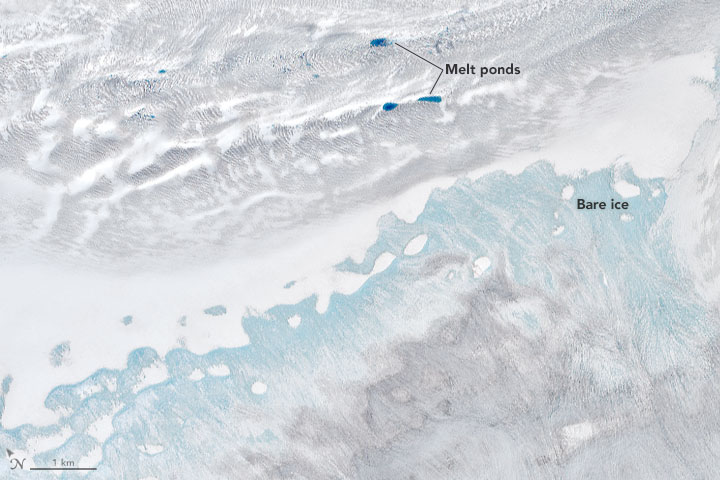 The melting this summer was caused by persistent warm winds blowing from the south. From May 1 through July 25, 2022, parts of the archipelago saw air temperatures that averaged up to 1.8°C (3.2°F) higher than usual. A significant pulse of warm air starting on July 15 produced Svalbard’s highest recorded melt volume on July 17.

In the past, much of the meltwater would have been stored within the layer of firn, where the water eventually refreezes. The process helps prevent meltwater from flowing into the ocean and can help preserve glacial ice. According to Fettweis, between 1981–2010, Svalbard’s snowpack retained about 34 percent of the summer meltwater. This summer, he said, only 8 percent was retained.

Over the past decade, mass losses from melting and runoff have outpaced accumulations from rain and snow. “Svalbard is now losing more ice than it is gaining,” Fettweis said, “and it is clear that this trend will continue in the future.”