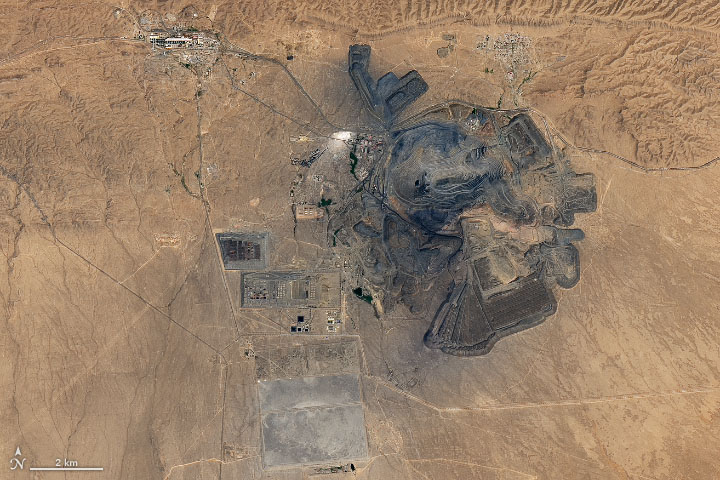 In satellite images of central Uzbekistan, a large circular cavity stands out amidst fields of sand and dusty plains. It is Muruntau gold mine, one of the world’s largest sources of gold.

On July 22, 2022, the Operational Land Imager (OLI) on Landsat 8 acquired this natural-color image of the mine. Hundreds of trucks and a conveyer system are used to transport ore to nearby processing facilities. Workers then use a process called heap leaching to extract gold and other precious metals.

According to geologists, gold is near the surface in this area due to a chain of events that spanned many millions of years. Among them: the closure of an ancient ocean, a period of mountain building, intrusions of granite and water into key rock formations, and the onset of movement along nearby faults.

Astronomers are investigating how gold ended up on our planet in the first place. While nuclear fusion within the Sun can synthesize many elements, the process does not produce enough energy to create heavy elements like gold. Some astronomers think that collisions between neutron stars and supernova explosions may have provided that energy.

Any gold on the planet early in Earth’s history would have sunk toward the core, but intense bombardment by meteorites about 4 billion years ago probably stirred things up and pushed small amounts of the metal into the mantle and toward the surface. By one estimate, gold makes up only 0.000004 percent of Earth’s crust. About 80 percent of known gold reserves have already been mined.