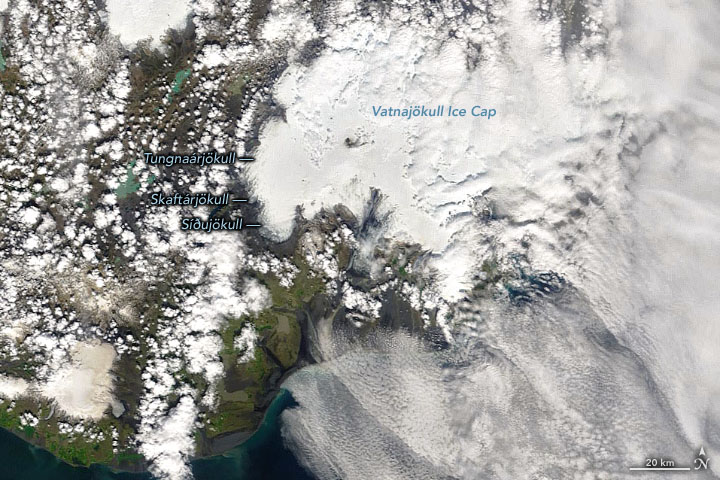 The Vatnajökull ice cap blankets about 8 percent of Iceland in a vast expanse of white. But in July 2022, that white cap was suddenly stained with gray and brown. How the color got there is not quite what you would expect on a damp, icy island.

The change is visible in the image pair above, acquired by the Moderate Resolution Imaging Spectroradiometer (MODIS) on NASA’s Terra satellite. On July 2, 2022 (left), the ice cap appeared generally white. Eleven days later, the surfaces of Tungnaárjökull and nearby glaciers had darkened.

Without new snowfall, the color persisted throughout the month. The Operational Land Imager (OLI) on Landsat 8 acquired a detailed view (below) on July 24. 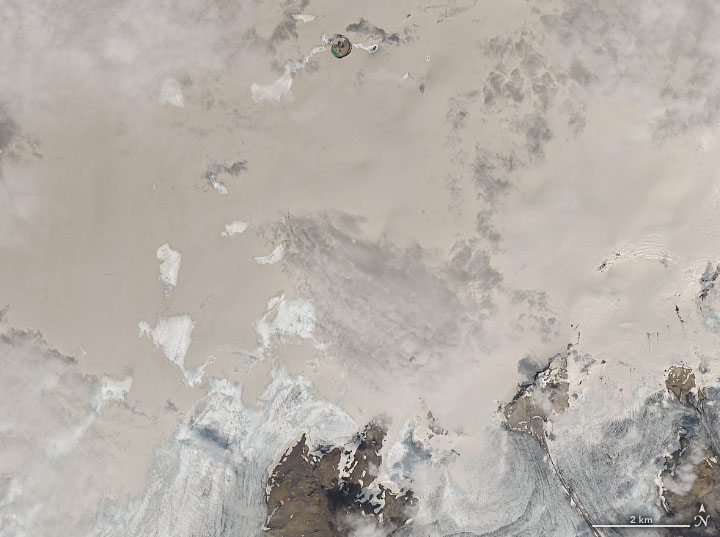 Ash from volcanic eruptions has darkened Vatnajökull periodically in the past. But in July 2022, the volcanoes of Iceland were all quiet. Instead, windstorms likely lofted sand and mineral dust from the ground onto the ice cap. Scientists have estimated that about 4.5 million tons of dust comes to rest atop Iceland’s glaciers each year.

Iceland’s climate is not hot or dry, but it can still be a dusty place. On average, the country sees 135 “dust days,” in which at least one weather station on the island detects dust. Much of it comes from heavily eroded areas at the fronts of glaciers, but also from sandy deserts. Together these dusty surfaces cover nearly a quarter of the country.

The abundant dust and frequent strong winds result in several significant dust storms each year. Some of the particles are lofted all the way to Greenland and its ice sheet. Much of it stays local to Iceland. Thin layers of dust can reduce the amount of light that the ice cap reflects back to space—leading to a cascade of effects, including melting. In contrast, thicker layers of ash can actually insulate the ice from melting.

Overall, Vatnajökull has been losing ice, shrinking in volume by about 15 percent in the past century. But at nearly 8,000 square kilometers (3,000 square miles), it is still the country’s largest ice cap.