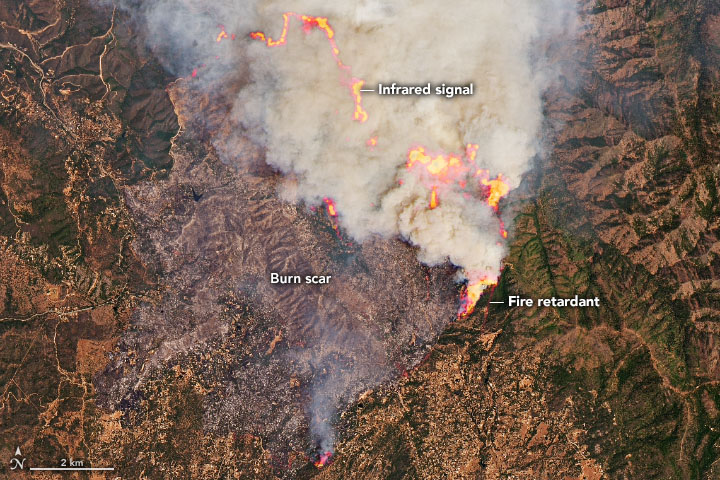 For the second time in a month, wildland fires are burning through parched forests near Yosemite National Park. The fast-moving Oak fire in Mariposa County, west of the park, has forced thousands of people to evacuate their homes. The smaller Washburn fire, now mostly contained by firefighters, burned earlier this month in Madera County, along the southern edge of the park. Both have moved through drought-parched forests that are stressed and vulnerable due to climate change.

On July 24, 2022, the Operational Land Imager-2 (OLI-2) on Landsat 9 acquired an image of the Oak fire (above) and the brown, drought-parched landscape. According to the U.S. Drought Monitor, 90 percent of Mariposa and Madera counties currently face “exceptional” drought, the most severe category on the scale.

Notice the red lines of flame retardant along the eastern flank of the fire. Aircraft including a DC-10, BAe-146, and an S-2T have been observed dropping retardant in the area. Seventeen helicopters are also fighting the fire, along with thousands of firefighters on the ground, according to Cal Fire. 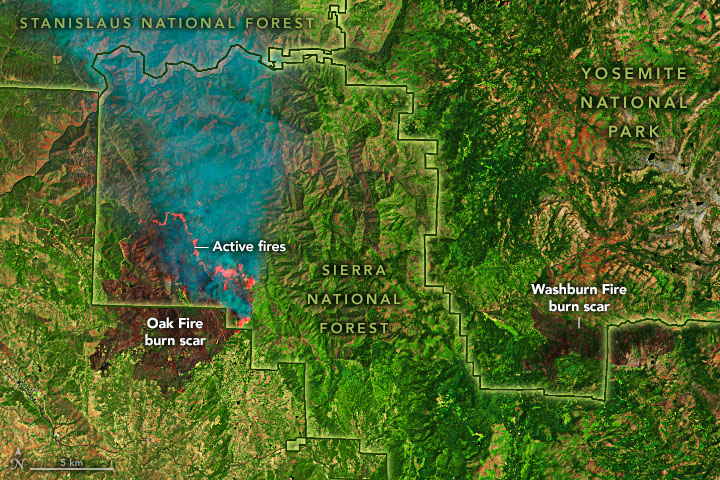 “By recent standards, both of these ongoing fires are actually on the small side,” explained Daniel Swain, a climatologist at the University of California, Los Angeles. “Winds have been pretty weak and typical for this time of year, but the Oak fire has still managed to evade control due to extreme vegetation dryness over the long term and hot conditions in the short term.”

“The link between climate change and Western wildfire is very clear at this point,” Swain said. “Climate change is causing long-term aridification and supercharging the intensity of shorter-term droughts in this region. It is drying out vegetation well beyond historically observed levels and greatly increasing the flammability of entire landscapes. This leads to more severe fires that tend to burn hotter, spread faster, and cause more harm than lower-intensity fires.”

Intentional or “prescribed” fires have played a key role in limiting the spread of both fires this month. Yosemite National Park biologist Garrett Dickman told The Atlantic that decades of prescribed fires in Mariposa Grove have cleared out enough underbrush and small trees that the Washburn fire could not spread north into prized groves of sequoias in Yosemite. The fire instead moved east into areas that have not been burned recently. 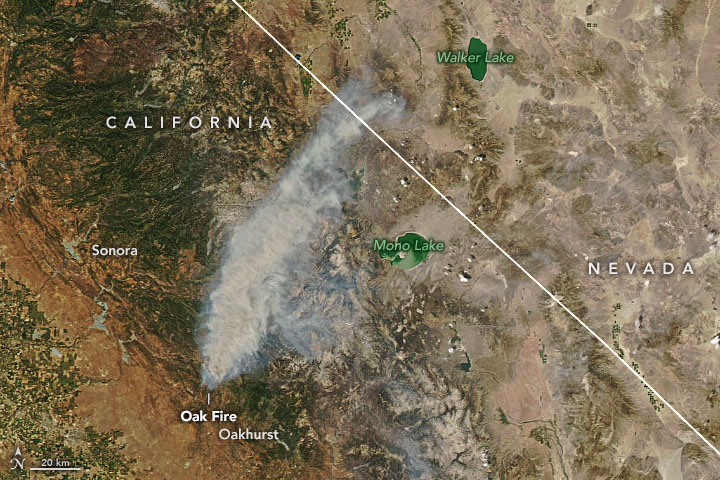 The Moderate Resolution Imaging Spectroradiometer (MODIS) on NASA’s Aqua satellite captured this image of smoke from the Oak fire streaming northeast on July 23, 2022. According to reporting from Wildfire Today, firefighters may have been able to get better control of the Oak fire when it approached an area that was burned in 2018 by the Ferguson fire. With less fuel on the ground, the rate and intensity of the fire’s spread slowed, allowing firefighters to marshal more effective defenses.

“We can’t continue to manage our forests with a ‘postcard ecology’ in mind,” said Keith Weber, a remote sensing ecologist at Idaho State University and a NASA applied sciences advisor. “We can’t continue with the mentality that a given forest looks so perfect, so nice that it should be on a postcard, and we can’t ever let it change one bit. After a fire, an area should look different and maybe even a bit ugly.” 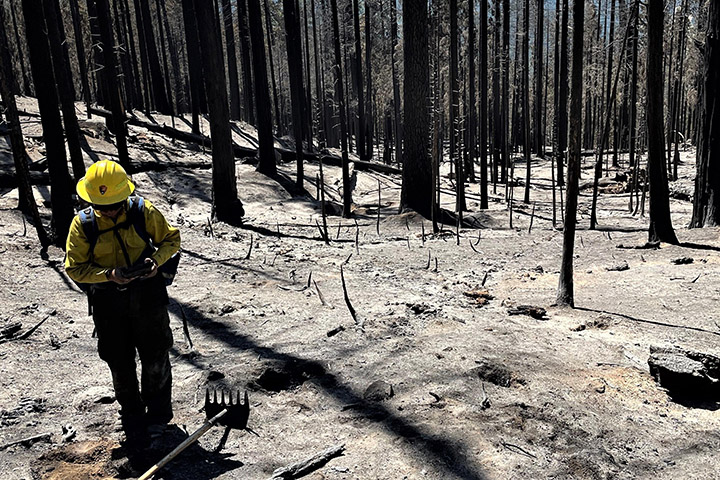 An interagency team has begun assessing lands burned by the Washburn fire to determine how to repair damaged infrastructure and how to protect natural and cultural resources that face increased risk of erosion and flooding. The photograph above shows a fire recovery expert testing soil in an area affected by the fire, which was 87 percent contained as of July 25.