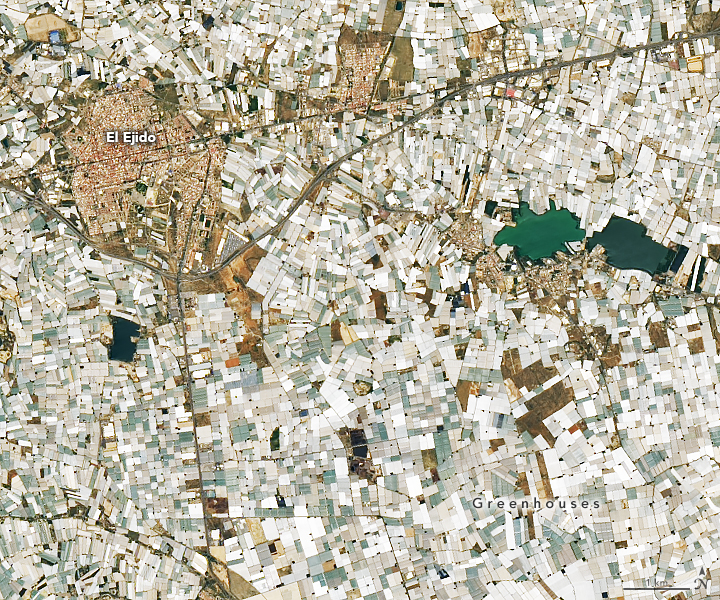 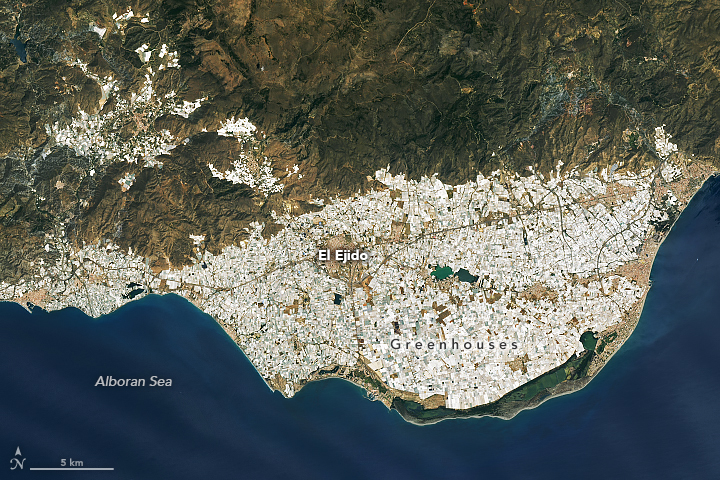 The province of Almería in southeastern Spain has some of the driest conditions in Europe. Yet with access to groundwater and an abundance of sun, it has become a major hub of greenhouse agriculture.

On May 24, 2022, the Operational Land Imager-2 (OLI) on Landsat 9 captured these natural-color images of a sea of plastic greenhouses around the town of El Ejido. The town sits on a small coastal plain called Campo de Dalías, which has one of the highest concentrations of greenhouses in the world.

The greenhouses (invernaderos in Spanish) are a relatively new phenomenon. In the 1950s, Campo de Dalías was mostly covered by scrubby vegetation, pasture, and a few small plots of seasonal crops grown outdoors. Farmers started experimenting with adding layers of sand and mulch to soil along with a covering of plastic in the 1950s and 1960s, initially to protect the soil and plants from damaging winds and salty groundwater. They soon realized that crops grown under plastic were far more productive than outdoor counterparts because soils stayed warmer and retained extra moisture.

The use of greenhouses spread rapidly in the following decades as new innovations, such as drip irrigation, the use of artificial soil, and hydroponics, pushed crop yields up. By some estimates, Almería’s greenhouses now produce between 2.5 million and 3.5 million tons of fruits and vegetables per year, enough to make them a major source of off-season tomatoes, peppers, cucumbers, and melons for people all over Europe.

By some estimates, Almería’s greenhouses now cover more than 40,000 hectares (150 square miles)—nearly all of Campo de Dalías. They have also spilled into neighboring areas. The greenhouses cover so much area that they have likely even caused a localized cooling effect because the white roofs reflect a substantial amount of sunlight.

Using observations from the Moderate Resolution Imaging Spectroradiometer (MODIS) sensors on NASA’s Aqua and Terra satellites, University of Almería researchers calculated that Almería’s surface albedo increased by nearly 10 percent between 1983 and 2006 because of the high reflectivity of the greenhouses. They concluded this likely contributed to a cooling effect of 0.3°C (0.5°F) per decade in Almería compared to a 0.5°C increase per decade in the region.