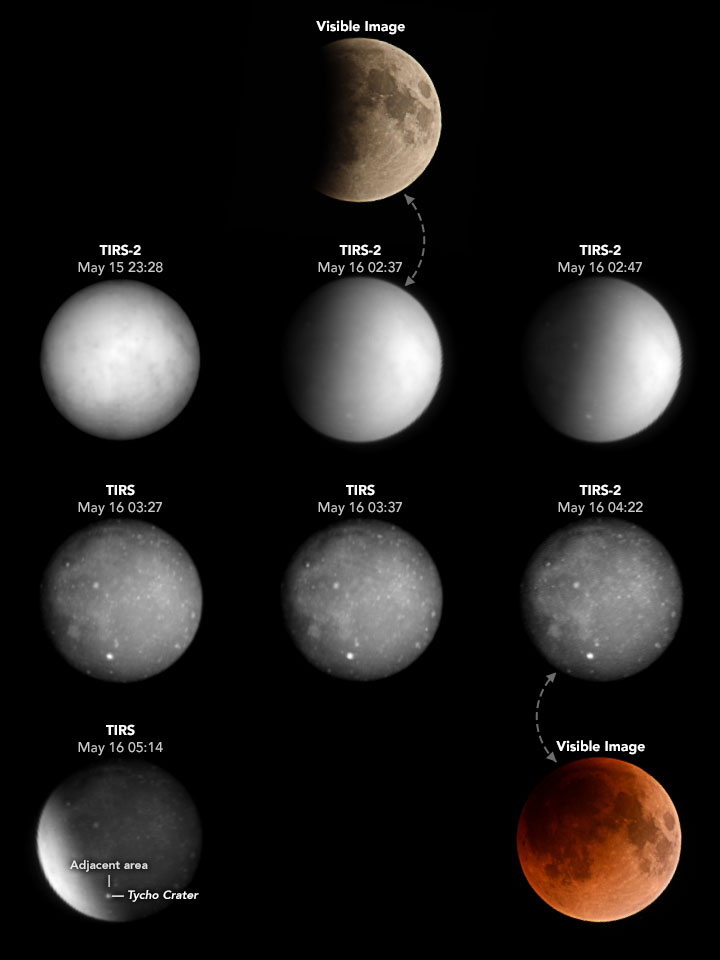 Landsat Looks at the Moon

On May 16, 2022, sky watchers were not the only ones observing the Moon during the longest total lunar eclipse in three decades. Two satellites that keep near-constant watch on Earth also turned to look. In doing so, they observed dramatic and uneven temperature changes across our closest, but still sometimes surprising, celestial neighbor.

The changes are shown this series of images, derived from the Thermal Infrared Sensor (TIRS) on the Landsat 8 satellite and TIRS-2 on Landsat 9. The images have a resolution of roughly 60 kilometers per pixel. Note that the contrast in each image has been adjusted based on the minimum and maximum temperatures of the lunar surface in each scene.

Over the course of the four-hour eclipse, the TIRS sensors observed the intensity of infrared light radiating from the Moon’s surface. From those radiances, scientists calculated the temperatures required to generate them. This “brightness temperature” of the lunar surface changed as Earth’s shadow marched across the lunar landscape. Brighter areas in the images are warmer than darker, cooler areas.

Dennis Reuter, a TIRS instrument scientist, pointed out two notable features revealed by the images. “Look at how quickly the surface cools down when the solar illumination is removed,” he said. “It drops at a rate of more than 100 Kelvin (100°C/180°F) per hour when the full eclipse begins.” Full eclipse—the period during which Earth’s shadow falls across the entire lunar surface—lasted from 03:29 to 04:53 Universal Time on May 16. Notice the quickly darkening (cooling) surface across the middle row of images.

After the removal of solar heating, the most obvious reason for the swift drop in temperature is because the Moon lacks a thick heat-trapping atmosphere. But physical characteristics of the lunar surface are also a factor, Reuter explained. Meteoroids have been pounding the Moon for billions of years, and they have left the entire surface covered with a layer of fine rocky dust, or “regolith.” The tiny size of each particle, and the low-density nature of the loose dust, helps the lunar surface quickly lose heat.

“This feeds into the second interesting point: the craters cool down slower than the material surrounding them,” Reuter said. For example, notice that Tycho Crater appears to stay relatively bright (warm) as the eclipse progresses. The chart below depicts this difference between Tycho Crater and a small region of surrounding terrain over the course of the day. The crater starts out cooler than its surroundings, but it loses heat much more slowly. By the time the crater is in full shadow (last-third of the chart), it is clearly warmer than the surface around it.

One reason for the difference could be that the craters contain less fine-grain dust, or that the materials in them do a better job of conducting heat. “The difference in the cool-down rates between various areas is called a difference in thermal inertia,” Reuter said, “and it gives clues about the variation in the surface characteristics of various regions of the object.”

Using thermal observations to learn about the physical makeup of a distant object is not an entirely new idea. For example, the OSIRIS-REx mission previously made thermal observations of asteroid Bennu at various angles of illumination by the Sun, revealing rocks on the asteroid that are so weak they could be crushed by hand.

That mission gave the TIRS science team an idea: “I realized that the total lunar eclipse would take the Moon’s surface from fully illuminated to nearly completely dark in only a few hours and allow us to get comparable measurements of the lunar thermal properties,” Reuter said. The measurements—if analyzed in context with lunar materials that astronauts have brought back to Earth—could help scientists draw even more concrete conclusions about the relationships between thermal observations and the physical makeup of distant surfaces.

The observations of our nearest rocky neighbor were not exactly straightforward to make, explained Matthew Montanaro of the TIRS science team. Landsat satellites are made to observe Earth, which means that everything from their orbital motion around the planet to the calibration of their sensors is geared toward acquiring images of Earth. But once a month, the flight operations team (managed by the U.S. Geological Survey) commands the satellites to turn toward the Moon’s stable, unchanging surface for the purpose of calibration.

On May 16, mission operators put Landsat 8 and 9 through a similar procedure, modifying it to achieve a view of the eclipse as requested by the TIRS science team. The special request involved additional work by the mission planning, flight dynamics, and flight operations teams at USGS and NASA, who determined the commanding sequences for the satellites, practiced maneuvers on a simulator, and checked to assure that key Earth data would not be sacrificed.

“Landsat has a really great group of people behind the scenes making the observatories work smoothly,” Montanaro said, “even when we try to throw a special request like this at them.”