In the eastern mid-Atlantic, 1,800 kilometers west of the Strait of Gibraltar, the Azores archipelago lies at the junction of the North American, Eurasian, and African plates. The volcanically and seismically active island chain began to form about 10 million years ago over a hotspot in Earth’s mantle. Today, this autonomous region of Portugal is a UNESCO Global Geopark.

The most volcanically active island is São Miguel, shown above in these images acquired on December 9, 2018, by the Operational Land Imager (OLI) on Landsat 8.

At 760 square kilometers (290 square miles), São Miguel is the largest of the nine Azores islands and home to half of its people—most of whom live in Ponta Delgada, the economic capital of the Azores. The island’s highest point is Pico da Vara, which rises to an elevation of 1,080 meters (3,545 feet) above sea level.

São Miguel comprises six volcanic zones that formed in the last 3 million to 4 million years. But the island didn’t take on its modern shape until about 50,000 years ago, when an eruption of land-forming lava joined the eastern and western volcanic massifs.

The oldest of the six volcanic zones is in the east; the youngest is in the west, where the most recent volcanic activity occurred. Three of the volcanos are still active, though dormant, including Sete Cidades, which last erupted from a submarine vent off the west coast in 1880. 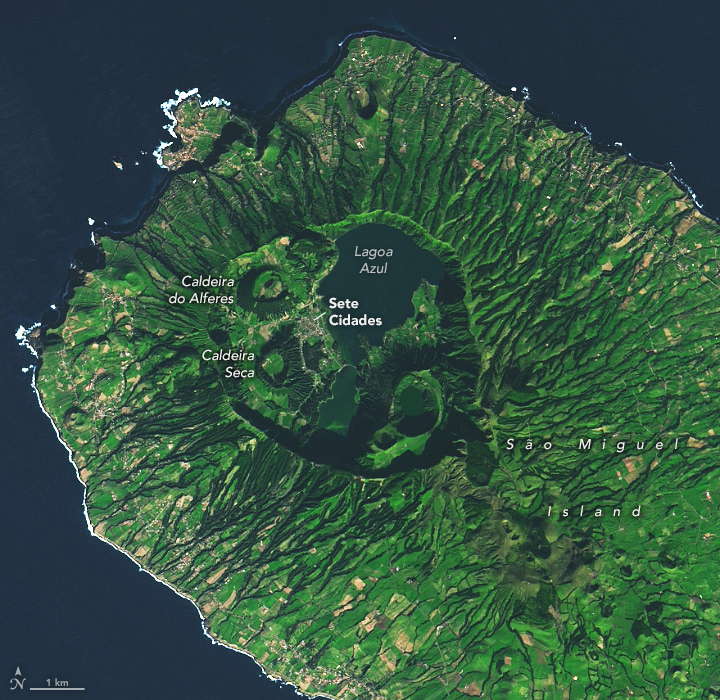 In this detailed view, a series of smaller volcanic cones and two lakes are visible inside the caldera of Sete Cidades. The summit caldera, about 5 kilometers (3 miles) wide and 400 meters (1,300 feet) deep, formed when the summit collapsed about 22,000 years ago. Two other volcanic cones also appear in the image: Caldeira do Alfreres, which formed during an eruption around 2050 BCE, and Caldeira Seca, which last erupted in 1444.

Sete Cidades Lake is made up of two connected branches: Lagoa Verde (Green Lake) and Lagoa Azul (Blue Lake). Together they cover 4.5 square kilometers (1.7 square miles). The lake water is high in sodium and chloride due to sea salt spray.

The lakes are also prone to eutrophication, or excess nutrients. These phosphorus and nitrogen inputs come from agricultural activities, including livestock. Eutrophication happens most often in the northern part of Green Lake, leading to excess aquatic plant growth and algal blooms.