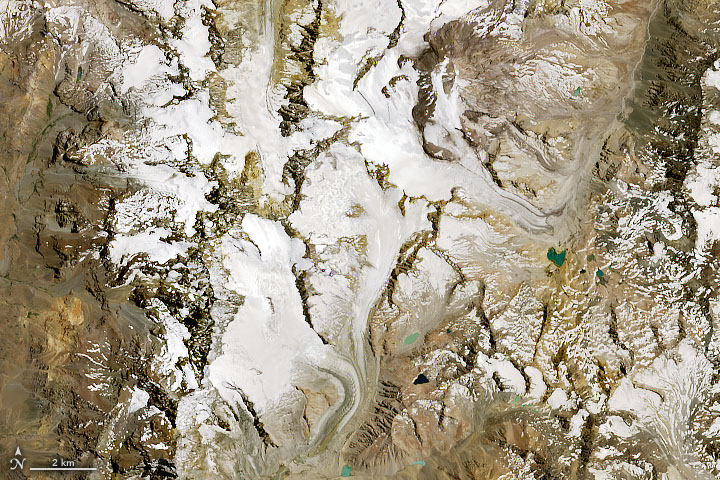 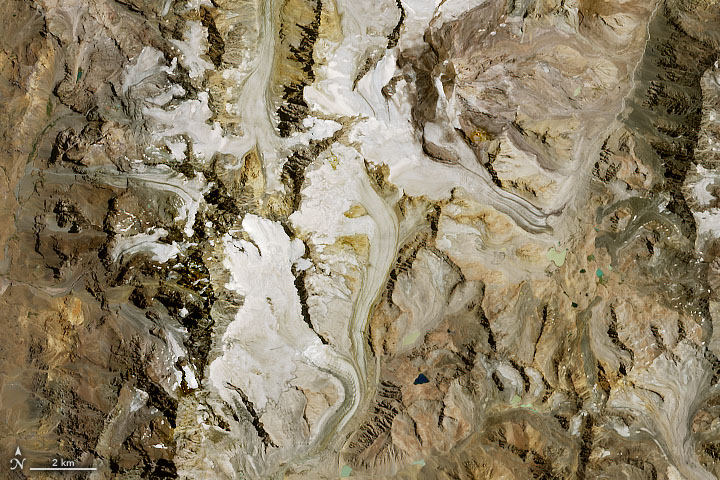 Losing a Layer of Protection

The central Andes are typically draped with snowfall for much of the summer. The bright blankets of white aren’t just scenic; they’re also protective. Fresh snow is highly reflective, so it prevents underlying glacial ice from absorbing the Sun’s energy, warming up, and melting.

This year, extreme heat removed those protective blankets from the mountaintops, creating the conditions for rapid melting of glaciers. “Bare glaciers melt faster because the lack of snow cover exposes ice that is darker and typically plastered with dirt, dust, and debris that absorbs more heat,” explained Nichols College glaciologist Mauri Pelto. “When glaciers lose their snowpack, they're much more vulnerable.”

The snow on the mountains typically recedes slowly, with glaciers remaining mostly covered through mid-summer. But in summer 2022, an early season heatwave caused many glaciers in the central Andes to lose their snow unusually early. Temperatures soared to 40°C (104°F) in January 2022, rapidly melting off snowpack on several glaciers and exposing darker, dirtier ice.

The pair of images above from the Operational Land Imager (OLI) on Landsat 8 underscore how quickly the heat wave eliminated snow from a cluster of glaciers about 50 kilometers (30 miles) east of San Fernando, Chile. The image on the left shows a bright, reflective blanket of fresh snow on Universidad, Cortaderal, and other nearby glaciers on November 28, 2021; by January 15, 2022, nearly 90 percent of the snowpack was gone and the dark lines of debris-rich lateral and medial moraines dominated the view.

“Unfortunately for these glaciers, the heatwave came early in the summer,” said Pelto. “The ice was sitting out there without sunscreen for two-and-a-half months until snows arrived again in late March.”

Decades of satellite monitoring indicate these glaciers are retreating. The terminus of Cortaderal glacier, for instead, has retreated by 1300 meters (nearly 1 mile) since 2014.

Research indicates that extreme summer heatwaves like this are becoming more intense and frequent in South America and other parts of the world as climate changes. They have also likely contributed to the trend toward darker, less snowy mountains in the central Andes—something scientists have observed in daily satellite collected from 2000 to the present.

“Glaciers are simply not compatible with recurring heatwaves, and the intensity and frequency of these is increasing,” Pelto wrote in his blog, From a Glacier’s Perspective. “This year, for the 34th consecutive year, alpine glacier volume will decline; their business model is not sustainable with our climate.”