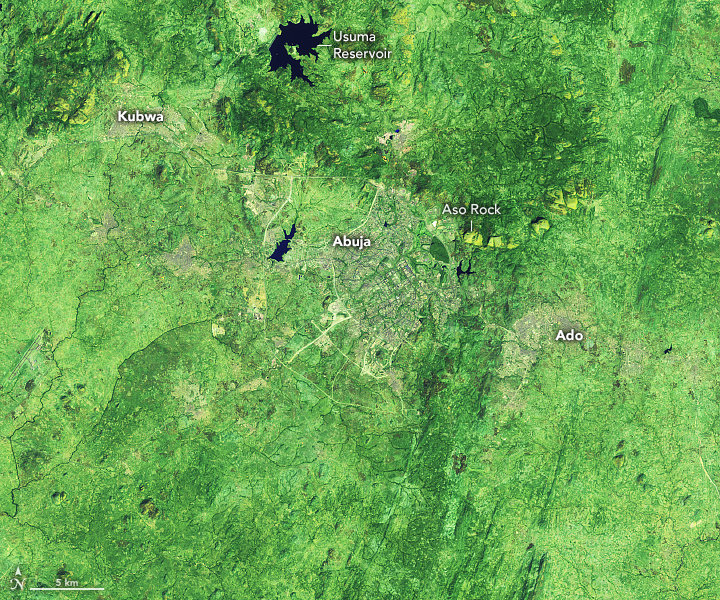 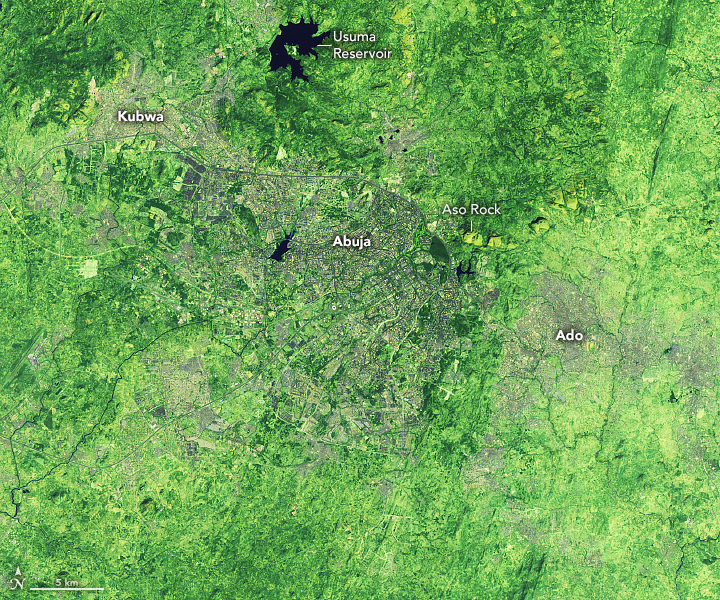 In 1979, the government of Nigeria approved a plan to build Abuja, a new capital city that would be located near the geographic center of the country. The previous capital, Lagos, a coastal city in the southwest, lacked the space and ethnic diversity that leaders envisioned for a modern capital.

At that time, there were 500 to 600 villages in the area with a total population of about 300,000 people. In the past four decades since Nigeria designated the Abuja Federal Capital Territory, the population has swelled to at least 3.6 million people (estimate for 2022).

The Landsat 7 and Landsat 8 satellites captured these false-color images (bands 7-6-4) of the city in 2001 and 2021. This combination of shortwave infrared and red light makes it easier to distinguish developed areas (gray) from the surrounding grasslands (light green), forests (dark green), and farmland/bare land (yellow).

New development has extended southward from Aso Rock, a granite outcrop that rises 400 meters (1,300 feet) above the plains around it. Some of the city’s landmark sites were built immediately southeast of the rock, including the Nigerian Presidential Complex, the Nigerian National Assembly, and the Nigerian Supreme Court.

The city’s master plan called for development to extend outward from Aso Rock in phases, mostly to the southwest. Initially, development proceeded in a somewhat orderly fashion. But one team of researchers that tracked Abuja’s development trends with Landsat data noted that large amounts of unplanned development serving low-income Nigerians began to spring up outside of the planned neighborhoods. The unplanned development was often centered in satellite towns in Abuja’s suburbs, including Ado and Kubwa.

The same team found that the percentage of forested land in Abuja Federal Capital Territory has remained at about 10 percent since the 1980s. However, the researchers observed significant losses of forest southeast of the city due to logging and agriculture. The losses have been offset by the establishment of many new forests in parks and preserves throughout the territory.