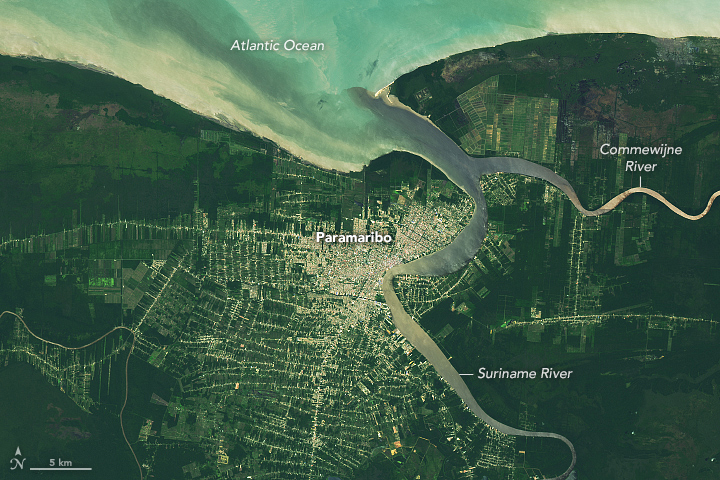 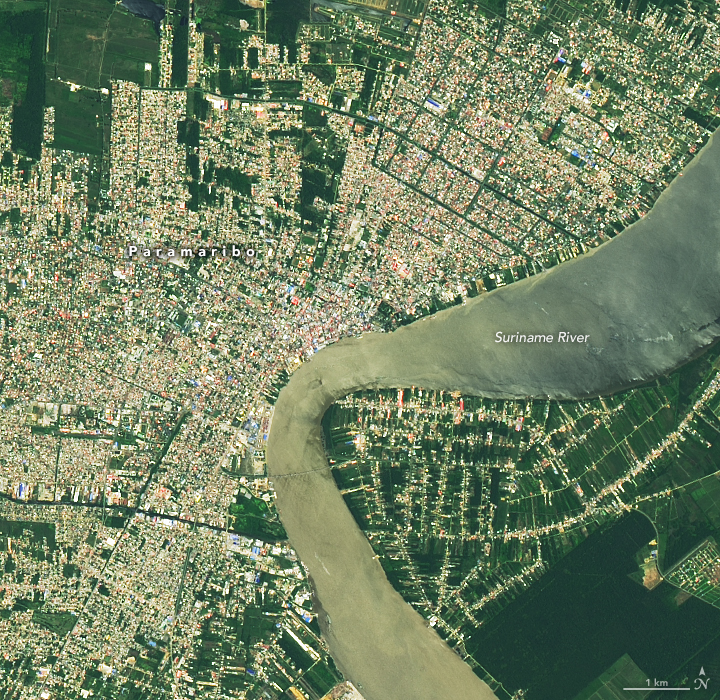 This Image of the Day is the answer to the June 2022 puzzler.

The Suriname River flows nearly 500 kilometers (300 miles) on its journey from the Guiana Highlands through the Brokopondo Reservoir to the Atlantic Ocean. As it approaches the coast, it passes Paramaribo, Suriname’s capital and largest city.

On September 10, 2020, the Operational Land Imager (OLI) on Landsat 8 acquired this natural-color image of the city. Paramaribo is centered on the west bank of the Suriname River, with the historic city center and main port located along the sharp bend in the center of the image. The image below shows neighborhoods south of Paramaribo in the Wanica district along the Tout Lui Faut canal. An oil refinery and port facilities are visible at the end of the canal along the river’s edge. 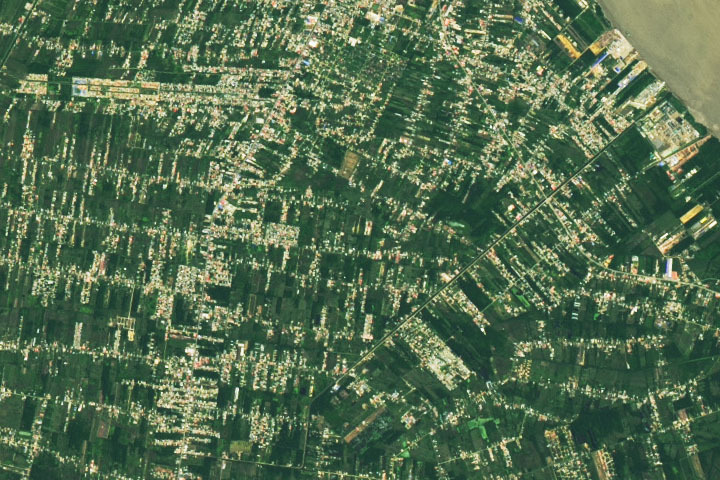 The United Nations (UN) has designated part of the city center as a world heritage site. “Composed of mainly wooden buildings, the plain and symmetrical architectural style illustrating the gradual fusion of Dutch and other European architectural and later North American influences, as well as elements from Creole culture, reflects the multi-cultural society of Suriname,” the UN said in its description of the site.

Indigenous groups have lived in this region for thousands of years, but the modern footprint of the city dates to 1613, when the Dutch established a trading post at the mouth of the Suriname River. England and France also had settlements along the river early in Paramaribo’s history, but the Dutch asserted full control of the area in 1667 during the Second Anglo-Dutch War. Until the mid-19th century, Dutch planters in the area relied on the labor of enslaved people to produce sugar, coffee, cacao, cotton, and other crops.

In modern times, Paramaribo has grown to be a city of 240,000 people, half of Suriname’s population. The country’s main exports are bauxite, gold, oil, hardwood, and bananas.

In these images, suspended sediment has muddied parts of the river and estuary. Much of the coarser-grained sand that once flowed down the river is now trapped upstream by the Afobaka Dam, so much of the sediment is likely fine-grained particles of clay. Scientists have conducted research that shows coastal currents also carry significant amounts of sediment from the Amazon River, which drains into the Atlantic Ocean about 800 kilometers (500 miles) to the southeast.