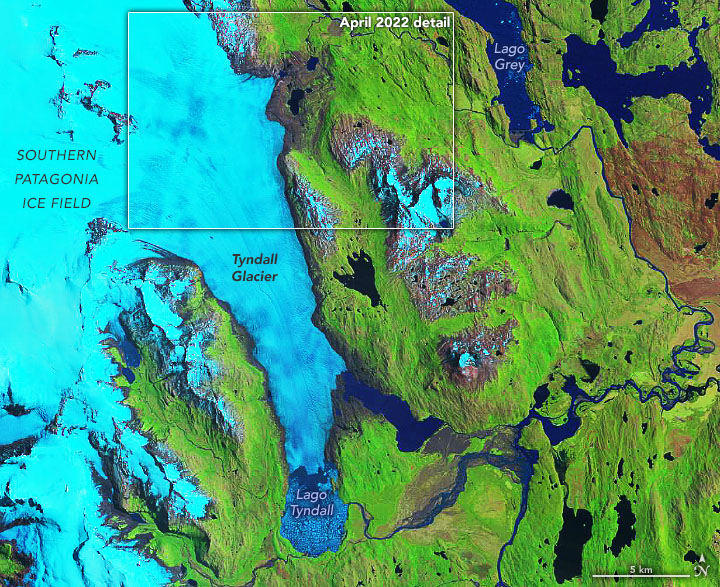 As glaciers have melted in our warming world, they have exposed pieces of the past, from Stone Age artifacts to wartime relics. But the retreating Tyndall Glacier in Chile has uncovered something much older: a prehistoric graveyard of ichthyosaurs.

Ichthyosaurs were marine reptiles, or “fish lizards,” that resembled modern-day porpoises. They swam in the oceans between 250 and 90 million years ago, around the same time that dinosaurs walked on land and pterosaurs soared in the air. The creatures are now extinct, but their fossils continue to inform scientists about the species and how they evolved.

So far, paleontologists have found 76 ichthyosaurs in the bedrock adjacent to Tyndall Glacier in the Southern Patagonia Ice Field. Some of the fossils were uncovered during an expedition to the site in March and April 2022, when scientists visited to extract “Fiona,” a complete fossilized skeleton of a 4-meter-long female with several embryos. The fossil, between 129 and 139 million years old, was discovered in 2009 by Judith Pardo-Pérez of the University of Magallanes. The photograph below shows Pardo-Pérez and Fiona next to Tyndall Glacier in 2010. 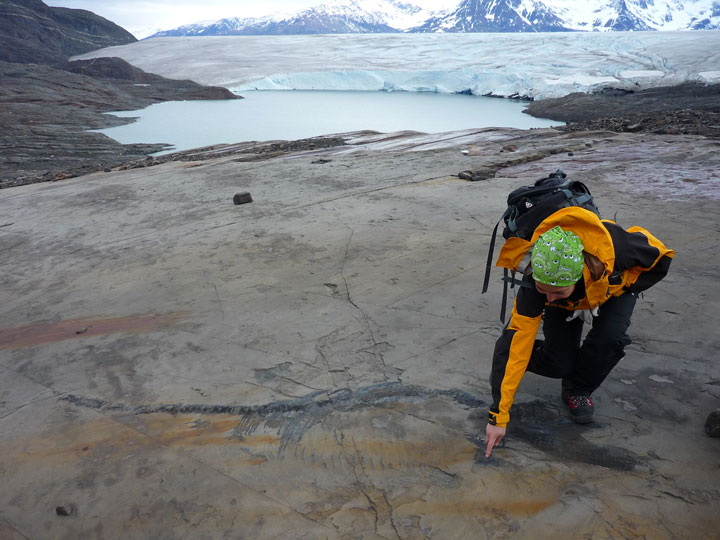 Just a few decades ago, paleontologists would have likely missed some of these discoveries. Camilo Rada, a glaciologist at University of Magallanes, estimated from photographs that Fiona has been uncovered since at least 1965. “But other ichthyosaur fossils in the area were uncovered much earlier, others much more recently, and in all likelihood, some are becoming uncovered as we speak,” Rada said.

The pair of satellite images at the top of this page shows the glacier’s edge on January 14, 1986, and on January 17, 2022. The images were acquired by the Thematic Mapper on Landsat 5, and by the Operational Land Imager (OLI) on Landsat 8, respectively. The false-color allows a better color match between the two images that were collected by different sensors.

Fiona would have already been exposed by the time of these images. But according to Dean Lomax, a paleontologist at the University of Manchester, “I’m certain that many of the specimens were under the glacier in the 1986 image.” That includes a well-preserved complete skull previously discovered by Lomax, who was part of the recent expedition to excavate Fiona. 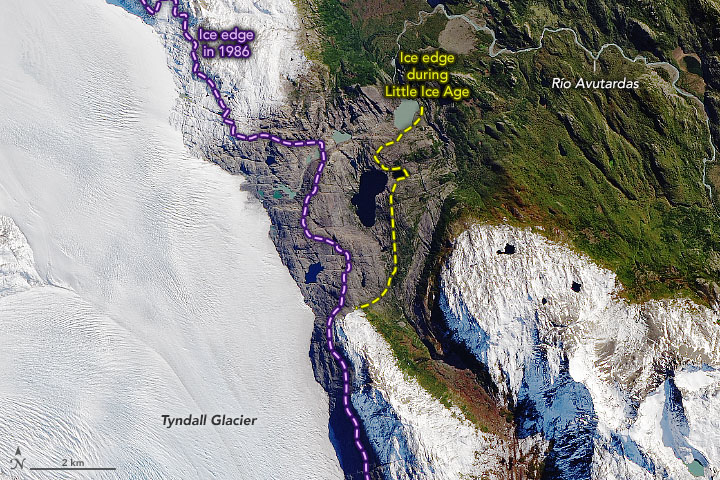 The exposed bedrock corresponds to an area where, during a typical year, the melting of snow and ice has outpaced new snow accumulation. A detailed view of this “ablation” area along the glacier’s eastern side is visible in the natural-color image above, acquired by Landsat 8 on April 7, 2022—one of the few cloud-free days during the recent month-long expedition. Lines indicate previous locations of the ice edge, including its last maximum extent around 1700 during the Little Ice Age, and its retreated position as of 1986. Over the past few decades, parts of the glacier’s edge have retreated by as much as 2 kilometers.

In 2004, when Pardo-Pérez began prospecting the area, scientists estimated that the fossil site spanned about 5 square kilometers. But as the ice edge retreated and the landscape changed—and as subsequent expeditions located more fossils—the site has been expanded to about 15 square kilometers, or nearly all of the exposed rock area visible in this image. The rock is part of the Zapata Formation, which contains sedimentary rocks and fossils dating from the late Jurassic to early Cretaceous periods.

The fossilization occurred millions of years before the glacier appeared, when the area was covered with seawater. Scientists think some of the ichthyosaurs died from natural causes. Others likely perished in mass mortality events caused by the rapid, downslope flow of water, known as a turbidity current. “In these cases,” Pardo-Pérez said, “ichthyosaurs might have been trapped by the turbidity current and been thrown down to the abyss, drowned, disorientated, and buried almost instantaneously in an anoxic environment that prevented bacterial decomposition and kept their skeletons articulated.“

The glacial ice that eventually covered the fossils has not helped preserve them. On the contrary, Rada pointed out that prior to the ice melting, it had been “flowing” for a long time. This flow of ice transports rocks and dirt at its base, which Rada compares to a heavy piece of sandpaper, grinding at the bedrock and the fossils within it.

In Patagonia, erosion rates range from 1 to 100 millimeters (0.04 to 4 inches) per year—probably on the lower end of that range at the side of Tyndall Glacier. “But even with erosion rates of a few milliliters to one centimeter a year,” Rada said, “Fiona would have been turned into powder if it had remained covered by the glacier a few more decades.”

However, the loss of the ice poses other problems. Fossils are left vulnerable to fracturing from freeze and thaw cycles and to erosion from wind and water. “It is important to find ways to protect these invaluable records of the past,” Rada said.

Fossils are likely becoming exposed near other glaciers, as the entire Southern Patagonia Ice Field is melting. But until the paleontologists conduct more prospecting expeditions, the site near Tyndall Glacier remains a unique paleontological find. “To our knowledge, there is no other site in the world where so many exceptional fossils are being exposed due to a retreating glacier,” Lomax said.

The site is protected by Chile’s National Forest Corporation (CONAF), and its fossils are protected by Chilean law that forbids extraction or excavation without a permit. “This place is a fragile ecosystem, located in a periglacial area inside the Torres del Paine National Park,” said CONAF manager Gonzalo Cisternas. The area is closed to tourism and recreation, and can only be visited by permitted scientists.