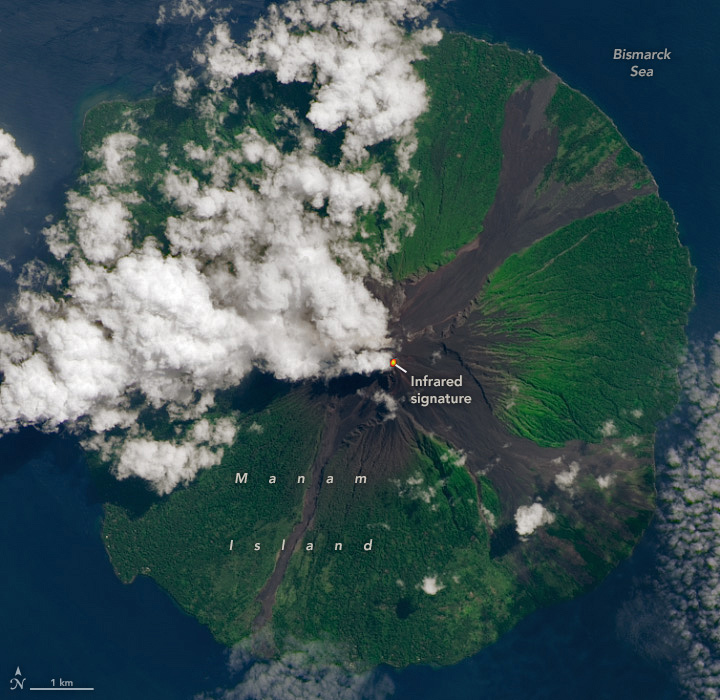 The island of Manam, in the Bismarck Sea off the northeastern coast of Papua New Guinea, is one of the most active volcanoes in the South Pacific. In May 2022, the Darwin Volcanic Ash Advisory Centre issued several aviation alerts for ash plumes rising from Manam. On May 17–19, ash plumes reached altitudes up to 2.4 kilometers (1.5 miles) above sea level and drifted northwest and west.

On May 22, 2022, the Operational Land Imager (OLI) on Landsat 8 observed an infrared signature, indicating heat in Manam’s southern summit crater. The southern crater has historically been the more active of the two summit craters, according to the Smithsonian Global Volcanism Program.

An October 2021 eruption emitted an incandescent plume and ejected an ash cloud to a height of 15.2 kilometers (9.4 miles). Intermittent ash plume eruptions continued in late 2021 and into 2022. In early March 2022, researchers from the Rabaul Volcanological Observatory reported a small pyroclastic flow descending Manam’s flank. The eruption was accompanied by ash emissions and “characterized by loud roaring and rumbling heard on the mainland.”

Four valleys radiate from the classic conical peak of this stratovolcano, which rises to an elevation of 1,800 meters (5,900 feet) above sea level. Three of the valleys, locally called avalanche valleys, are visible in the image. The valleys have channeled many of the previous lava and pyroclastic flows, some of which enter the sea. However, some eruptions have jumped out of the valleys and reached populated areas on the lower flanks of the volcano. Most of Manam’s 9,000 residents were evacuated during a major eruption in 2004, but many people have since returned. A 2005 eruption sent a large cloud of sulfur dioxide drifting west over the island of New Guinea.

Papua New Guinea is home to 14 active and 22 dormant volcanoes that present a risk to an estimated 250,000 people. Of those, Manam is one of six that scientists have categorized as high-risk. The island has also been identified as one of several volcanoes where an eruption or flank collapse could possibly produce a tsunami.

The southwest Pacific—where the Pacific and Australian plates are converging—is a very active and complex tectonic zone. The presence of many microplates means many different types of tectonic boundaries occur in close proximity. Plates are colliding, diverging, or grinding past one another here.

Manam is part of the Bismarck volcanic island arc. These chains of volcanic islands form over subduction zones. As one plate dives beneath another, magma rises to the surface and punches through the overlying plate to form a volcano.