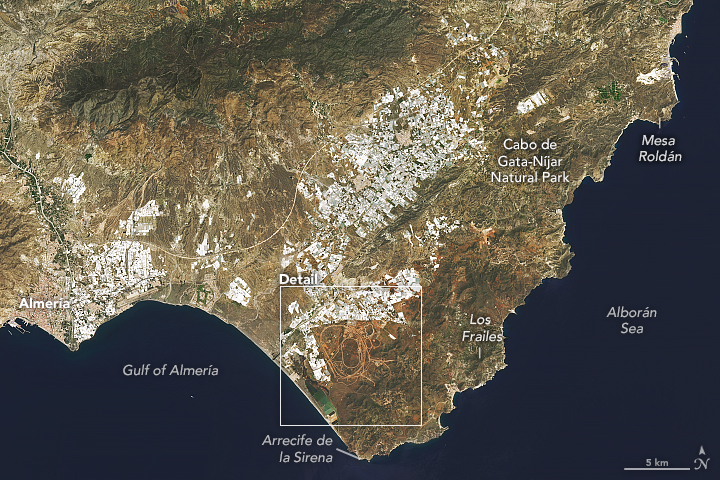 The Tabernas Desert in southeastern Spain has been called mainland Europe’s only desert. But just 30 kilometers away, Cabo de Gata-Níjar Natural Park is nearly as dry. The park’s semi-arid climate and volcanic features contribute to the peculiar landscape along more than 60 kilometers of the Mediterranean coastline.

The Operational Land Imager-2 (OLI-2) on Landsat 9 acquired this image on May 17, 2022. The wide view shows the city of Almería on the coast of Andalucía. The Tabernas Desert lies to the north, in the rain shadow of a mountain ridge, and Cabo de Gata-Níjar Natural Park is to the east along the coast of the Alborán Sea.

Both the desert and the park are part of Spain’s Almería Province, the driest area of Europe. The region receives just 20 centimeters (8 inches) of rain per year, though the coastal areas are somewhat more humid. There is enough moisture to support nearly 1,000 species of plants, such as the European fan palm and a thorny shrub known as jujube.

When viewed from orbit, the park’s most obvious features are volcanic—that is, the 5 percent of the volcanic complex that rises above the water. The remaining 95 percent is hidden from view below the sea’s surface. Volcanic activity began here about 16 million years ago and ended about 8 million years ago. Wind and seawater have eroded some of the lava flows into smooth, strange shapes. Other structures just offshore have partially crumbled away. For instance, the tall, jagged rocks jutting from the water at Arrecife de la Sirena are thought to be remains of an old volcanic structure.

Within the volcanic range, Los Frailes is the tallest peak. The volcano consists of two domes, the tallest reaching nearly 500 meters (1,600 feet) above sea level. Like the rest of the range, activity at this volcano ended around 8 million years ago. A trail to the peak’s summit rewards hikers with a striking view down the coastline.

Some of the volcanic domes, such as Mesa Roldán, have tops that are unusually flat. Around 6 million years ago, when the dome was under water, corals established a reef on its top. This flat reef area eventually fossilized and became exposed as sea levels dropped.

Modern additions to the landscape are also apparent. The area has a rich mining history, with some evidence of mining activities dating back to the Romans. More recently, on the hills around Rodalquilar, gold mines were constructed in 1940 and operated until 1966. 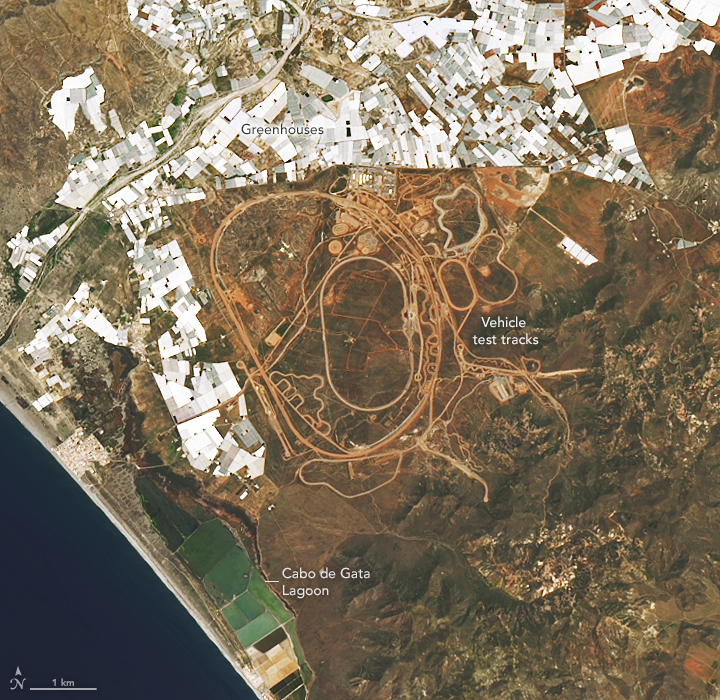 More modern still, an array of roadways has been etched into the semi-arid desert floor just outside the park. These are part of a 45-square-kilometer (17-square-mile) test track. Vehicles of all types are tested on various types of surfaces within the region’s dry and dusty environment.

Not every place here is dry: Notice the coastal lagoon just southwest of the track. A spit of dunes and beaches separate Cabo de Gata lagoon from the sea. The lagoon’s geometric shapes are the result of salt extraction operations.

Freshwater for growing produce primarily comes from groundwater. Notice the blocky pattern of white structures next to the lagoon and track. These are mostly greenhouses set up to take advantage of the abundant sunshine. Even more greenhouses crowd a small coastal plain 30 kilometers southwest of Almería.