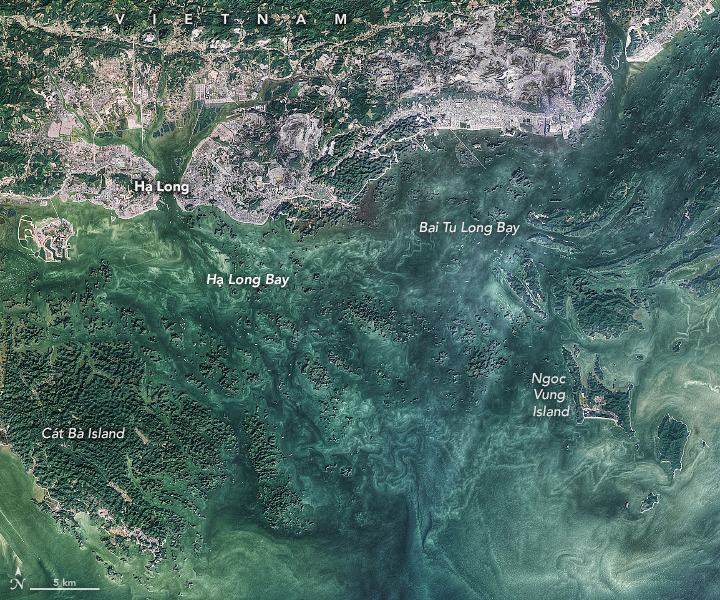 Hạ Long Bay covers about 1,500 square kilometers (600 square miles) along the northeastern coast of Vietnam and holds more than 1,600 islands. The mountainous limestone islands—the tallest of which tower up to 400 meters (1,300 feet) above the water—are some of the world’s most visible and famous examples of karst features.

Karst landscapes form in humid environments with highly soluble and fractured carbonate or evaporite rocks, like limestone or gypsum. These landscapes have distinctive features such as sinking streams, sinkholes, caves, springs, and fluted rock outcrops.

Hạ Long Bay and nearby Bai Tu Long Bay—on the northeast coast of Vietnam, about 170 kilometers (100 miles) east of Hanoi—are shown in the above image, which was acquired on December 1, 2021, by the Operational Land Imager (OLI) on Landsat 8.

The two bays contain a notable range of karst formations, including pillars, conical peaks, arches, and caves. Cát Bà island, seen in the lower left of the image, is known for its many caves as well as its national park.

With an annual average temperature of 24°C (75°F), an annual average rainfall of 2,300 mm (90 inches), and a relative humidity of about 90 percent, Vietnam has the ideal conditions for karst landscapes. In fact, they cover about 60,000 square kilometers (23,000 square miles) or 18 percent of the country, primarily in central and northern Vietnam.

The limestone that makes up the island mountains was deposited between about 390 million and 260 million years ago when shells and carbonate sediments were deposited on the bottom of the sea. Over a hundred million years, a blanket of limestone more than a kilometer (0.6 miles) thick built up. Then, about 40 million years ago, faulting and plate tectonic activity uplifted the limestone, subjecting it to the forces of erosion that produced the steep islands we see today.

The erosion of karst landscapes also produces highly fertile soils that support abundant biodiversity. Some species living in Vietnam's karst landscapes are found nowhere else in the world. Some of these endemic species, such as an iridescent snake found in 2020, are still being discovered.

The thick evergreen vegetation that covers the islands also hints at how the bays were named. Hạ Long translates to “descending dragon.” According to Vietnamese legend, a mother dragon and her children thwarted an attack in the Eastern Sea, incinerating the enemies with fire and emeralds from their mouths. The mother dragon then landed in what is known today as Hạ Long Bay; her children set down in Bai Tu Long Bay; and the emeralds formed the forested islands seen in the bays today.

Most of the islands in Hạ Long Bay, which was named a UNESCO World Heritage site in 1994, are uninhabited and unaffected by humans. Elsewhere, however, karst ecosystems are vulnerable to degradation from mining for cement and other human threats.