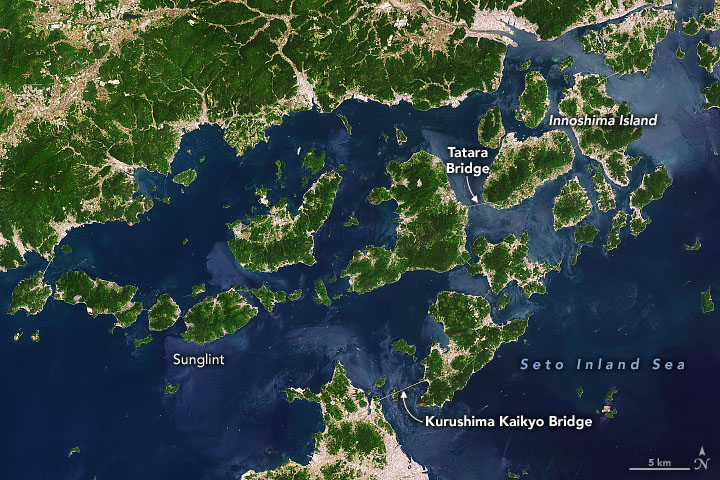 Whirlpools and other complex currents routinely roil Japan’s Seto Inland Sea. Strong tidal currents send water churning through a maze of channels and narrow straits surrounding thousands of islands in the shallow sea. The islands of the Geiyo archipelago are among them.

On May 30, 2021, the Operational Land Imager (OLI) on Landsat 8 captured this natural-color image of currents swirling around several of the Geiyo islands. The complex topography creates areas of choppy and smoother waters depending on the day’s weather and water flows. In this image, some water surfaces gleam with sunglint, an optical phenomenon that occurs when sunlight reflects off the surface of water at the same angle that a satellite sensor views it.

One of the most densely populated islands of the group is Innoshima, a mountainous island home to ports, aquaculture, and a rich maritime history. In the 14th and 15th centuries, a clan of “police pirates” known as the Murakami Kaizoku used Innoshima and other nearby islands as their base of operations.

The turbulent waters were part of the reason why. Though the group did not engage in violent looting or lawlessness, they did collect a fee for serving as guides and protectors of ships passing through the area. When the practice was prohibited in 1588, the group began transitioning into an early version of the Japanese coast guard, according to Japan Today.

While boats were once the only way to move between the Geiyo islands, a modern network of roads and bridges now link several of them. Fifty-five bridges of the Nishiseto Expressway connect nine of the islands, including the largest three: Ōshima, Ōmishima, and Innoshima.

The Kurushima Kaikyo Bridge, which links Ōshima to Shikoku, is the most visible bridge in the Landsat image. Spanning 4,015 meters (13,173 feet) and comprising three sections, it was one of the longest series of continuous suspension bridges in the world when completed in 1999. To the north, the Tatara Bridge is among the longest cable-stayed bridges in the world.