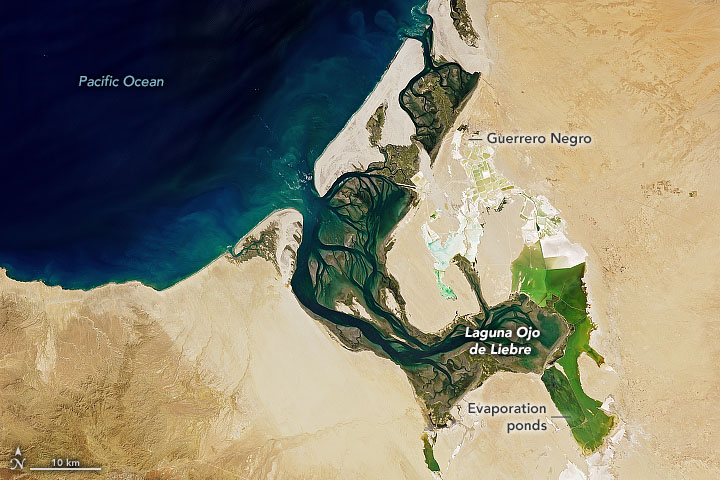 Laguna Ojo de Liebre on the Pacific coast of Mexico is the site of one of the largest saltworks in the world. The lagoon and saltworks lie near the town of Guerrero Negro, about halfway between the U.S-Mexico border and the southern tip of the Baja California peninsula.

The saltworks was founded here in 1954. Each year, workers extract 9 million metric tons of salt by evaporating and crystallizing seawater in collection ponds that cover 33,000 hectares (82,000 acres). The evaporation and crystallization ponds surrounding Laguna Ojo de Liebre are featured in this natural-color image, which was acquired on March 23, 2022, by the Operational Land Imager (OLI) on Landsat 8.

In addition to salt production, the area also supports commercial fisheries and ecotourism. The lagoon is part of the Vizcaíno Biosphere Reserve. This UNESCO World Heritage Site, the largest protected area in Mexico, is an important whale sanctuary for the North Pacific grey whale. The whales migrate between their winter nursery grounds in the lagoons and their summer feeding grounds in the Chukchi, Beaufort, and Bering seas. Between January and March, some coastal towns host festivals celebrating the gray whales as they come to birth calves after their long migration. The lagoons also host countless other marine species and migrating birds.