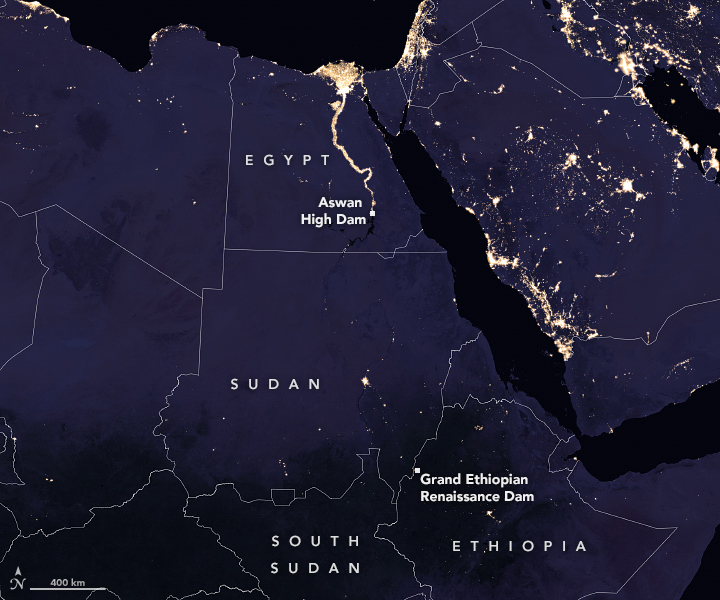 A Grand New Dam on the Nile

Editor’s note: Read more about this project in Keeping a Satellite Eye on GERD.

With three spillways and 13 turbines, the concrete structure will rise 145 meters (475 feet) and create a reservoir that will cover 1,874 square kilometers (724 square miles) of land, an area about the size of Houston, Texas. Called the Grand Ethiopian Renaissance Dam (GERD), it should more than double Ethiopia’s output of electricity.

If it works as planned, GERD will usher in a new era and help brighten the mostly dark landscape that appears in nighttime images of Ethiopia. (In the Suomi-NPP satellite composite above, note the contrast between the darkness of Ethiopia and the bright trail of light along the Nile River in Egypt, where World Bank data indicates that 100 percent of the population has access to electricity.) In addition to generating electricity, GERD should temper destructive seasonal floods in Sudan, boost food supplies in Ethiopia by providing reliable irrigation water, and extend the lifespan of other dams downstream on the Nile by trapping sediment.

However, by changing the river’s hydrology, the dam may have an impact on millions of people who live and farm downstream in Egypt and parts of Sudan and use the Nile’s water. The natural-color image of the Nile’s Great Bend shown below underscores how much the people of Egypt depend on the Nile: 95 percent of Egypt’s farmland is found within a narrow zone near the riverbanks. 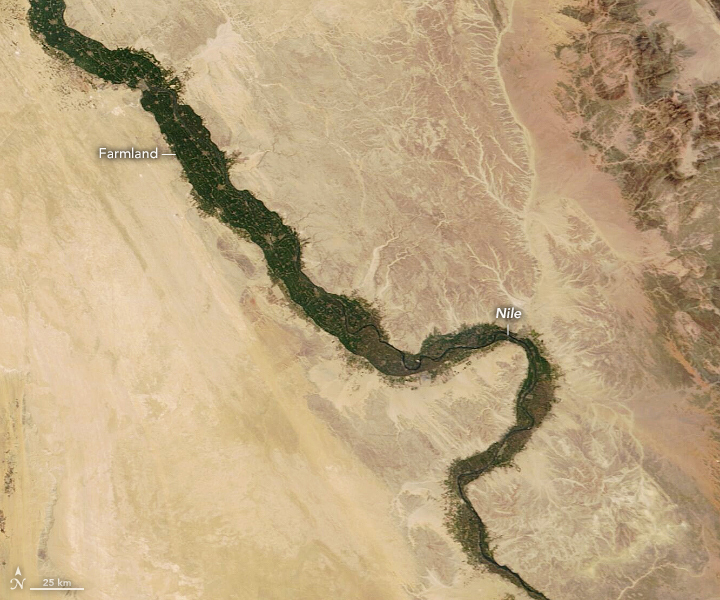 After 10 years of construction, GERD is almost complete. In 2020, water managers started filling the reservoir, a process that could take from a few years to a decade depending on weather conditions and how much of the Blue Nile’s flow the dam managers hold back. Ethiopia has an incentive to fill the reservoir quickly to start generating power and start paying for the $5 billion dollar project. However, rapid filling could significantly reduce the water downstream since the Blue Nile provides 60 percent of the water that flows into the Nile.

“While the dam will certainly have positive effects in regards to flood control and hydroelectric power, there are important unanswered questions about how quickly the reservoir should be filled, and how it will be managed long term,” said Essam Heggy, a NASA Jet Propulsion Laboratory scientist who recently co-authored a study analyzing the potential hydrological and economic consequences of filling the dam at various rates.

“Filling the reservoir too quickly—in less than seven years—could lead to measurable water shortages downstream that impact food production, especially if the initial filling occurs under drought conditions,” said Heggy. His research indicates that rapid filling of the reservoir could lead to severe economic losses, though he notes that expanding groundwater extraction, adjusting the operation of Egypt’s Aswan High Dam, and cultivating crops that require less water could help offset some of the impact. 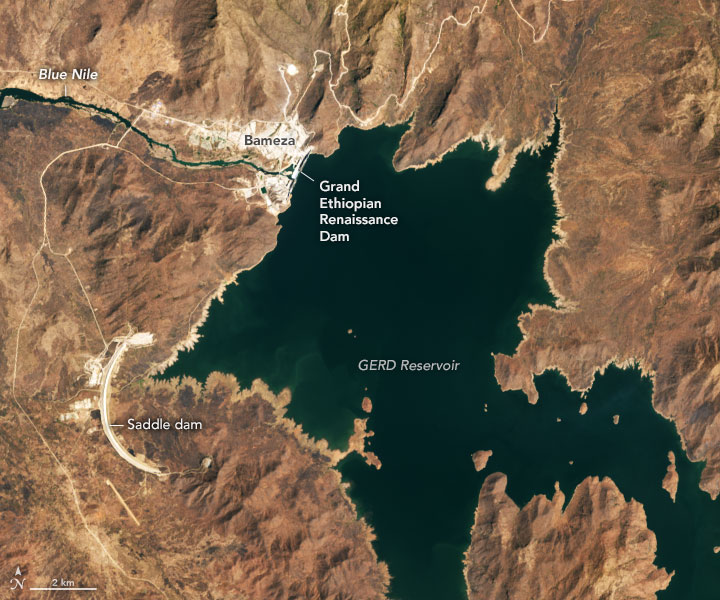 Egypt, Ethiopia, and Sudan have not agreed on a timetable for filling the reservoir or a plan for how the dam will be managed. Meanwhile, remote sensing scientists have used satellites to help track developments at GERD. Satellites offers one of the best ways to monitor developments because the data are free, transparent, and available to all.

As of February 2022, one team led by University of Virginia researchers estimated that the GERD reservoir was less than 15 percent full based on satellite observations. “By combining cloud-penetrating radar observations from the European Space Agency’s Sentinel-1 satellite with a NASA digital elevation model of the terrain, we are able to estimate the change of the volume of water in the reservoir,” explained Prakrut Kansara, a co-author of a study published in Remote Sensing that detailed their technique.

“The reservoir was 23 percent full in September 2021, the end of the rainy season, but then water levels dropped some due to evaporation and water releases,” explained Hesham El-Askary, a professor of remote sensing and earth system sciences at Chapman University and one of the study co-authors. “During the first two years, we have seen a filling rate of roughly 11 percent per year, meaning it would take a little less than nine years to be completely full at this rate.”

The team also used data from NASA’s GRACE and GPM satellites, and results from a NASA model called the global land data assimilation system to analyze the seasonal variability of precipitation, total runoff, and total water storage (which includes  surface, subsurface, and groundwater) in the region since 2002. 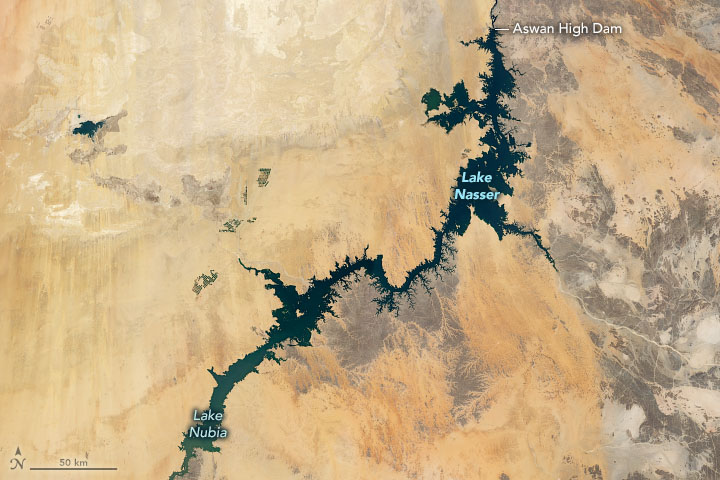 “Our research underscores that the Nile Basin experiences dry and wet spells that are linked to the cycles of El Niño and La Niña,” said Venkataraman Lakshmi, another of the study’s co-authors and a professor of engineering at the University of Virginia. “It’s important that we account for these cycles and that they get built into the planning process. We really need to have scientists, engineers, and diplomats in the same room talking to each other about how to go about filling and managing the reservoir.”

Whatever the rate of filling, there will be plenty of changes to monitor from both the ground and above in the coming years. “Aswan High Dam and GERD together are capable of retaining more than 280 percent of the Nile’s annual flow,” said Heggy. “The world’s longest river will be mainly driven by the operation of two dams rather than by natural processes.”