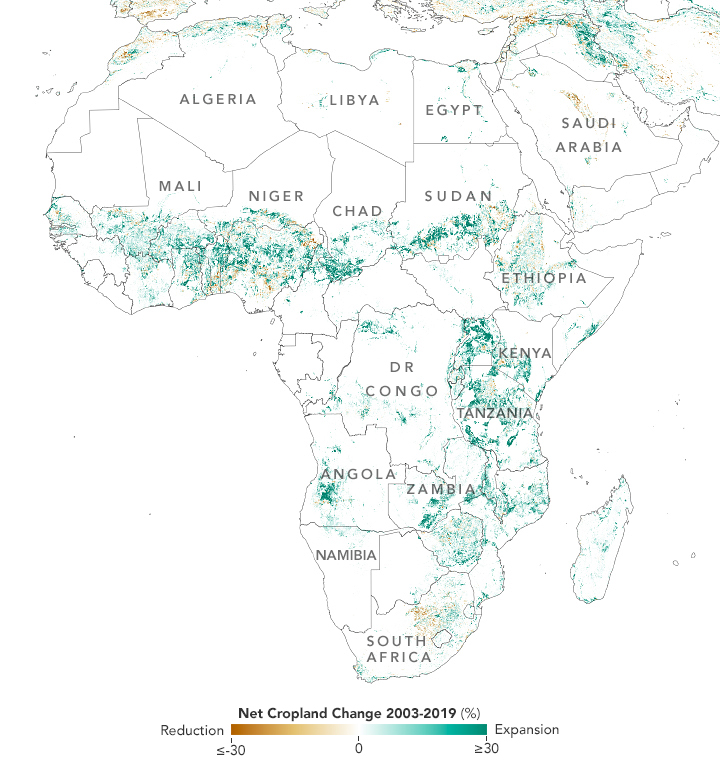 New global maps of cropland from the University of Maryland show that Africa—like South America—has been a hotspot of farmland expansion in the past two decades. In fact, no other continent added as much new farmland. Nearly 79 percent of those new croplands were carved out of natural landscapes rather than pasture or abandoned farmland.

While the rate of cropland expansion slowed in South America over the past two decades, it accelerated in Africa. There was a more than twofold increase from 2016–2019 compared to 2004–2007. As the map above shows, countries in West, Central, and East Africa all saw large increases in cultivated land.

“In Africa, a number of different processes contributed to the changes,” said Peter Potapov, the co-director of the Global Land and Discovery (GLAD) Lab at the University of Maryland. "You have population going up and thus more subsistence farming happening in poorer areas, especially in the Sahel. But in some countries, you also have major foreign investments, especially from China, to establish operations to produce goods for export.”

In some countries—like Angola, Democratic Republic of the Congo, Mozambique, and Zambia—rapid increases in cultivated areas and modest population growth resulted in increases in per capita farmland. In Senegal, Ethiopia, and Nigeria, rapid population growth outpaced the establishment of new farmland, resulting in significant declines per person. In countries where people rely heavily on subsistence farming for food, this can be a warning sign of potential food insecurity.

Analyses of satellite measurements of net primary productivity (NPP) indicate that many of the new cultivated areas in West Africa have relatively low productivity, particularly in areas where grasslands have been converted to farmland (such as the Guinean savanna). Net primary productivity is a measure of how much energy plants store through photosynthesis.

Farmland also expanded into areas that were mostly forested, with these areas tending to have a much higher NPP values, explained Felicia Akinyemi, the lead author of a separate analysis of cropland change led by University of Bern researchers. As urbanization and development has pushed farmers out of lands closer to population centers, often new farmlands in Africa are established in remote forests and grasslands far from major roads and population centers, according to Akinyemi’s research.

Overall, the world showed a 25 percent increase in net primary productivity on croplands over the past two decades, a sign that large-scale farms that make heavy use of machinery and fertilizers have found ways of increasing productivity per acre. In Africa, countries with more fertile soils and forests—mostly in central and eastern parts of the continent—tended to have croplands with higher NPP than those in the more arid Sahel region.

“We’ve seen huge leaps in productivity and yields in the past, and that’s going to continue to be key to feeding everybody in the future,” said Potapov. “But we have to do this in an environmentally sustainable way. If you look at the whole picture—including cropland changes, forest changes, urbanization and development—it’s pretty clear that we cannot just continue to chew up more and more forests and other natural lands indefinitely. Eventually, we’ll simply run out of land.”