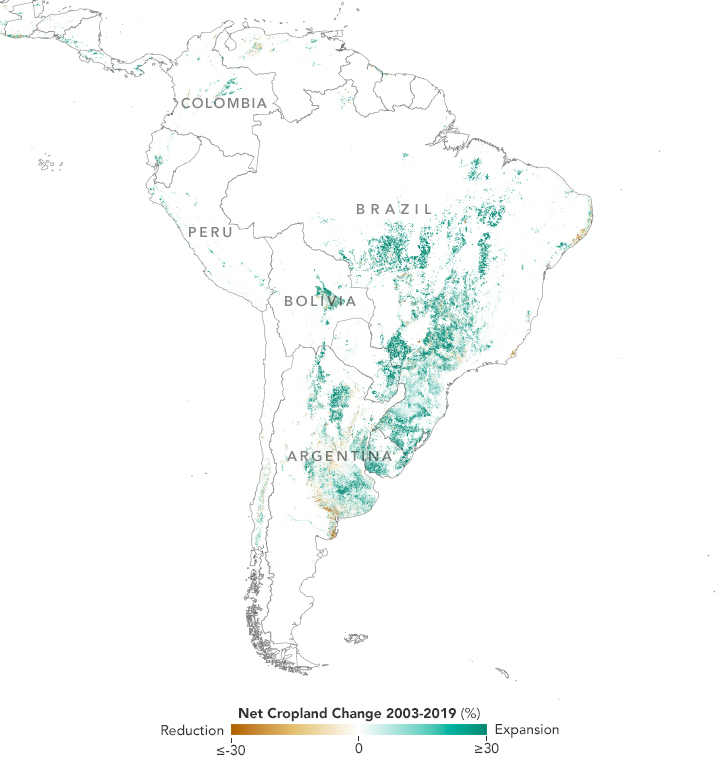 The Spread of Soy in South America

New satellite mapping of Earth shows a significant expansion of croplands during the past two decades. While most regions of the world saw modest increases in the area dedicated to cropland—which mirrored increases in population—one region that stood out was South America. With its cultivated land area nearly doubling between 2000 and 2019, the continent had the largest relative increase in cropland in the world.

“With only a modest population increase during that time period and a large expansion of cropland, it was also the only large region that saw a per capita increase in cropland area,” said Peter Potapov, co-director of the Global Land and Discovery (GLAD) Lab at the University of Maryland. This was mainly due to rapid expansion of farmland in Brazil, Argentina, Paraguay, Bolivia, and Uruguay.

As other GLAD projects have detailed, the area cultivated for soybeans in South America doubled in the past two decades. Most of the new soy crops are located in savanna and dry forest regions—the Cerrado in Brazil and the Gran Chaco in Argentina, Paraguay, and Bolivia.

However, some new croplands have eaten into rainforests. For instance, soybean fields in the Brazilian Amazon increased more than tenfold over the two decades. About 32 percent of the new fields were planted among primary tropical rainforests, often in areas that had first been cleared for cattle pastures.

“In South America, we’re not generally seeing an expansion of farmland due to subsistence farming,” said Xiaopeng Song, a GLAD researcher. “It is mostly large-scale growers who are raising soy for animal feed to meet the increasing demand for meat in China and Europe.”