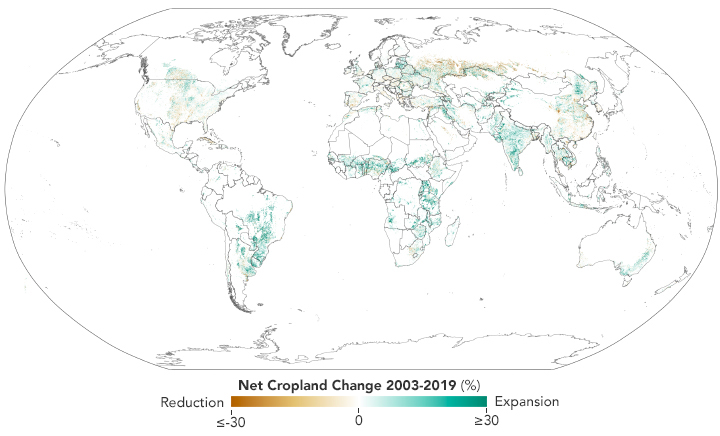 Earth’s population grew from 6.4 billion to 7.7 billion people during the past two decades. Experts project global population will approach 10 billion by 2050. That’s a lot of new mouths to feed.

In a world where food producers already face serious challenges—including climate change, urbanization and development of farmland, and ongoing human conflicts—growing populations put extra pressure on farmers and ecosystems to produce enough food. New mapping from the Global Land Analysis & Discovery Lab (GLAD) at the University of Maryland could help. Researchers there have assembled detailed maps of global cropland change.

According to the GLAD team analysis, the total land area covered by crops has increased , since 2003 by 9 percent, or 1 million square kilometers (about 400,000 square miles). That’s an area about the size of Egypt. Half of the new cropland replaced other natural vegetation such as grasslands or forests. The other half came from the recultivation of abandoned farmland or conversion of pastures.

The new maps, which show changes between 2003 and 2019, are based on imagery collected by Landsat satellites and were published in the journal Nature Food. By adding NASA data on the net primary productivity of croplands, the researchers also estimated whether cultivated areas grew more or less productive over time. Net primary productivity is a measure of how much energy plants store through photosynthesis.

In the hands of farmers, economists, conservation groups, and policymakers, such information could make it easier to balance food production needs with the preservation of ecosystems, the protection of biodiversity, and efforts to sequester carbon and slow climate change.

“People have used satellites to map cropland extent before. What distinguishes this effort is that we are showing change over a long period of time,” said Peter Potapov, the co-director of GLAD and the lead author of the study. “We also do it in a way that is consistent across international borders so we can compare what is happening in different regions or countries in a meaningful way.” Most previous attempts to map and compare farmland relied on the compilation of local or regional data via methods and definitions that varied significantly. 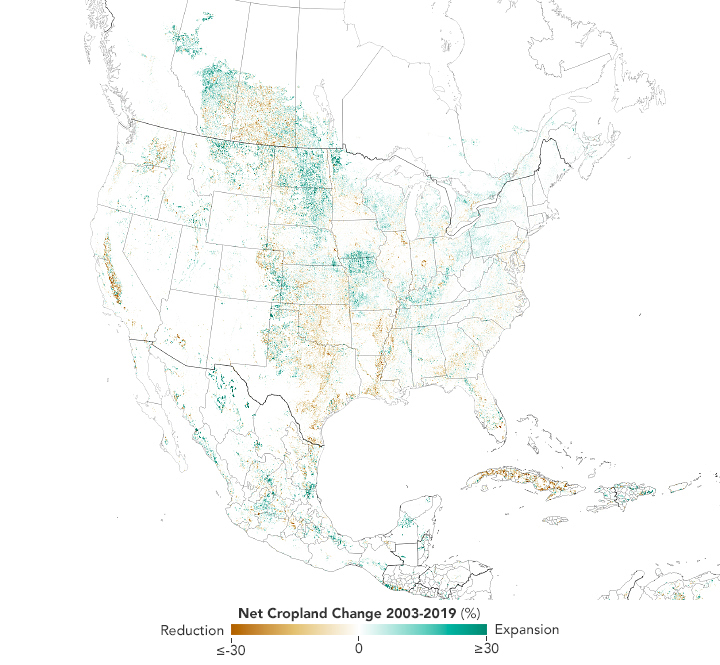 In North America, Europe, and Southeast Asia, total cropland stayed roughly the same. However, some of these areas saw significant shifts in where farmland was located. In the United States, a trend toward new corn, wheat, and soybean plantings in Great Plains grasslands offset the abandonment of significant amounts of land in the eastern U.S. In China, farmland increased in arid areas of the west even as rapid urbanization and a growing aquaculture sector nibbled away at it around eastern cities and coastlines.

The researchers noted that Russia began abandoning large amounts of farmland following the dissolution of the Soviet Union in the 1990s, when the government ended subsidies that had made it possible to raise crops on subpar land. The Baltic states of Lithuania, Latvia, and Estonia had the opposite experience. The breakup of the Soviet Union led to large increases in croplands as these states became more integrated into global markets. Ripple effects of that breakup also affected the agriculture sector in Cuba, leading to a loss of subsidized access to fuel and fertilizers and a transition to a less-mechanized style of farming that contributed to farmland reductions over time. Saudi Arabia saw widespread abandonment of farmland for different reasons: groundwater scarcity prompted authorities to lift subsidies for wheat farmers and limit wheat exports.

The expansion of cropland looks somewhat different when accounting for population changes. Since global population increased by more than one billion people, the amount of cropland per person declined slightly from 0.18 hectares in 2003 to 0.16 hectares in 2019. Likewise, net primary productivity (NPP) increased by 3.5 percent due to more intensive farming practices.