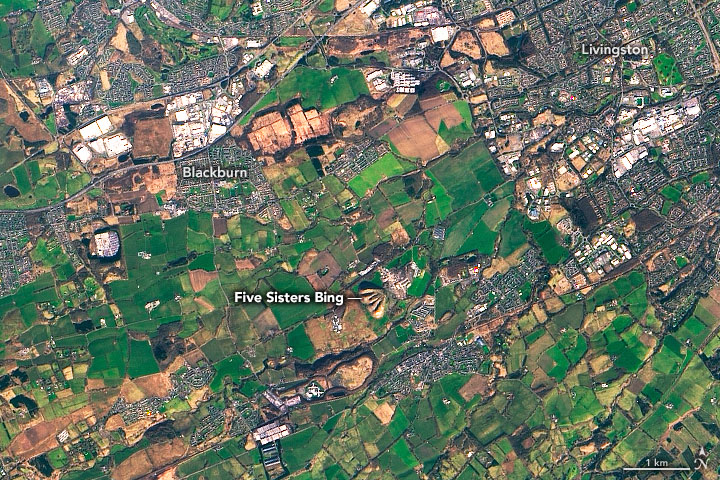 For at least a thousand years, humans have been the biggest agent of geologic change on the planet. Through agriculture and mining—and the resultant erosion they cause—humans move more earth than all natural agents of erosion (wind, water, and ice) combined.

In Scotland’s West Lothian region, roughly halfway between Edinburgh and Glasgow, the effects of more than a century of mining are still highly visible in the form of 19 large spoils heaps. Locally called bings, these piles of waste rock are remnants of shale mining that occurred between 1851 and 1963. The tallest bing rises 95 meters (310 feet) above the surrounding land.

One of the largest bings in area is the Five Sisters Bing in the village of West Calder south of Blackburn. The bing, which rises to a height of 73 meters (240 feet), is shown in this image acquired on March 8, 2022, by the Operational Land Imager-2 (OLI-2) on Landsat 9.

Construction of the Five Sisters, also called the Westwood Bing, began during World War II. It owes its large size and unique five-fingered shape to the introduction of motorized conveyor belts and carts on rails to haul and tip the spoils. This mechanization produced longer, higher, and steeper bings.

The shale became a valuable fuel source when Scottish chemist James Young discovered and patented a process to distil kerosene, or paraffin oil, from the oily rocks. Kerosene was a welcome replacement for whale oil, which was then the primary source of lamp fuel.

The oil shales formed during the Carboniferous Period, about 340 million years ago, when Scotland lay near the equator. The land that would become West Lothian was then a shallow coastal plain that periodically flooded. This formed an ancient lake that was cut off from mixing with the ocean. When that happened, ancient Lake Cadell stratified, and massive algal blooms thrived in the oxygenated surface waters. When the algae died, it sank to the oxygen-starved lake bottom, where it built up thick mud deposits. Over time, this organic-rich mud was buried, compressed, and heated, forming oil shales.

Since the mining era ended here in the 1960s, efforts to manage and remediate the bings have varied depending on their ownership and soil chemistry. Early attempts to beautify some with ornamental plantings often failed to take root. Later attempts, focusing on the unique ecology of the sites, helped cultivate more biodiverse ecosystems that have been turned into parks and recreational spaces. The bings, once seen as a blight on the land, are now distinctive local landmarks, as well cultural and historical attractions on West Lothian’s Shale Trail, a walking and cycling route.