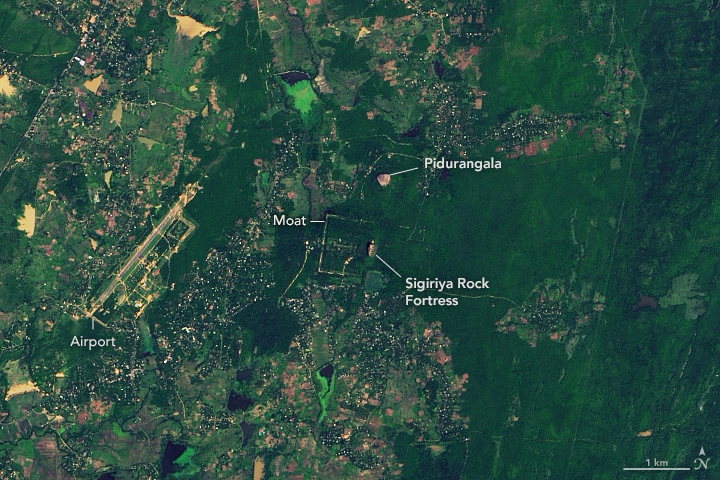 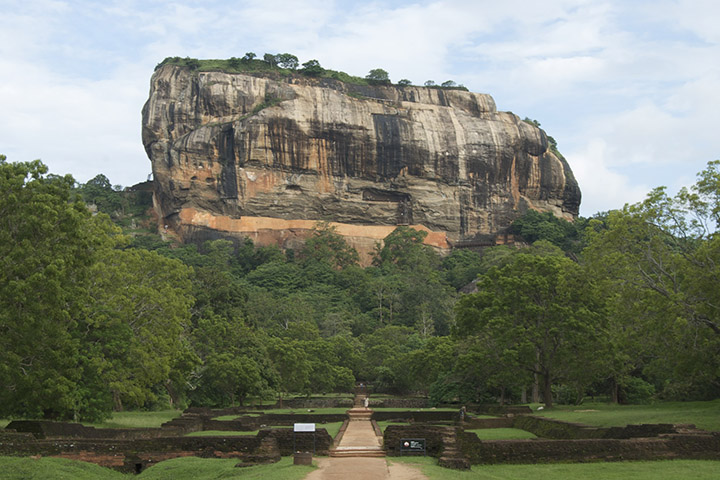 Two billion years ago, the piece of land that now makes up north central Sri Lanka had several active volcanoes. Though most of these ancient features have been worn away, their remnants persist in the form of towering pillars of rock that soar above the surrounding plain.

Two of these features—geologists call them inselbergs—are visible in the satellite image shown above. The tower of rock that appears in the center of the image, Sigiriya, has sheer cliffs that rise as high as 180 meters (600 feet) above the surrounding landscape.

Fifth-century king Kasyapa had a palace and fortress built on Sigirya’s relatively flat summit, along with a protective moat and an expansive water garden at the base. With as many as one million visitors each year, Sigiryia is one of Sri Lanka’s best-known historical sites. It was declared a UNESCO World Heritage Site in 1982. The photograph above shows the inselberg seen from the water garden. The photograph below shows ruins on the summit.

About a kilometer to the north is Pidurangala, a geologically similar feature. When Kasyapa built his palace on Sigiryia, the Buddhist monks who had been living there were relocated to Pidurangala. The temple complex at Pidurangala remains today and includes a series of caves filled with ancient Buddhist sculptures and paintings.

Both of these inselbergs were likely volcanic plugs, funnel-shaped hunks of igneous rock that formed within volcanic vents. The plugs (or necks) are made of hardened magma that crystallized into erosion-resistant granite or other igneous rocks. The plugs separated large magma chambers below and vents at the surface.

The Operational Land Imager (OLI) on Landsat 8 acquired the image shown at the top of the page on October 23, 2021.