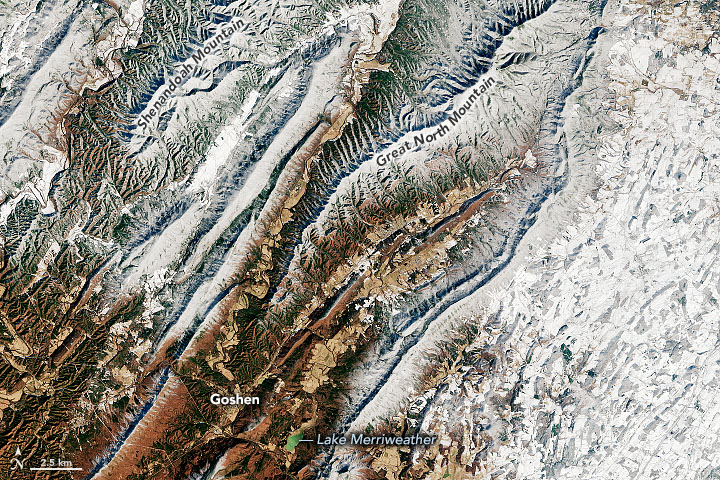 Winter in the Appalachians

Another blast of winter weather passed over the eastern United States in mid-February 2022. Though the storm was less substantial than the nor’easter in January, it managed to drop enough snow to accent parts of the Appalachian Mountains.

This image, acquired on February 15, 2022, by the Operational Land Imager-2 (OLI-2) on Landsat 9, shows the snowy ridges and valleys in western Virginia. Part of the Shenandoah Valley is visible in the southeast, along with the southern ends of Great North Mountain and Shenandoah Mountain to the west.

According to the National Weather Service, snowfall on February 13 was the heaviest in Rockbridge and Bath counties, where as much as 5 inches (13 centimeters) had accumulated. Warm ground caused some of the snow to melt away by the afternoon, but cold air temperatures over the next few days helped some snow persist through February 15, when Landsat 9 passed over. The ground appears bare in the town of Goshen and along some of the river valleys. 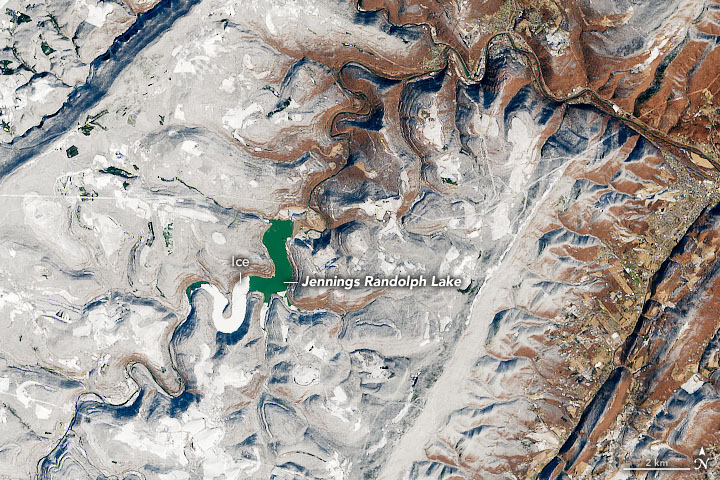 Areas to the north also received a dusting of white. This image shows Jennings Randolph Lake, located about 100 miles (160 kilometers) north of Goshen. The lake spans a 5.5-mile length of the North Branch of the Potomac River, along the border of Maryland and West Virginia. The lake formed following construction of a dam in 1982. The dam was designed to control flooding, dilute pollution downstream, supply drinking to the Washington D.C. area during drought, and provide recreation.

The climate in this part of the Appalachians is generally less harsh than areas in the northern part of the range. Still, winter can bring cold temperatures and heavy snowfall. Notice that almost half of the reservoir is frozen over.

After the snow and ice melt away and spring and summer warmth take over, the reservoir becomes a favorable spot for swimmers, boaters, and anglers. The lake is known for its large bass and walleye, and it is the site of numerous fishing tournaments.