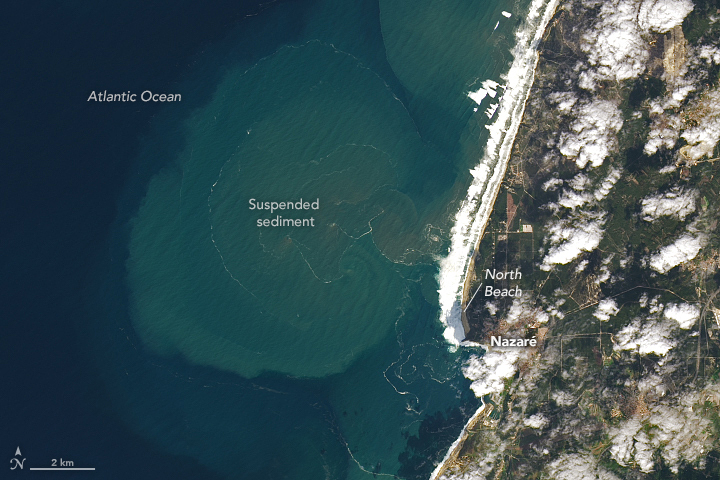 Big-wave surfers need more than skill, strength, and courage; nature and geography also must cooperate. The waters off Nazaré, Portugal, cooperate in a big way. Just-right conditions there have churned out some of the largest waves ever surfed.

In winter, the waves off North Beach (Praia do Norte) average about 15 meters (50 feet) high. On an exceptional day, surfers can catch a wave towering around 24 meters (80 feet). October 29, 2020, was one of the exceptional days: That’s when Portuguese surfer António Laureano might have surfed a 101.4-foot wave. Wave height analysis can be tricky, but if confirmed, it would surpass Rodrigo Koxa’s 2017 record of 80 feet, also set at Nazaré.

The huge amount of energy associated with the big-wave conditions on October 29, 2020, is evident in this satellite image, acquired that day with the Operational Land Imager (OLI) on Landsat 8. The second image, acquired on February 5, 2022, shows the same area on a more typical winter day.

According to José da Silva, an oceanographer at University of Porto, the white band parallel to the shore is foam produced by breaking waves. The foam is visible in both images but is much more extensive in October 2020. Farther offshore, thin filaments of foam snake across the ocean surface. This happens when two surface currents collide; water gets pushed downward, but the foam floats and accumulates along the margins.

Also notice the green plume extending about 10 kilometers from the shore. Da Silva thinks this is the result of seafloor sediments that have been re-suspended by the waves before and after breaking. Recent research by da Silva and colleagues showed that occurrences of green plumes in Portuguese coastal waters are more closely associated with large waves than with increases in rainfall (which causes rivers to discharge sediment). 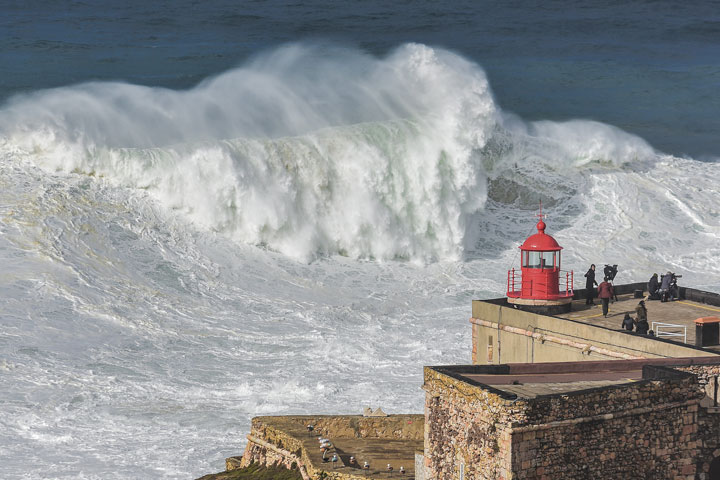 Data show that on October 29, 2020, the offshore wave height measured more than 6 meters high, with a wave period of 17 seconds. This is before the waves rise as they begin shoaling and breaking closer to shore; surfers would be riding much taller waves nearshore. For comparison, the wave height offshore on February 5, 2022, measured just over two meters, with a wave period of 11 seconds. According to news reports, the exceptionally large and energetic swell in October 2020 was influenced by the remnants of Hurricane Epsilon and a low-pressure weather system near Greenland. Wind-driven waves can originate from such distant storms.

But storm systems alone don’t explain why the waves off Nazaré are routinely so large. The waves here are magnified and focused by a deep underwater canyon measuring 210 kilometers (130 miles) long and coming to an end at Nazaré Bay. The part of a wave traveling in deep water—over the canyon—moves faster than the part of the wave in shallow shelf water. This difference in speeds makes the wave appear to bend—in this case approaching North Beach from the west or southwest. These waves ultimately run into waves approaching from the northwest, which never passed through the canyon. The pattern of interference—large wave meets large wave—can result in the supersized waves famous at Nazaré.

Visitors travel great distances to witness Nazaré’s monster waves and to watch surfing competitions. But long before Garrett McNamara popularized the area in 2011 as a big-wave surfing spot, people living in the centuries-old fishing town have lived side-by-side with the magnificent waves. Sometimes they have brought grief, claiming the lives of fishermen; other times they have brought joy, generating a playground long appreciated by local bodyboarders.