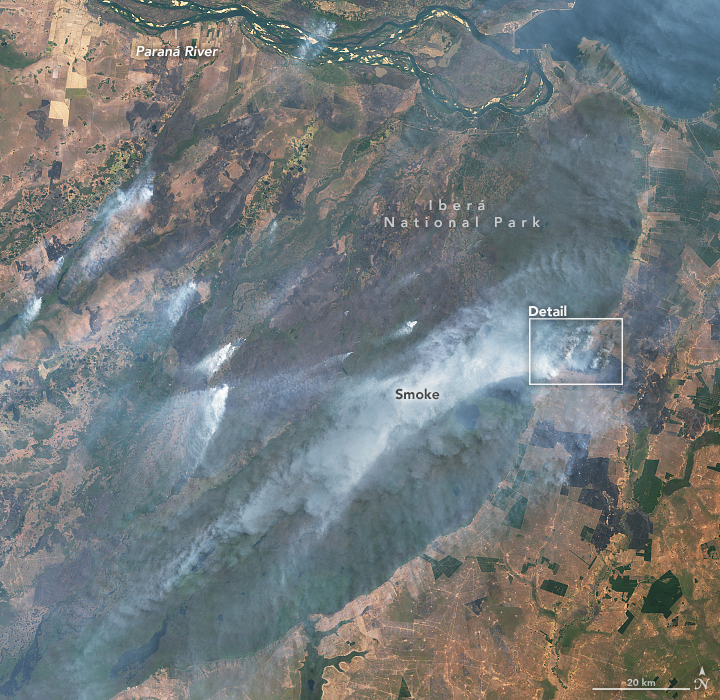 Amidst a record-setting heatwave and ongoing drought, northeastern Argentina has been experiencing widespread wildfires. In late January 2022, more than a thousand fires were burning around Corrientes province, a predominantly rural and agricultural region that has seen little to no rain in two months. Since the fires began in December, more than 520,000 hectares (1.3 million acres) have burned, killing wildlife and livestock, decimating pasturelands, and destroying crops such as yerba mate and rice.

On February 7, 2022, the governor of Corrientes declared a state of emergency and an agricultural disaster, retroactive to January 1. The same day, the National Institute of Agricultural Technology (INTA) estimated that the fires had affected roughly 6 percent of the province, which lies between the Paraná and Uruguay rivers near the border with Paraguay.

The images on this page, acquired by the Operational Land Imager-2 (OLI-2) on Landsat 9 on February 16, 2022, show the scorched fields and heavy smoke from the multiple wildfires still burning near Iberá National Park. 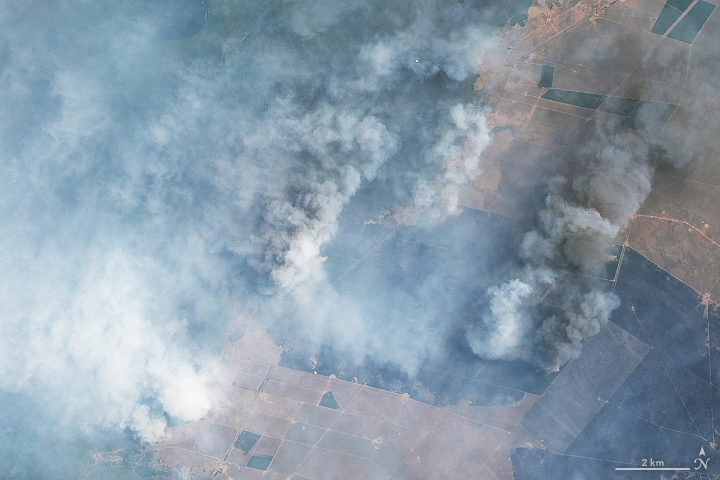 Drought began in November 2021 and has continued into February, as Argentina experiences its second La Niña summer. During La Niña events, clouds and rainfall become more sporadic over the central and eastern Pacific Ocean, which can lead to dry conditions in Brazil, Argentina, and other parts of South America. Corrientes, which normally averages 162 millimeters (6.5 inches) of rain during February, has received less than 20 millimeters (1 inch) so far, according to the National Meteorological Service (SMN).

The dry conditions have been exacerbated by extreme heat across central South America, as temperatures repeatedly approached or surpassed 40° Celsius (104° Fahrenheit). On January 11, ground stations in Buenos Aires recorded a temperature of 41.1°C (106°F)—the city’s second-hottest day on record, according to SMN.

On February 10, Argentina’s Secretary of Environmental Control and Monitoring traveled to Corrientes to announce a coordinated response with provincial and local authorities to provide more equipment, including hydrant planes, helicopters, firefighters, and support personnel to help fight the fires.