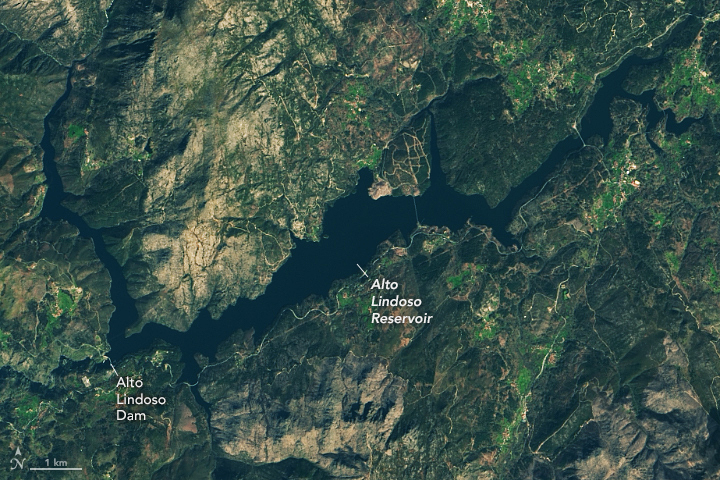 A severe drought that began in November 2021 has worsened significantly, prompting officials in Portugal to limit the use of five hydroelectric dams for power production and irrigation after some reservoirs reached significant lows.

In Spain, the driest January in 20 years has depleted reservoirs to below 45 percent of their capacity, with Andalusia in the south and Catalonia in the northeast experiencing the worst drought conditions, according to Spain’s State Meteorological Agency.

The dry spell in Portugal started in November 2021 and worsened in December; by late January, nearly all of the country was experiencing moderate to severe drought conditions, according to the Portuguese Institute of Meteorology. In the middle of what would normally be the wet winter season, 54 percent of the country was experiencing moderate drought, 34 percent was in severe drought, and 11 percent was in extreme drought.

These pairs of images above and below reveal the low water levels and exposed shorelines of the Alto Rabagão and Alto Lindoso reservoirs in northern Portugal. All images were acquired by the Operational Land Imager (OLI) on Landsat 8 on March 6, 2021, and February 5, 2022. 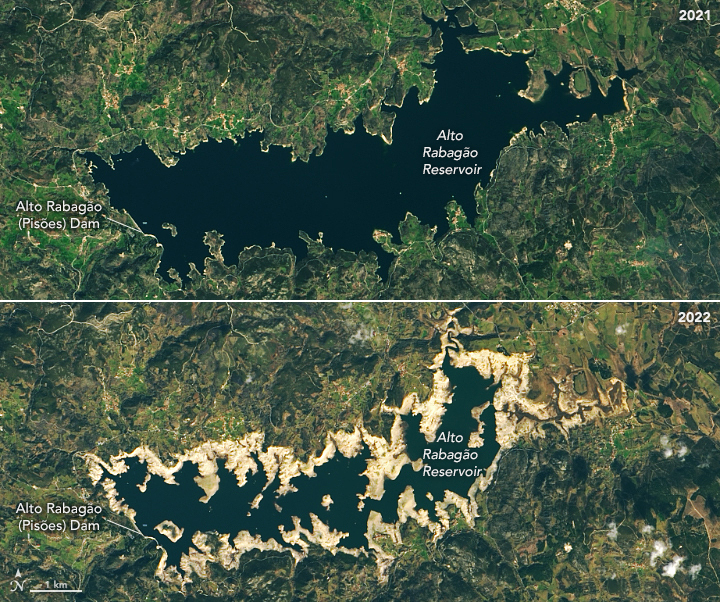 In early February, Portuguese officials announced the Alto Lindoso and three other dam-reservoir systems (not including Alto Rabagão) will limit water usage for power generation to a few hours a week. Portugal has a significant hydropower program with about 60 dams around the country generating 10.6 Terawatt-hours of power in 2019—about 30 percent of the country's energy and half of its renewable energy. One other dam, Bravura, will not be used for irrigation. Across the region, the lack of precipitation has left many farmers struggling to find sufficient grazing land for their livestock.

The depletion of the Alto Lindoso reservoir—which sits along the border of Spain and Portugal—to 15 percent capacity has exposed the long-submerged town of Aceredo, Spain. The reemergence of the village, which was inundated when the reservoir was filled in 1992, has brought tourists to visit the ruins.

The drought is also visible in satellite gravimetry observations made by the Gravity Recovery and Climate Experiment Follow-On (GRACE-FO) satellites, which measure groundwater storage and soil moisture.