A Satellite View of Olympic Terrain

Beijing, the host city for the 2022 Olympic Winter Games, is situated on the northern edge of the North China Plain, near the meeting of the Xishan and Yanshan ranges. (Shan means “mountain” in Chinese.) Bordering the city on three sides, mountains have a long history of shielding Beijing from roving invaders from the steppe regions to the northwest. In the modern context, the mountains make Beijing a viable host for the winter Olympics by providing slopes suitable for alpine skiing, snowboarding, bobsledding, luge, and skeleton.

As shown in the three-dimensional map above, the 2022 Olympic events are clustered in three zones, each with distinct geography. The venues for skating, ice hockey, and curling are indoor events located in the flat terrain of central Beijing. Several events will take place in stadiums originally built for the 2008 Summer Olympics. A 12,000-square meter speed skating oval and a “big air” stadium (for aerial skiing and snowboarding events) constructed on top of a former steel mill are new buildings in the Beijing cluster. Opening and closing ceremonies take place in Beijing National Stadium, also known as the Bird’s Nest. 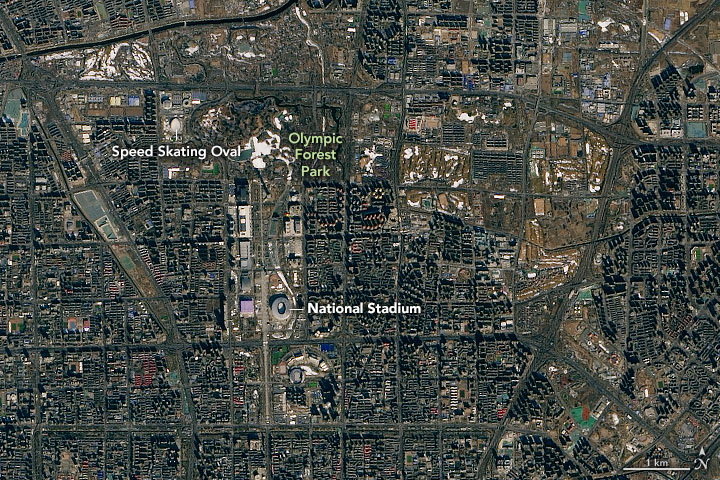 Alpine skiing and the sliding events (bobsled, skeleton, and luge) take place on Xiaohaituo Mountain in Yanqing, a Beijing suburb about 75 kilometers (45 miles) northwest of the city center. Since the region only receives an average of 33 millimeters (1.3 inches) of snow most Februarys, organizers are relying on hundreds of snow machines to create enough snow for the skiing events.

The output from those machines was easy to spot in satellite imagery of the area. On January 29, 2021, the Operational Land Imager (OLI) on Landsat 8 captured an image (above) of the downhill trails covered with artificial snow. The water used to make the snow gets piped in from the nearby Foyukou and Baihepu reservoirs. The alpine skiing routes, situated amidst mostly brown hillsides, have maximum inclines of 68 degrees, making this one of the steepest skiing venues in the world. Tracks from the sliding center are visible just to the southeast near the Yanging Olympic Village. 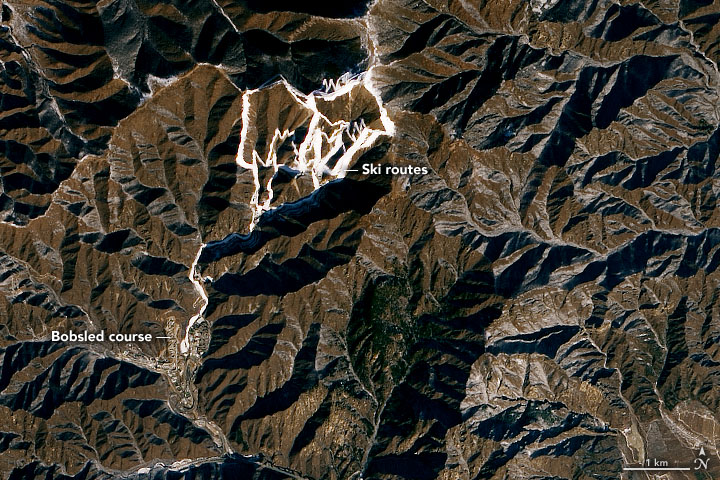 The third cluster of venues is centered in Zhangjiakou, a mountainous area even farther to the northwest of Beijing. Though the inclines are not as steep as in Yanqing, the Zhangjiakou area receives more natural snow. Venues there will host the majority of ski and snowboarding events, including cross-country, nordic combined, freestyle, and biathlon. A newly constructed Beijing-Zhangjiakou intercity railway will transfer people between all three venues in about an hour.

To create the 3D map shown at the top of the page, a natural-color image captured by the Moderate Resolution Imaging Spectroradiometer (MODIS) satellite sensor on February 1, 2021, was overlaid on a digital elevation model from the Shuttle Radar Topography Mission (SRTM).