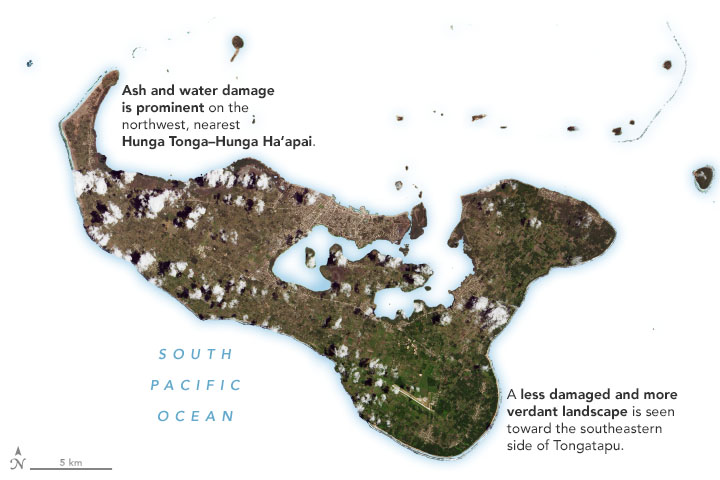 Ever since the uninhabited volcanic island Hunga Tonga-Hunga Ha‘apai exploded in mid-January 2022, the people of Tonga have faced a gauntlet of hazards.

One of the most widespread is volcanic ash. Satellite images collected in the days after the eruption show the fine-grained shards of pulverized rock covering several islands, turning land surfaces from lush green to tan and gray. On January 25, 2022, the Operational Land Imager (OLI) on Landsat 8 captured an image of ash coating much of Tongatapu, Tonga’s most populous island. The closeup images below show the area near Nuku‘alofa before and after the eruption. (Note that the sea water in each image has been masked out in order to focus on land features. The full scene is available for download.)

According to the United Nations, an average of 2 centimeters of ash-coated surfaces in the island nation’s capital city after the eruption. While the extent of damage from the ashfall is still being assessed, preliminary reports indicate that it has contaminated drinking water, disrupted transportation networks, and likely damaged crops. 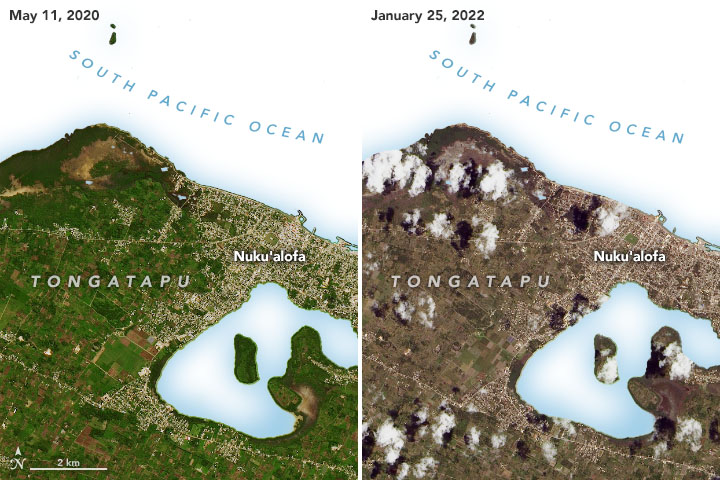 Though it is rare for volcanoes to generate tsunamis, the islands of Tonga were slammed by a series of the destructive waves soon after the eruption. Estimates vary, but the Tongan government reported that waves as high as 15 meters (49 feet) may have struck the west coasts of several islands, including Tongatapu and ‘Eua. The waves washed away cars and buildings, flattened trees, and damaged power lines on several islands. The United Nations reports that three people were killed and hundreds of buildings were destroyed or damaged by the waves.

After major catastrophes, it is not often clear at first which areas are most in need of aid. Damage proxy maps like the one shown above can help governments and first responders gauge where to deploy resources by quickly offering a broad view of possible damages.

The damage proxy map below shows areas on Tongatapu that were likely damaged by the eruption and tsunami. Dark red pixels represent the most severe damage, while orange and yellow areas are moderately or partially damaged. Each colored pixel represents an area of 30 meters by 30 meters (about the size of a baseball infield). Researchers from Nanyang Technological University — Earth Observatory of Singapore made the maps by comparing a post-eruption satellite radar image from January 22, 2022, with pre-eruption images from March 2019 and March 2020. 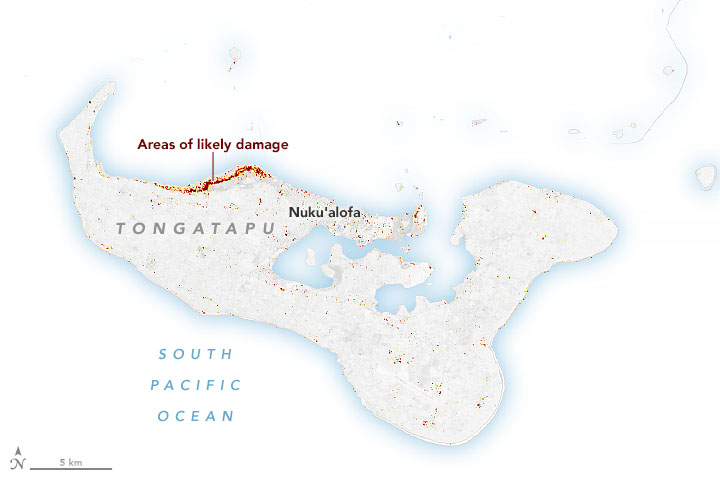 The technique showed an especially severe line of damage along Tongatapu’s northern coast. Other hard-hit areas included small islands north of Tongatapu, including Nomuka, Mango, and Fonoifua islands. One damage assessment from the United Nations Office for the Coordination of Humanitarian Affairs indicates that 100 houses have been damaged or destroyed in Tongatapu.

SAR instruments send pulses of microwaves toward Earth’s surface and observe the reflections of those waves. By comparing signals from before and after an event, researchers can map changes in the land surface and the built environment. The techniques used for these maps were developed by researchers in the Advanced Rapid Imaging and Analysis (ARIA) group at NASA’s Jet Propulsion Laboratory, the California Institute of Technology, and EOS-RS. The ARIA team is supported by NASA’s Earth Science Disasters Program.