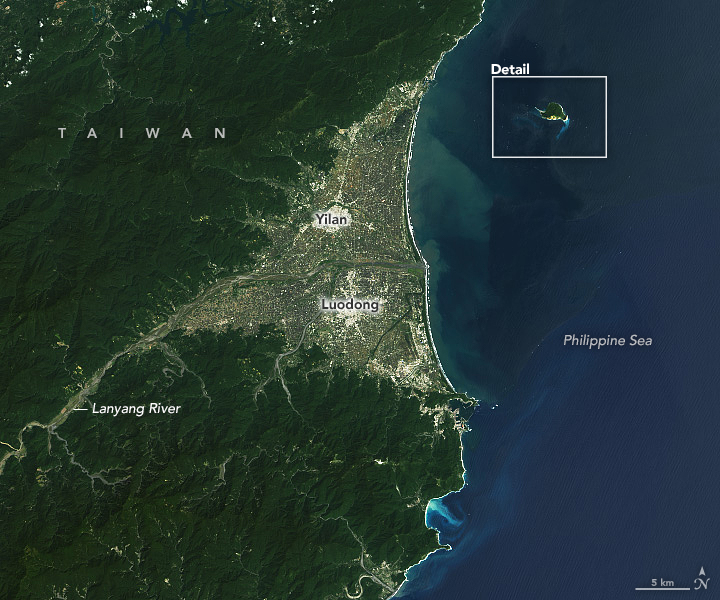 Looking out from the mainland of northeast Taiwan, a turtle-like shape juts above the surface of the Pacific Ocean. Known as Guishan Island, Turtle Island, and Kueishantao, the vegetated rock is the top of a stratovolcano. Its land area spans just under 3 square kilometers (about 1 square mile), but the small island has become a large attraction for tourists and scientists.

The most recent accounts of eruptions from the volcano were recorded during the Qing Dynasty in the late 1700s and from ship observations in 1853. Though the volcano has not erupted in a while, its location at the southern rifting end of the Okinawa Trough means there’s still plenty of action happening below ground and below the waterline.

On September 29, 2021, the Operational Land Imager (OLI) on Landsat 8 acquired these images of Guishan Island. The top image shows its proximity to mainland Taiwan, about 10 kilometers (6 miles) away. The second image (below) shows a detailed view of the island and abundant ship traffic. 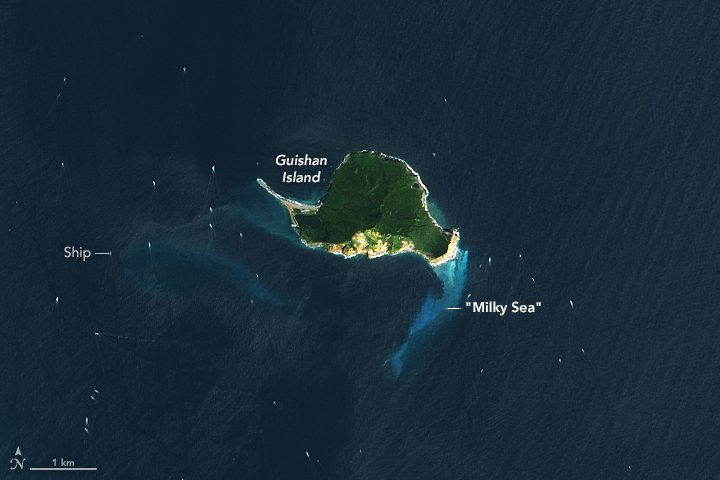 Notice the distinct area of light-blue water near the “turtle’s head.” The discoloration is the result of dozens of hydrothermal vents on the seafloor dispensing sulfur-rich volcanic plumes. Sulfur, sulfur bacteria, and gas bubbles make the water surface appear milky white, earning the area the nickname “Milky Sea.” (This is different from the milky sea phenomenon associated with bioluminescence.) The colorful water attracts tourists and photographers who are undeterred by the pungent smell of sulfur.

The vents are located on the seafloor between 5 and 30 meters (16 and 98 feet) below the surface, making them relatively accessible for scientific study. For years, scientists have been studying the water’s surface and conducting technical dives to see what’s happening below. The vents may be shallow, but the dives are not easy. Water near the vents is hot (about 100°C at the source), acidic, and laden with heavy metals. Bubbles disrupt visibility, and the vents are noisy. Still, the data collected are helping researchers learn about how the earliest lifeforms on Earth might have evolved, and how modern-day marine ecosystems cope with change.

Change at the island is not limited to eruptions. In 2016, Taiwan was jolted by a 5.8 magnitude earthquake and a few weeks later hit by category-5 Typhoon Nepartak. The one-two punch caused landslides, and the debris blocked many hydrothermal vents. Research shows that despite a swift change in the water’s chemical composition and acidity, species living near the vents managed to cope.

In November 2021, spectators witnessed a gas plume rising into the air from gaps in the volcanic rock near the “turtle’s head.” According to local news reports, the plume may have been spurred by earthquakes or falling rocks that widened the gaps through which the gas escapes. 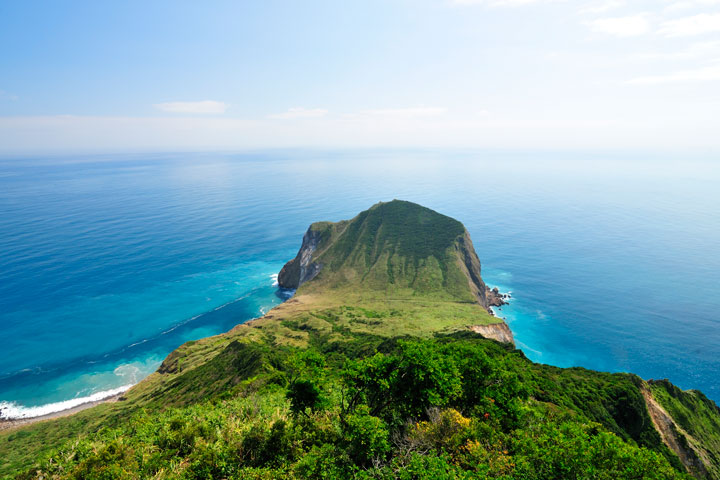 The photograph above shows the view from a lookout on the island, currently open to permitted visitors. As many as 750 people once lived on the island, but by the late 1970s, they all had relocated. From 1977 to 2000, the island was the site of a military base. Today, visitors can sail the “Milky Sea,” watch for pods of dolphins, and explore non-restricted parts of the island.