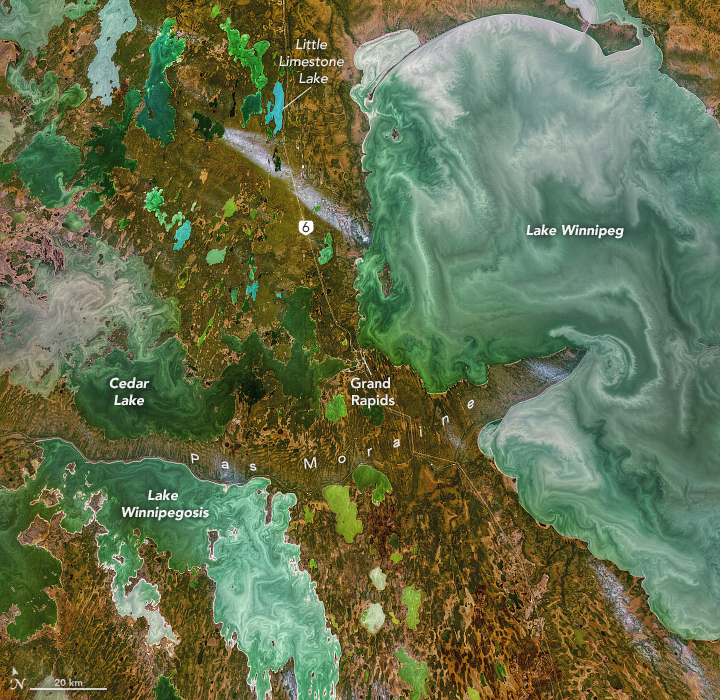 The Manitoba Great Lakes—Winnipeg, Winnipegosis, and Manitoba— are smaller than their more famous Great Lake neighbors to the south, but they can claim more wetlands along their shores. Forty-three percent of the land area of the province of Manitoba, Canada, is covered by bogs, fens, marshes, swamps, and open shallow water.

The origins of the lakes and the wetlands can both be traced to the last ice age. The modern wetlands result from the region’s low-lying topography, which was leveled by advancing and retreating ice sheets. The three Manitoba Great Lakes, however, are actual remnants of glacial Lake Agassiz. This was an ice-dammed lake that formed south of the Laurentide Ice Sheet about 14,500 years ago. At its largest, Lake Agassiz was 1,125 kilometers (700 miles) long and 400 kilometers (250 miles) wide. As the ice dams melted and receded at the end of the ice age, about 8,000 years ago, outlets to the sea opened and the lake drained, leaving behind the deeper lakes we now call great.

The above image, acquired by the Operational Land Imager (OLI) on Landsat 8 on November 3, 2021, shows two of the three great lakes, along with Cedar Lake, in south-central Manitoba. (Note that Norman Kuring, a retired researcher from NASA’s Ocean Biology group applied color-filtering techniques to the image to draw out the fine details in the water. Those features are real but might not be as apparent to the unaided human eye.)

The colorful swirls in the relatively clear and shallow lakes—Lake Cedar’s maximum depth is about 10 meters (32 feet)—are likely due to suspended sediment and phytoplankton. The lakebeds are covered in fine-grained silt, clay, and calcium-carbonate sediments, which give some of the lakes their chalky blue hues. (Little Limestone Lake stands out.) The region is underlain by dolomite, a calcium-magnesium-carbonate rock similar to limestone that was deposited during the Paleozoic Era when the landmass was under a shallow, tropical sea.

The most prominent feature in the region, the Pas Moraine, also has glacial origins. It was formed when a lobe from the Laurentide Ice Sheet, which had advanced from the Hudson Bay lowlands to the northeast, came to a standstill roughly where Cedar Lake is today. The glacier disgorged vast amounts of silt, clay, sand, gravel, and rock that it had scoured from the Hudson Bay area.

When the ice finally retreated, it left behind a 300-kilometer-long (185-mile-long) crescent-shaped mound of rocky debris. The ridge extends from near Clearwater Lake Provincial Park in the northwest (outside the frame of the image) to the tip of Long’s Point in Lake Winnipeg. The moraine is as much 12 miles (20 kilometers) wide in places and stands about 30 meters (100 feet) above the surrounding topography. The lines on its surface, visible in the image, are low ridges that were streamlined by flowing water, interspersed with swales filled with peat deposits.