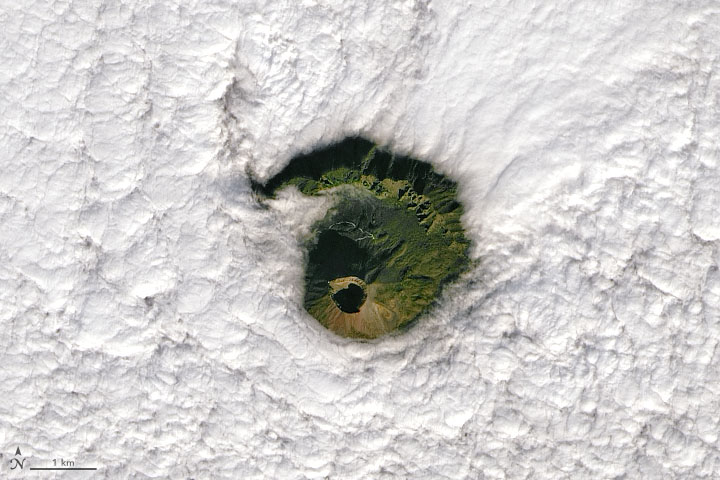 A View of Vesuvius

Mount Vesuvius, located 12 kilometers (7.5 miles) southeast of Naples, Italy, is one of the few active volcanoes on Europe’s mainland. It is part of the Campanian Volcanic Arc which includes the Campi Flegrei caldera/geothermal field to the west of Naples near Agnano and Mount Etna in Sicily. Vesuvius is a composite stratovolcano, made up of pyroclastic flows, lava flows, and debris from lahars that accumulated to form the volcanic cone.

In this natural-color image, acquired on January 2, 2022, by the Operational Land Imager (OLI) on Landsat 8, the cone of Mount Vesuvius appears through a break in the clouds. The ridge surrounding the cone is a remnant of the collapsed caldera of an older volcano, Mount Somma, from which the cone of Vesuvius emerged.

Naples has a population of 3 million people, 800,000 of whom live on the volcano’s slopes. This makes Vesuvius one of the most dangerous volcanoes on the planet. Its most famous eruption, in A.D. 79, destroyed the cities of Pompeii and Herculaneum. The cities were engulfed in pyroclastic flows—superheated, high-density clouds of volcanic gas, ash, and rock that flow downslope at hundreds of kilometers per hour. Pliny the Younger’s eyewitness account of that eruption, including its towering ash cloud, led volcanologists to term these types of eruptions “Vesuvian” or “Plinian.”

Such catastrophes are why the area became home to the world’s first volcanological observatory, built in the 19th century. Today, Vesuvius remains one of the most heavily monitored and studied volcanoes in the world. By dating lavas, scientists know that the mountain has had eight major eruptions in the past 17,000 years. The most recent, on March 17, 1944, destroyed the village of San Sebastiano, Italy. Since then, the volcano has experienced occasional earthquake activity, ground deformation, and gas venting from the crater.