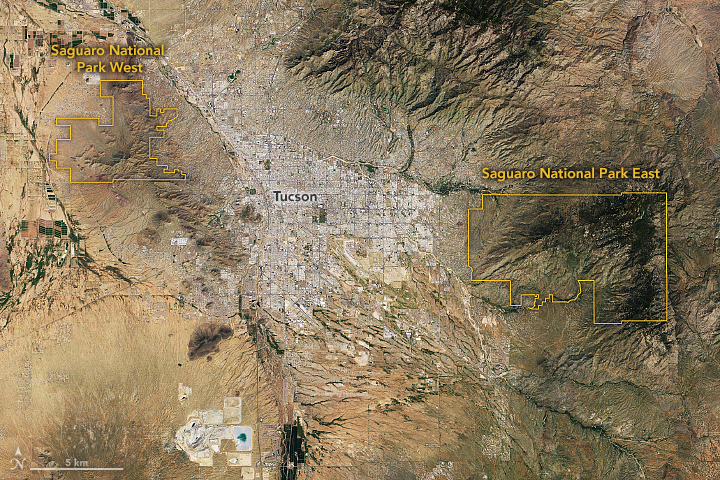 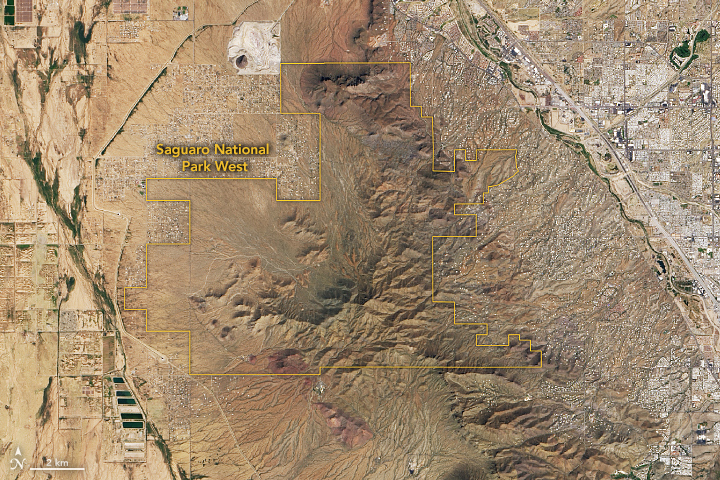 The saguaro cactus (Carnegiea gigantea), with its spiny, branching arms, is an icon of the American West. It is also the largest cactus in the United States, growing up to 60 feet (18 meters) tall. The saguaro only grows in the Sonoran Desert, with its habitat range limited to southern Arizona, southeast California, and western Sonora, Mexico. Although not listed as threatened or endangered, the saguaro is protected by state laws against harvesting or destruction.

Saguaro National Park, shown in these two natural-color images acquired on September 21, 2021, by the Operational Land Imager (OLI) on Landsat 8, was founded to protect the iconic species. The park covers about 145 square miles (37,000 hectares) of the Sonoran Desert around Tucson, Arizona. It is split into two sections: the eastern Rincon Mountain District, bordered by the Coronado National Forest, and the western Tucson Mountain District, which is shown in the closeup image. The western district formerly held 137 mining sites where copper, lead, silver, and molybdenum were mined from the mid-1800s to the early 1900s. In 1933, Saguaro was established as a national monument. It became a national park in 1994. Today, the area around the western district is dotted with neighborhoods.

Under the right conditions, saguaro cacti can live to be 150 to 200 years old. The extremely slow-growing saguaro is particularly sensitive to temperature range and water abundance, and highly variable or extreme weather can stress the plants and limit reproduction. In Saguaro National Park, scientists have long monitored the climate. Over the past century, winter minimum temperatures in the area have risen 10 to 15 degrees Fahrenheit (6 to 8 degrees Celsius). Researchers have also recorded less rain falling in the winter, but more in the summer, when the cacti are thought to take up most of their water. When rain is abundant, a fully hydrated saguaro can weigh 3,200 to 4,800 pounds (1,500 to 2,200 kilograms). However, due to drought over the past few decades, fewer young saguaros are surviving in the park.

Ecologists are looking for new tools to help monitor plant populations, and some are training computers to identify plants in remotely sensed images, either aerial or satellite. Some recent studies have used such machine learning to survey and map populations of saguaro, which cast shadows that can be identified in imagery. The researchers suggest such tools could be especially useful for monitoring remote, arid environments.