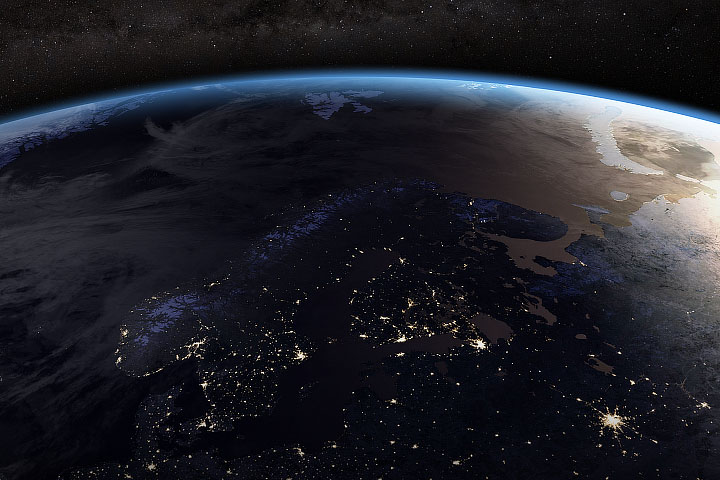 This Image of the Day includes the answer to the December 2021 EO puzzler.

It is the land of reindeer husbandry—one of the few places on Earth where deer have been domesticated. It is the home of Europe’s only recognized indigenous people. It is the ancestral homeland of “the father of satellite meteorology.” Welcome to Nordic Europe.

The image above is part of a global composite assembled from data acquired in 2016 by the NOAA-NASA Suomi National Polar-orbiting Partnership (Suomi NPP) satellite. This nighttime view of far northern Europe was made possible by the “day-night band” of the Visible Infrared Imaging Radiometer Suite. VIIRS was built to be sensitive enough to measure nighttime light emissions and reflections, to distinguish the intensity of lights, and to observe how they change.

The satellite was named for Verner Suomi, a meteorology researcher and revered longtime professor at the University of Wisconsin–Madison. Suomi built a flat-plate radiometer that was launched on the Explorer 7 satellite in October 1959. It was the first of several Earth-observing instruments that Suomi conceived or built over a five-decade career, and he was instrumental in advancing the study of clouds, weather, and the planet’s radiation budget. “When I first began my work with meteorological satellites, no one in the Department of Meteorology seemed particularly interested,” he was once quoted as saying. “But they didn’t try to impede progress in the field, for which I’m forever thankful.”

Though he grew up in Minnesota, Suomi was the son of Finnish immigrants from the Aland Islands. In the Finnish language, Suomi is the name for Finland. 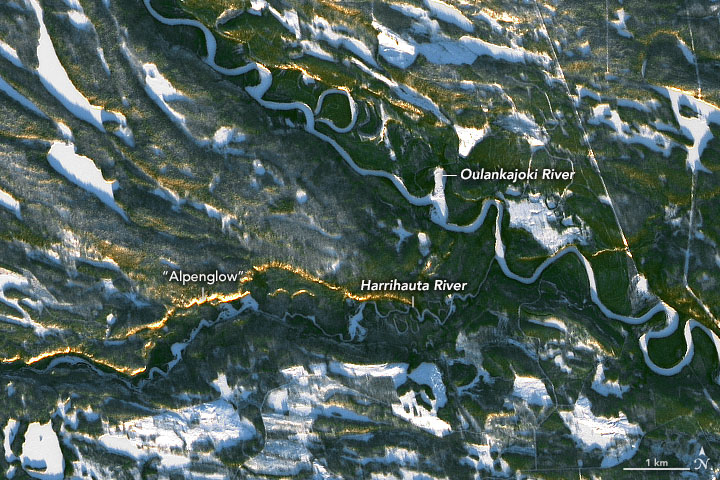 This winter scene comes from the Sápmi region of Finland (formerly known as Lapland), not far from Oulanka National Park. The natural-color image was acquired on January 30, 2014, by the Operational Land Imager (OLI) on Landsat 8. At the time, the Sun was just a few degrees above the southeastern horizon, leading to long shadows in the valleys and golden rays touching the peaks of mountains. Some of the landscape was likely lit by alpenglow, a phenomenon where airborne snow, water, and ice reflect sunlight down toward Earth even if the Sun is below the local horizon.

The Sápmi region stretches across parts of Finland, Sweden, Norway, and Russia, and it is the ancient home of the indigenous Sami people. About 80,000 to 100,000 Sami are spread across the four countries, and they have long lived a nomadic life of hunting and gathering and reindeer herding. An estimated 500,000 reindeer live in Scandinavia, with most of them tended and herded by the Sami.

By some historical accounts, the Sami may have been herding reindeer as far back as the 800s CE. Though electronic tools and motorized vehicles have become part of the now semi-nomadic herding life, the ancient Sami languages are still key to animal husbandry in the rugged and cold region. Reindeer and the herding units that tend them are central to the culture, providing meals, tools, clothing, and a structure to life amid changing times in northern Europe.