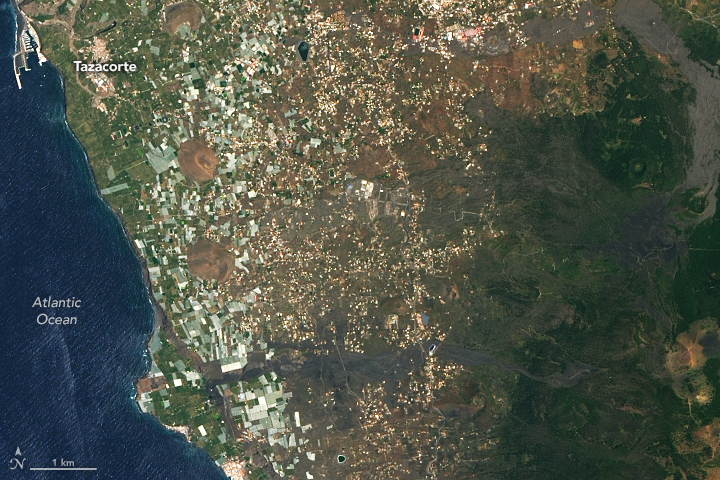 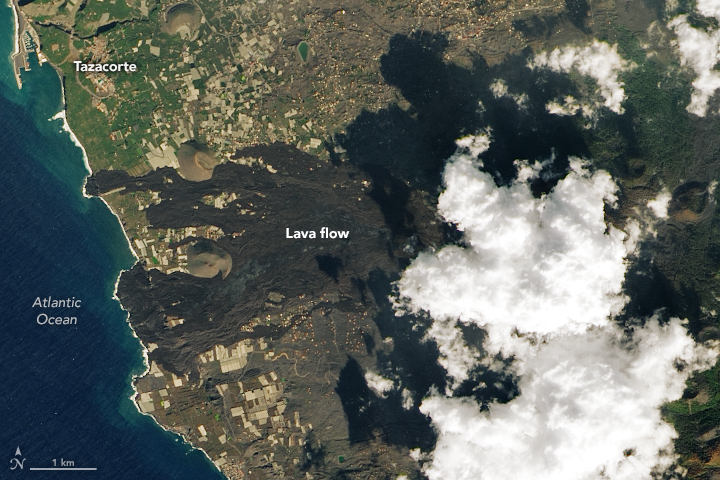 A Changed Landscape on La Palma

Before Cumbre Vieja split open on September 19, 2021, the western flank of La Palma was dotted with houses, roads, pools, and crops. After slow-moving lava flows bulldozed their way down the small volcanic peak in the Canary Islands for months, parts of the island now look more like a moonscape than a tropical paradise.

The Operational Land Imager (OLI) on Landsat 8 captured this pair of natural-color images showing how drastically the Todoque and El Paraíso areas have changed. The first image was acquired on May 21, 2021; the second shows the same area on December 15, 2021. Houses appear as small, white rectangles; many of the larger white and gray rectangles are greenhouses used to raise bananas. The dark remains of a lava flow from a 1949 eruption cuts across the lower third of both images.

The slow-moving lava flows have caused tremendous amounts of damage to homes, infrastructure, and farmland. Some areas that were not directly overrun by lava have been blanketed with ash. According to a mid-December update from the Copernicus Emergency Management Service, the eruption has destroyed at least 1,600 buildings. Lava has consumed at least 12 square kilometers (5 square miles) of land, including at least 4 square kilometers of crops. Initial estimates say that the eruption has caused at least 550 to 700 million euros in damages.

After three months of vigorous lava flows and explosive activity, there are signs that the eruption may be ending. On December 14, geologists with the Canary Islands Volcanology Institute (INVOLCAN) noticed a sharp decline in seismic activity; explosive activity, sulfur dioxide emissions, and lava flows also waned. While activity could pick up again, ten days of inactivity would prompt local scientific authorities to declare the eruption over, according to Canarian Weekly.