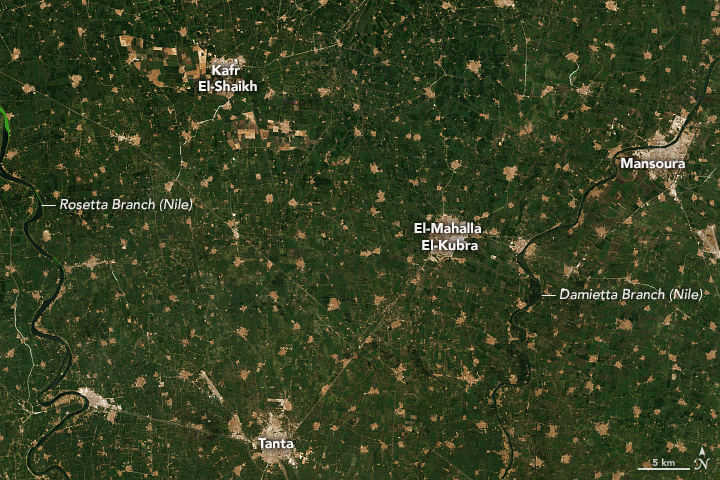 During the time of the pharaohs, the fertile soils along the Nile River likely supported a civilization of roughly 3 million people. Now there are 30 times that number of people living in Egypt, with 95 percent of them clustered in towns and cities in the Nile’s floodplain. Much of the growth has come in recent decades, with the Egyptian population soaring from 45 million in the 1980s to more than 100 million now.

Just 4 percent of Egypt’s land is suitable for agriculture, and that number is shrinking quickly due to a wave of urban and suburban development accompanying the population growth. “It’s not an exaggeration to say that this is a crisis,” said Nasem Badreldin, a digital agronomist at the University of Manitoba. “Satellite data shows us that Egypt is losing about 2 percent of its arable land per decade due to urbanization, and the process is accelerating. If this continues, Egypt will face serious food security problems.”

The pair of Landsat images below shows how much farmland has been lost to development around the city of Alexandria between the 1980s and 2021. Cultivated areas appear green; towns and cities are gray. According to one analysis of Landsat observations, the amount of land near Alexandria devoted to agriculture dropped by 11 percent between 1987 and 2019, while urban areas increased by 11 percent. The images above show urbanization eating into farmland around the cities of Tanta and El Mahalla El Kubra and between the Rosetta and Damietta branches of the Nile. 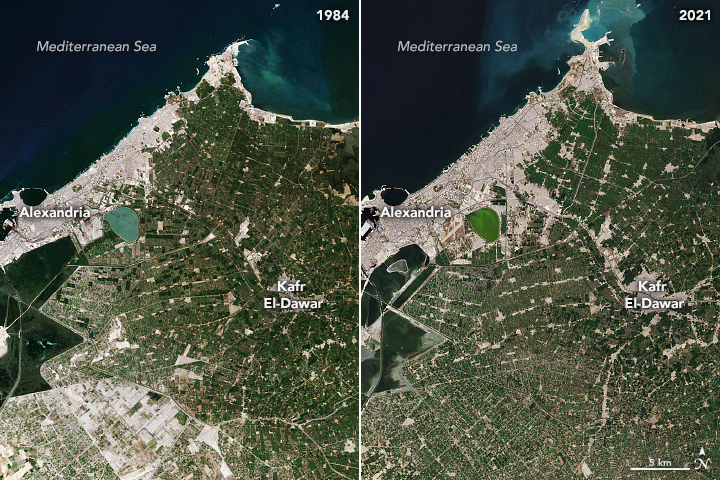 While the conversion of farmland to human settlements here has occurred for decades, multiple researchers observed sharp increases in the practice after the “Arab Spring” roiled the political and economic climate in Egypt starting in 2011. In recent years, Egyptian authorities have vowed to put an end to unlicensed building on farmland, though it remains a difficult practice to stamp out.

Urbanization is not the only process putting pressure on Egypt’s farmland. Sea level rise of 1.6 millimeters per year has contributed to problems with saltwater intrusion and the salinization of farmland in Egypt, particularly in the fringes of the delta southwest of Alexandria. About 15 percent of Egypt’s most fertile farmland has already been damaged by sea level rise and saltwater intrusion, according to the UN Food and Agriculture Organization. While global warming is responsible for about half of the sea level rise affecting the Nile Delta, the sinking of the land (subsidence) is responsible for the other half. Natural compaction, as well as the extraction of groundwater and oil, contribute to subsidence.

One response to the loss of farmland has included efforts to reclaim and green-up parts of the desert. For instance, Farouk El-Baz, Boston University scientist and a member of the Apollo 11 field crew, has long promoted a plan to build an extensive corridor of highways, railways, water pipelines, and power lines to spur development and the establishment of new farmland in deserts west of the delta. 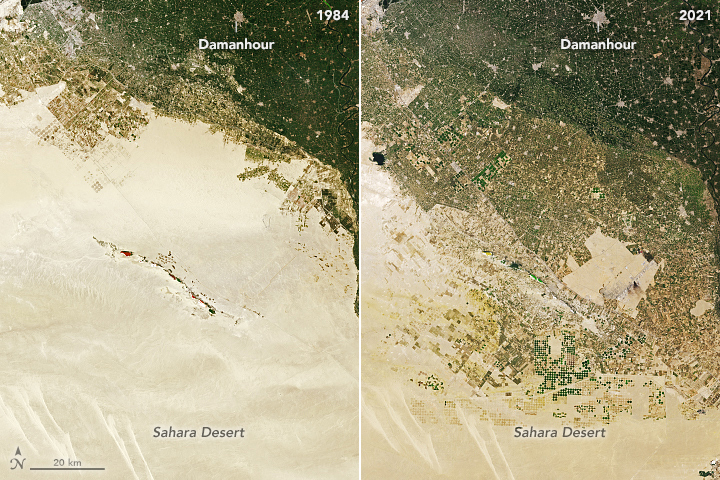 While that project has not come to full fruition yet, large swaths of desert have been converted to farmland in recent decades. The pair of images below shows new farmland and the emergence of several new towns along the Cairo Highway. A mixture of center-pivot irrigation and drip irrigation—fed by groundwater pumps—makes farming in this area possible, explained Badreldin. While small-scale sustenance farming is common in the main part of the delta, most of the growers on the desert edge raise grains, fruits, and vegetables for export abroad.

“It is certainly possible to establish new farmland from the desert by tapping groundwater resources, but it’s a difficult, resource-intensive, and expensive process,” said Badreldin. “The poor soils and the intensive resources needed to farm in the western desert are a poor replacement for the richer, more fertile soils in the delta.”

Boston University researchers Curtis Woodcock and Kelsee Bratley have analyzed decades of Landsat observations as part of a Boston University effort to track how the availability of farmland in the delta is changing over time. “We certainly see expansion into the desert, but there’s nuance to this story,” said Woodcock. “After being farmed for a time, we also see a significant amount of that new farmland being decommissioned and reverting to desert.”